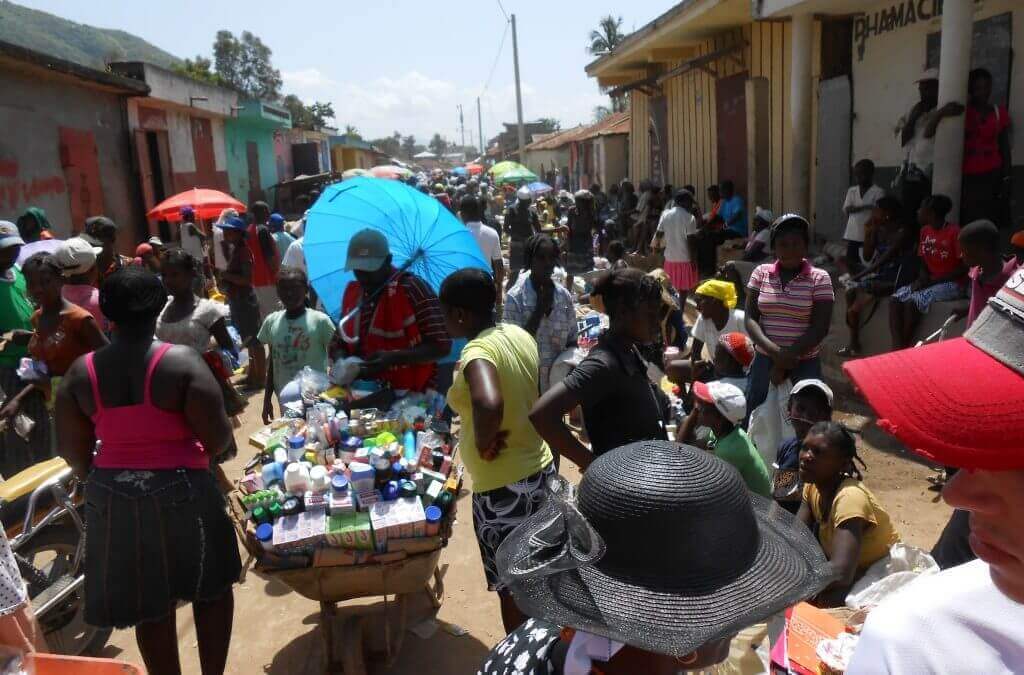 Greetings from Haiti! Today, we woke to church bells and “Joy to the World” being sung by a nearby church choir. It was market day, so the town was buzzing with activity. After breakfast, we ventured to the market and found Haitian children as soon as we left the compound. One little boy in particular ran to Tricia like he had spent a lifetime looking for her. The children grabbed a hand and stayed with us the entire time.

The market was filled with sights, sounds, and smells that many of us had never encountered before. Many of the vendors come from long distances carrying their products balanced on their heads or on a donkey. Large trucks were overloaded with people and all of their stuff rumbled down the streets. There was produce that we could not identify, rice, beans, and lots of animals. We were particularly interested in the animals, as last night we collectively decided to buy 28 goats. Some will go to our sponsor children’s families, while others will be given to Five Loaves for the neediest families. Zeke, with some help, purchased and transported the goats.

The market was very crowded. We have a large group and seemed to be in the way, so we broke up into two smaller groups. Tim and Ebens led one group, while Lucia and Woodsy led the other group. Lucia’s group witnessed a goat being slaughtered in the street; the whole market scene was a little intense. We visited a homeless man and woman who could not walk. It was heart wrenching to think that these people have no one to take care of them. They lie on the cement in a dark shack in a corner of the market. Ebens brings them food twice a week, but that is probably the only food they get.

After lunch, Zeke arrived with his truck filled with 28 goats. What a sight that was! Our next item on the agenda was working at the compound being built by MH4H. We loaded up the trucks with wood, tools, a sample bed, and all the people. The women rode with the goats and stopped at Five Loaves where they dropped off half of the goats. The other truck headed to the new compound. Even though the truck was already overloaded, we picked up three more Haitian men to ride along. There were even people sitting on the roof of the cab and on the lumber. In addition to being packed, the roads are extremely rough, so we are all bruised from bouncing on the edge of the truck. At the compound, we built some shelving for the new dorm. The women sanded and painted the shelves, while the goats made a terrible mess in Zeke’s truck. Some of the young Haitian men washed both trucks. We cannot bring the goats to their new owners until Tuesday, so we are praying that they will still be in the compound when we go back there tomorrow.

When we returned to the Minnesota House, we ate dinner, shared what we experienced, showered, and prepared for another day. In spite of the extreme poverty, the Haitian people seem to find joy in relationships. As we drive down the road, many people smile and wave. The small children get excited and jump up and down yelling to us.

It is heartbreaking to see how neglected people with disabilities are. I suppose they are neglected since everyone is struggling to survive. You feel helpless to not be able to do anything sustainable for these people.

Click here to read about this team’s first two days in Haiti.