A day of surprises

Another day in Haiti; another day of surprises. We awoke to the intoxicating aroma of “Haitian French Toast” which is fried in oil and served covered in syrup. Our balanced breakfast was also accompanied by a healthy serving of fresh pineapple and juice. Delicious. After fueling up and mentally preparing ourselves with another episode of “The Hole in our Gospel”, we filled our water bottles and headed out for another morning with the Thrive for Five children.

We sang a few songs before Lucia booted-up the projector. She proceeded to tell the Jonah story with a humorous fishing demonstration from Jenna and Justine. The kids received worm and butterfly crafts that we constructed the night before, before being aloud to run and play. We inflated a giant fish of sorts, and allowed the kids to go inside. Hopefully that help put Jonah’s dilemma in perspective! The kids and mothers were fed a generous portion of noodles before being dismissed.

Above: The kids made worm and butterfly crafts before getting to crawl inside the “giant fish.”

Ham, cheese, and coleslaw were on the docket for lunch. After our meal, we rested for about an hour, in an attempt to re-energize before the vacation bible school at the compound. Some slept, others talked.

Then things got interesting. As is in Haiti, things don’t often go as planned. The original idea was to have the vacation bible school children move around to different interactive stations, but our intentions were interrupted with a downpour. So instead, we hosted a viewing of Like Mike in French in the shelter house. The children watched intently until the rain let up and began to get restless. 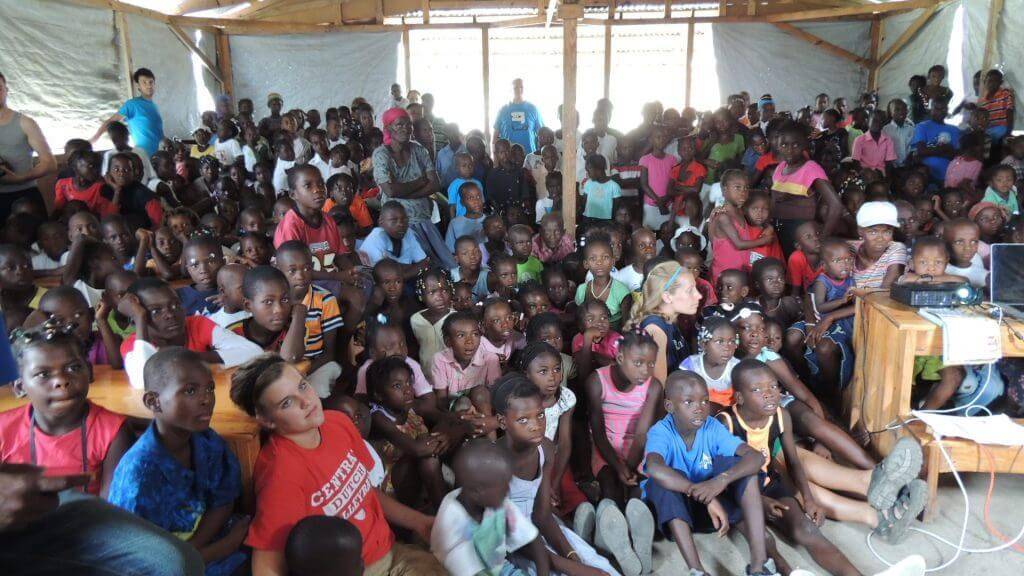 After the conclusion of our feature film, we handed out juice, crackers, and toy cars to every one of the 300+ children. We were blessed with a surplus of juice, meaning we each got a taste. Jessica didn’t want to finish hers, but the guilt she received from the team forced her to dig up her half-empty pouch from the trash to finish it off! We played with the children for a while, which included hula-hoops and a soccer game. They were dismissed as we headed in to enjoy a meal of chicken, rice, and beans. The cooks even prepared a brownie dessert!

We had special guests for dinner; two friends of Cassidy’s English class. They sang with us and told of their work in Haiti. They were incredibly grateful for all that Cassidy and her teaching had provided them. We processed our highs and lows, and headed out to the depot to pack rice for the Thrive for Five children. We spilt into different groups in order to pitch in. Some poured and others passed, while another group measured to assure equal distribution. Despite a few spills and mishaps, the job was a great success!

Tomorrow is our last full day of work here in Haiti, and many have already expressed those they will miss, and the experiences that have impacted them. Some have even said that they feel like their work in Haiti has just begun! We thank God for blessing us all with the opportunity to work and learn on this trip, and we look forward to what He has in store for His people in Haiti.

Want to read more from this team’s time in Haiti? Click here to read about their arrival to the country!