This is written by Pastor David Burling, Memorial Lutheran Church of Nevada, IA.  This was his second visit to Gonaives, Haiti.

Some reflections on the heels of returning from Haiti….

The Dusty Roads of Gonaives

Haiti is a land where there are more motorcycles and mopeds per capita than there are Haitians per capita.  I’m not even sure what that means other than to say there are tons of motorcycles and mopeds on the roads of Haiti and there are no rules to the road.  You go wherever you need to on the street and, apparently, you get there as fast as you can.  It is literally a game of inches.  Hopefully, you live.  The mission owns a motorcycle and one afternoon I decided to take it out for a drive just “for the experience.”  Now, you’ve got a situation.  Lots of motorcycles; going real fast; no rules to the road; and one white guy.  I saw heads turning everywhere and I imagined them thinking, “hey, there’s a fat, bald white guy riding a motorcycle in Haiti.  You don’t see that every day.”  I made it back safely to the mission.  Probably don’t need to experience that again. 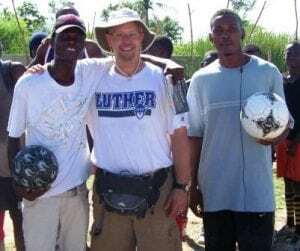 Pastor David with the soccer coaches on last year’s trip.

Jody, Nan, and Mary Ann, my traveling companions; they were wonderful.  It is not an easy trip.  Everything about Haiti is hard.  Life in Haiti is harsh.  For most of the population life in Haiti is about survival; simply making day-to-day.  The number one rule for traveling to Haiti is “be flexible.”  Americans make plans.  Americans carry out those plans in an efficient, predictable way.  We celebrate our achievements and the completion of those plans by making bigger and even more efficient plans.  Haitians don’t necessarily make a plan.  You have some vague idea about the day.  Maybe even some hope.  At the end of the day, efficiency, predictability, productivity, achievement – none of that matters – the question becomes, “was their enough food to give the children at the mission at least one meal that day?”  For many of them that is all they can expect from the day.

Typical scene of a Haitian market.

One morning we decided to experience “the market.”  The women had gone into a store to look around and I decided to stay outside and simply watch the absolute chaos that goes on around buying and selling.  I noticed a group of men who had gathered nearby.  They had taken note of the fat, bald, white guy standing in Haiti.  Again, you don’t see that every day.

In that moment, the image that came to mind was that this is Haiti’s version of the early morning coffee group of men at McDonald’s in Nevada.  One of them spoke very broken English.

I turned and said, “who, me?”  Really Dave?  Who else do you suppose they were talking to?

At this point, I need to tell another story.  When arriving at the airport in Port au Prince you are inundated with Haitians who want to carry your luggage.  They really don’t care about your luggage.  They really want your money.  I had told the group prior to our trip that one of the most stressful moments of the experience is the airport chaos and when approached by someone you need to be emphatic and quite hard-nosed about using the word, “no!”  It will go against every bone in your body, but you cannot open your wallet to every request for money.  In the long run it isn’t helpful and, in fact, can be dangerous.  Jody, Nan, and Mary Ann did very well.  I, on the other hand, gave me backpack – the lightest piece of luggage that we had- to the man standing in front of me.  He literally turned around and put my backpack in the front seat of the car and turned back towards me with his hand out.  There were no words, but it was as if he were saying to me, “Hey, Big Shot.  Give me some money.”   You know where this is going….

Against all my advice and experience and despite my warnings to the group I reached for my money clip.  There was a one dollar bill next to a twenty dollar bill.  I reached for the one dollar and heard the man say, “I have kids.”  I handed him the twenty.  As I got into the car we were silent for a moment.  I couldn’t believe what I had just done.  I said to the group rather sheepishly, “what happens in Haiti stays in Haiti.”  There was more silence.  I could read their minds.  “Big Shot.”

So when the man in the market said to me, “I know you have money.”  I could in clear conscience say to him, “no I don’t have any money.  I gave it all to the guy at the airport.”  I walked away rather proud of myself that I had courageously said, “no!” At least this once….

Every day the children are fed a plate of rice that was packaged and sent from the Nevada food packaging event that was held last April.  Again, for many of the children, that will be their only meal of the day.  We helped distribute their lunch plates on Thursday and Friday.  We had finished with the pre-school children and moved on to the other older kids in another building.  I had stayed behind to watch them enjoy their lunch.  I’m not sure who was enjoying the moment more – me or them.  All of the sudden, one young boy in the back of the classroom was calling out to the teacher – it was in Creole and I couldn’t understand it, but he was pointing to the boy sitting next to him.  The young boy had gone to the bathroom while we were distributing the lunches.  When he came back he sat quietly, there was no whining, no calling attention to his situation, he had missed out and he assumed he would have to go without any lunch.  His neighbor, the little boy calling out, was the one who was upset and let the teacher know that this was not okay.  The teacher understood and directed me to go and get a plate of rice for the lad.  When I came back to the room his classmates had given him one of their plates and had begun to scrape the food off of their plates onto his so that he might not go hungry.

In the prophet Isaiah’s vision of the Peaceful Kingdom that is yet to come, Isaiah reminds us that it is a child who will lead us and show us the way.  You and I commit our lives to following this child, our faith rests in this Christ child.  In his living and perhaps even more so in his dying, Jesus has shown us in word and deed – again and again and again what it means to scrap from our own plates of abundance so that our neighbor, both here at home and far away will not go hungry.  You and I are blessed.  No doubt. We are blessed to be that blessing to another. For that, we give thanks.