Before arriving in Haiti, the Central College team were able to raise enough money to distribute 31 goats to families in Haiti. Today they were able to deliver some of these goats, while seeing how God’s love breaks physical and spiritual chains.

Catch up on their previous day here.

Today was a very powerful and uplifting day to see God’s love at work. The people we encountered today were noticeably touched by us spreading God’s glory and many of us were touched as well. This morning we did another round of food distributions to five families. We brought oil, bouillon, rice, beans, and spaghetti. We explained that the gifts we were giving were not from us, but from God… As he is our ultimate provider. These food distributions were very touching and filled both our hearts as well as the families we served. We got an overview of their testimonies and from all five families we noticed a theme of God’s healing powers and restoration of freedom. 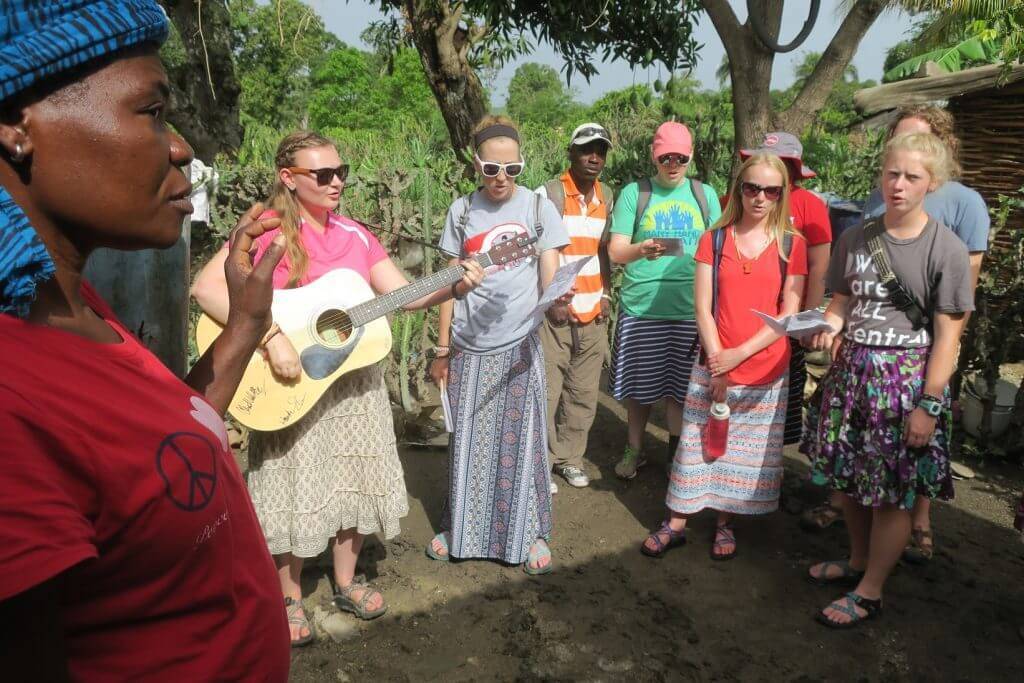 The team singing at Kerwen and Kerven’s house

Immediately, when we got to one of our food distribution sites, many of us felt confused and felt a sense that this woman, Anglen, had an immense story of how God revealed himself to her. It took her awhile to open up, and at first we did not think she was going to share her story. However, she then started sharing how she had a baby with twins on the way. Three days after giving birth to the twins, she was pronounced dead by the doctors at the hospital. Her family and friends believed this, mourned her loss, and buried her. Yet, two years later she reappeared at her family’s home. At that time, her family then believed that she was cast under a spell of a witch-doctor which made her into a zombie for those two years. We do not know what happened to her within those two years, but we do know that she was in Port-au-Prince. It was evident that she was and still is troubled and shaken. Since she has gotten back, she has been living with family members.

Anglen and Christi in prayer

After we learned about her story, we then asked if we could sing her a song in Creole. The song just so happened to be “No Longer Slaves,” which must have resonated with her because she started to weep as we sang. The song talks about breaking chains and bringing freedom through our Savior Jesus Christ and no longer being slaves to whatever darkness is in our past. She wanted us to lay our hands on her and pray. We did just that and asked Jesus to set her free and bring truth back into her life. We learned that in times of darkness, if we are believers in Christ our light will shine through no matter what the circumstance is. We all left in awe of how amazing God works through his children.

The team with Anglen and her family

After food distributions, we made it back just in time to serve food for the Thrive kids and their moms. It was fun to share God’s love with them through conversation, laughter, and playfulness. We were not able to be there long, but the amount of time we were there made our hearts full.

In the afternoon, we distributed nine goats (nef kabrit yo) to some of the Thrive families. We decided to name the goats: Mine (Claire) was called Felicia and Katelyn’s was Gingy! 🙂 Our team raised enough money for 31 goats which is wonderful, but 31 goats is not possible to deliver in two days. As a result, teams after us will be able to deliver goats as well.

We learned that goats are important for families because the family benefits in many ways. Each of the goats we delivered were pregnant females, allowing for their offspring to be given to another family in need. Goats are a way to provide meals for the family as well as an investment that allows the family to trade the goat in for a pig and eventually a larger animal such as a cow.

Delivering a goat to Juselin’s family

We gathered the nine goats and walked to the families homes. As we were walking, children would come running to us and would help us on our journey to deliver the rest of the goats. It was very uplifting to see the faces of the family members receiving the goats. It was evident that they were very appreciative of our presence and the gifts God provided us to share with them.

Today was a wonderful day, overwhelmed with God’s love and a sense of His presence. We feel blessed to have shared today with the Haitians and to have wonderful memories that we will cherish forever.

Love to all,
-Claire Rettig and Katelyn Kime