After a hard-fought battle against cancer, three year old Chalissa Jacques passed away on Sunday morning in Pignon.

The last photo taken at the hospital, after Chalissa’s third round of chemo.

When I heard the news on Saturday that Chalissa’s health was failing, my mind immediately went back to a couple weeks ago, when I saw her at her house in Pignon. She looked surprisingly well, as she walked back and forth between Christi and the others. My hands touched her smooth, bald head, the results of the chemotherapy treatments she had been through. My eyes glanced at her scarred eye, a ghastly reminder of the tumor that invaded her eye socket. This little girl had been through a lot in her three short years on earth.

This was what Chalissa looked like the first time we met her at the community movie night. 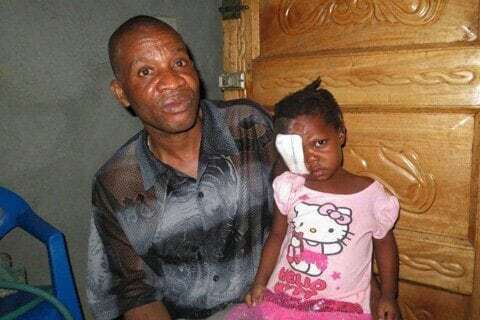 Taken two weeks after we first met her, she had surgery to remove the cancerous eye.

First, she had endured being given away by her parents, who didn’t feel they had the means to take care of her. I will never understand this, but I can’t judge. I have not walked in their shoes. Then, she endured her vision being stolen from her in one eye, as a tumor manifested and forced her eye to protrude out of her head. Next, she went to a hospital to get her eye looked at, only to be turned away because her adoptive father wouldn’t, maybe couldn’t, pay for the CT scan. She was left to die at that point. Then, we found her during a community movie night, as she showed up to watch a movie with the other kids. Only she wasn’t like the others; her eye was literally coming out of her eye socket. That is when we jumped into her story, getting her the medical attention she needed and paying for what needed to be done. Her eye was removed and things looked promising, but that was short lived. Within a few months, the cancer came back with a vengeance, forming a massive growth in the eye socket and surrounding areas. The pain was incredible, as she couldn’t eat or sleep and she needed help. After many phone calls and emails, we found a hospital in Port-au-Prince that would accept her and start chemo treatment, followed by radiation, if all went well. After three rounds of chemo, Chalissa’s little body could not take anymore and we had to stop treatment. She fought for another month before finally succumbing to the terrible disease.

When Chalissa came to us in June, the growth was back. She was in incredible pain. Taken at the hospital in Port-au-Prince, as we were able to start her on chemo treatments right away.

As I’ve reflected on her death, thoughts that I can’t shake are on replay. This is the second child under five years old that we have buried this year. I know part of it is a reflection of the breadth and reach of our help, as people now seek us out in situations like this. But, the other startling reality is this is way too common of an occurrence in places like Haiti. This is not right, nor how things are supposed to be. It is not beyond me to realize that Chalissa died on world orphan day, when technically she isn’t an orphan because her parents are alive, but she very much was an orphan in reality. There were very few people in the world that were fighting and protecting her. Yet, where is the narrative about this child and the millions like her across the world? I’ve seen and read all kinds of talk around Starbucks and whether they will write ‘Merry Christmas’ on their cups versus serving a plain red cup for the Christmas season. As followers of Christ, aren’t we fighting the wrong battle? Shouldn’t a defenseless child’s life be more important than what someone will or will not write on the side of a $5 coffee? I don’t think it is that people don’t care, I just think they are distracted and their sense of justice is off. Most haven’t seen or walked in these realities, so they don’t know what they don’t know. I am extremely grateful for all those who pour time, energy, and resources to our programs like Thrive for 5 and our school sponsorship 180 for Haiti program. No doubt, we have saved lives through these programs.

One final thought. A comment stuck with me from Christi Gabhart, one of our long-term staff in Haiti. She and her husband, Craig, have been walking with Chalissa from the beginning, as they were present when Chalissa showed up at the movie night. The last time we saw her, Christi commented how far Chalissa has come in letting them hold her. She was very scared of them initially. When I was there, Chalissa ran up and sat on Christi’s lap for some time, which Christi commented, “This never would have happened earlier this year.” 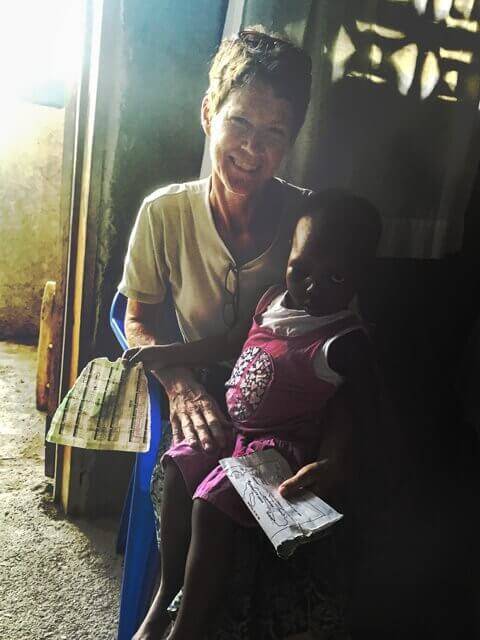 Taken October 19, 2015, in Chalissa’s home. She is being held by Christi Gabhart.

Many times as Americans working in a Third World culture, we become jaded because there are times when people want to be our friend because of our resources available. It can be difficult to discern the motivation for the act toward us. But, in this situation, Chalissa was too young to understand about resources. She didn’t learn to sit on our laps or show affection because of the financial help we were giving. She sat on our laps because of the love she received from us. She saw us many times over the past year and when she did, she experienced love from us. And love is greater than fear. We helped this little girl, and her family, understand what love looks like.

As I was singing “Hosanna in the Highest” yesterday in church, I was graciously given a glimpse of Chalissa from our heavenly Father. I saw a little girl, with a head full of hair and a beautiful, unscarred face, dancing and singing “Hosanna in the Highest!” No more pain. No more sorrows. I also had an enormous inner peace come over me with a still, small voice say, “You did what I asked. You can let go now. It is well.”

God, I thank you for allowing us to enter into the pain of the world and bringing your love where you ask. I pray for the millions of orphans, both physically and emotionally, who are in need of a Father. May we continue to be your hands and feet to show your love in the flesh to this broken world. Be with those who walked with Chalissa, the family members left behind, the caretakers, and those that have been praying for her. Give them the same peace you so graciously gave me. We rejoice for the life of Chalissa Jacque. May her death birth a holy discontent inside of people to take action for the voiceless. We trust in your purposes, and we trust in your plan. In Jesus’ name we pray. Amen.