Christ in His most distressing disguise 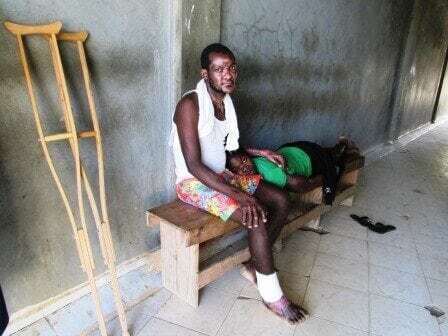 What do you do when you see God in His “most distressing disguise” as Mother Teresa used to say? And what if you have no idea how to handle it, as the situation overwhelms you, leaving a feeling of helplessness and guilt, because you’ve never walked in any shoes like the ones you are talking with?

That was me, two weeks ago.

While in Haiti in late January, the group I was leading from Liberty E-Free Church in Pella decided to go to the local hospital and pray with patients. After the bumpy ride into town in the back of the Toyota Helix, we arrived at the hospital. Immediately, everyone realized “we aren’t in Kansas anymore,” as the hospital isn’t like many most have seen before. People lined the halls in beds, families slept on the floor with their loved ones, and the foul smell of sickness filled the rooms. Lighting was adequate, but cleanliness wouldn’t be up to U.S. standards. And like most things in Haiti, it was crowded. In one room, there’s a mother who just gave birth to a child right next to a motorcycle accident victim who lost his ear and whose leg was in a splint. Needless to say, his garments were pretty bloody, and he wasn’t looking so good.

As is the standard in most hospitals, the worse cases are usually the farthest from the door. As a small group, we made our way back to the lonely room, farthest from the entry door. I was immediately shocked at what I saw, as a 30-ish year old woman looked up at me, lying completely naked on her stomach, with raw flesh burns covering most of her legs, back, and up her front.

Burns are tough to deal with, even when small, and to see someone with so many burns that she basically has to lie naked – it is an image that is difficult to forget. Catty-corner to her was a man a bit older, sitting in only his boxers and a white tank top, with visible burns on his hands, face, chest, and major burns around his ankle.

After a quick prayer for Christ to lead me on this one, I found out these two, Carolyn and Wilfred, are husband and wife. On December 27, they had a house fire and lost everything. They lived in a stick and mud hut, and it burned to the ground quickly, consuming their clothes, their items to sell for business, and all their other earthly possessions. Carolyn then started to tell me her biggest concern; she had a four month old that was badly burned in the fire, (she said the baby was in the baby ward next door) and with her weakened physical condition, she was not going to be able to breastfeed anymore.  She wasn’t sure how she was going to feed her family.

As is the case for most in Haiti, they had no bank account to rely on, no house insurance, no health insurance, and no 401(K) to draw from. There were no government programs to help get them back on their feet. They knew they were racking up quite a hospital bill and had no idea how they were going to pay that off either. Immediately, I put myself in their shoes, and then quickly realized, I had no idea what life was like for them. I’ve never been in a position even close to this in the past. It was an incredibly humbling thought, especially for a privileged, white American who previously had chased hard after the “American Dream”.

As a group, we prayed for Carolyn and Wilfred and asked God to lead us on what He was calling us to do. We asked who the pastor of their local church was, as it was a place to start in seeking help for this family. As we walked out, I noticed the grandma was following us out the door. She had been listening to our conversation and obviously wanted to talk with us. She grabbed my arm and through one of our leaders, Woody, she told me some additional devastating news. This morning, the four month old baby, Wilfredson, had died, and they had already buried him. However, she didn’t have the courage to tell Carolyn or Wilfred yet, as they were already so weak, and she feared for them physically and mentally. My spirits sank, and I was left crushed, thinking over and over, “God, what am I supposed to do with this? This is more than I can bear…”

As I slept that night and the nights to come, the image of this family had been seared into my memory. I couldn’t shake it. I was burdened for this family, as I couldn’t imagine what was going through their heads. They lost EVERYTHING – their health, their home, their family, their worldly possessions, their business, and I had assumed their faith. Thankfully, I was wrong on the last bit.

A few days later, I went back to visit them, this time with another group from Spencer, Iowa. As I walked in, to my surprise, Carolyn was reading her Bible. She again was partially clothed, lying in a bed right next to an open window. I could literally see the mosquitoes buzzing around her head, and I looked down at her bed to find ants in it. This time as well, I could see the depth of her burns in her private regions on her upper legs. She didn’t have a catheter, and I could only imagine the burn she must have experienced every time she went to the bathroom. Not to mention, she had been this way for going on a month now. Yet, there she was reading her Bible.

As a group, we started to sing some of our traditional worship songs. She picked up what we were singing and started to sing with us in Creole. As I stood next to her bed, I was in the presence of God, as this poor, broken woman, who had lost everything, was worshiping our God from the depths of her toes. I was among royalty in God’s Kingdom.  Pretty soon, her older two children came around to view what was going on. I noticed burns on them as well, but not nearly as severe as those on their parents. After a time of singing and prayer, I bent down and kissed Carolyn on the cheek and let her know God’s people were going to help her.

After more singing and praying, our group made our way upstairs to our quarters and the burden for this family was evident. We started discussing how we could enter into this pain in a God-honoring way, with the hope of restoration for this family. We wanted to engage the community and have them be part of the solution, as it isn’t good for white Americans to just swoop in and make problems like this go away.

After some discussion, we decided we would talk to the local pastor and through the church, rebuild the home. We would provide the rock, sand, cement, tin, and wood for the home, but the local church body would be the ones to actually rebuild the home. We would also talk with the hospital to see what we could do to help wipe out their bill, as there was no way they would be able to pay. We would explore options to provide health insurance for them in the future, as we knew they would need additional care and check-ups. And we needed some food to get them back on their feet.

On January 29, Carolyn and Wilfred were released from the hospital – probably prematurely, but released nonetheless. We took them to their cousins to live, as that would be their temporary place until we could rebuild their home. We talked with the hospital and discovered that their bill was $1,140 U.S. or the equivalent to three years’ salary for most in Haiti. The hospital had done their research on this as well and determined this family had nothing, so they forgave the debt for their services. Praise the Lord. (If you want to give to Promise for Haiti to cover medical needs such as these, click here.)

We then had conversations with Pastor Alfred, their pastor, and they were on board with helping rebuild Carolyn and Wilfred’s home. The Spencer team had some extra money to give towards their home. Combined with the MH4H “Give Joy” Christmas gifts to rebuild needed homes, the money was already in place to help. Praise the Lord again!

During these conversations, a couple different members of our group felt a call to purchase health insurance for this family, through the Five Loaves program. (Click here for more details on this program.) Now this family would be able to go to the hospital without having to worry about how to pay for it. And lastly, the Spencer group had taken a major collection before they left to distribute beans and rice to families in need. There were more than enough funds to purchase this family enough beans and rice to get them on their feet. Praise God once again! We know Carolyn and Wilfred have a difficult road ahead of them, but I think they also know we will be there with them to help as God leads.

So back to me, two weeks ago, standing in front of Jesus in His most distressing disguise, feeling helpless, overwhelmed, and incredibly small in the situation. I’ve realized that Jesus didn’t ask me to have all the answers or to come up with some elaborate plan. The plan was simple – be available for Christ to use me how He wants, trust in Him in all His way, enter in to loving God’s people as Christ loved us, and when God asks you to do something, do it without delay. We, at MH4H, understand that walking with this family won’t change the whole country. And we have to be okay with that, as that burden lies with God and God alone. Our hope is that God uses us as He sees fit and that through our actions, we lead others to the more difficult, steeper climb that God requires of His followers. Because if we all follow this more difficult, steeper climb for Christ, He will make Thy Kingdom come, Thy will be done, on Earth as it is in Heaven.