Class resumed at Sewing Hope on January 21 with a new group of ten women desiring to learn how to sew. The women were selected by a Haitian association for the community based on aptitude, previous volunteerism in the community, recommendations from others, and anticipated ability to finish the course. 140 women from the community remain on the waiting list to get into the program.

The first group of ten women graduated from the program on November 24, 2013. Now that they’ve graduated, they’re responsible for sewing 100 t-shirt diapers (learn more about Bundled Bottoms here) as a form of repayment for the program. After they’ve sewn 100 diapers, they can earn a wage for additional diapers sewn. All of the graduates have access to the sewing machines at the center during the morning to sew whatever items they wish. This may include their quota of diapers, but they can also sew other items they learned how to make that are suitable for trade and sale in the market.

Meet our ten new students and check out what they think about this program below: 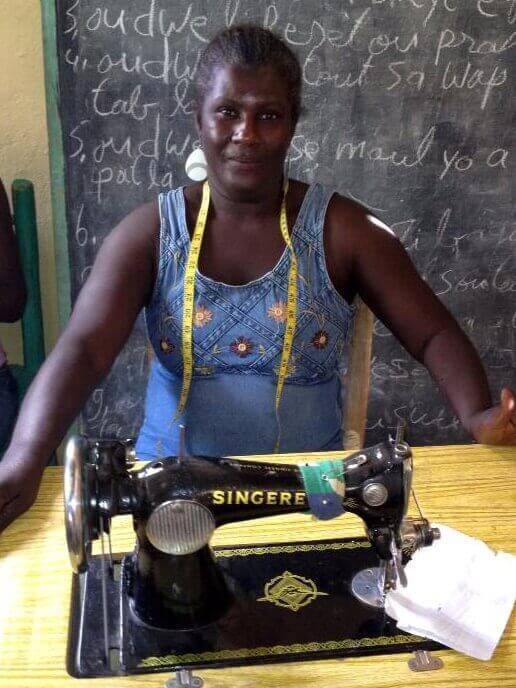 “I wanted to join Sewing Hope because I saw the progress of the other graduates and that motivated me to join.” After her time at Sewing Hope, Joselie hopes to be able to sew dresses, shirts, uniforms, and diapers.

Louis joined Sewing Hope because she wants to learn how to make bracelets, and she “wants to have more knowledge about God and how to love one another. She says, “Sewing Hope will change my future because I can make things for people that I can sell and make money.”

Since Yvenie was a little girl, she wanted to learn how to sew. “It is a privilege to be able to learn how to sew; many thanks to MH4H for this opportunity!” She said since she doesn’t have money to buy fabric or to pay someone to sew for her, she can now save money and make her family’s clothes herself. Yvenie wants to learn how to make jeans, and she’s also hoping to learn more about how to cook.

Wilmene is excited that she was accepted into the second class at Sewing Hope. She knows this program will help her provide for her family better.

When Gulnie saw the progress from the last group of women in Sewing Hope, she knew she wanted in. She said she “loved seeing all of the lovely things that they made” and looks forward to learning for herself. She hopes to be able to sew and cook for all people (Americans, Haitians, and Dominicans) so she can throw big parties.

“Sewing Hope will change my future because I can sew for others, make money, and provide for my family.” Jean says that people should continue supporting Sewing Hope so that more women like her can learn how to sew.

Emase appears to be a romantic, as she really wants to learn how to make cake and wedding dresses. She hopes to see more women continue to enroll in Sewing Hope: “I want more women to enroll so that they can learn how to sew and cook, and then be able to buy food for their families and send their kids to school.”

Nacielia hopes her time in Sewing Hope will help her better her family’s future. She thinks people should continue to support the program so that “more people can learn how to sew.”

Youseline says, “Sewing Hope will change my future because I will be able to sell items and make money.” She’s looking forward to being able to help others with her new skills and abilities.