Today, we woke up early, again… Well not that early, about 6:30. We are still embracing the grunge! I shower little, my face is covered in dirt, my armpits could be mistaken for a skunk, and I am loving every second of it! When we woke up, we had to hurry and get ready for breakfast because at 7:00 we were going to be on our way to the Pella Christian school here in Haiti.

On the way to the school, the air makes me feel free. Because it is illegal to ride in the back of a truck in Pella, I felt like quite the “bad boy” when I was bouncing along the dusty, rocky trail called a road. When we got to the school they were just finishing up their pledge of allegiance to the flag of Haiti. They all then marched back into their classrooms to patiently wait for all of us to enter their place of learning. Each one of us had given crowns and tiaras to the boys and girls that were at the school. Most of them had a blank stare on their faces, which was both awkward and hilarious alike. Once they all received their own piece of royalty, they were taken outside to learn about how Moses was born and how since the Israelites loved God so much, He protected them and saved them from the Egyptians. I even got to crack a whip really loud for the kids, and I scared myself!

After we got done with the story, all chaos broke loose. The children were given soccer balls, jump ropes, hoola-hoops, and even a large parachute that everyone loved. And if you think there is nothing to do in Pella, myself and 5 Haitians found a marble, and started to play soccer in a room with it. At the end of the trip to the school, we all gathered in front of the big Pella Christian sign painted on the wall of the school. It was very sad to leave the kids, but I definitely enjoyed seeing the smiles on the faces of the children.

In between the school and our next visit, I learned a new game that I can’t wait to bring home to show my friends. It’s called Tic Tac, similar to Tic Tac toe, where you have to get three in a row. The game is difficult to explain but it is extremely fun and I can’t wait to beat my friends in it.

The next place we went was to a church that was simply a building with cement walls. When we got there, we shared our story again. Afterwards we went outside and played the same games, thought this time several of us broke out the bubbles! At first all was going well when we were blowing them, but then the kids would pop the bubbles before we could even blow them! After that I got to hold a little baby boy that really didn’t want me to hold him. I think I had scared him a little, because he would not stop crying. Around lunchtime, the kids received Cheetos and juice pouches. A fellow team member, Christa, and I fed a baby girl some food to eat and juice to drink.  We didn’t know her name, so we both decided to call her Brinly, which means princess. Once again, it was very difficult leaving the children,  though it was very nice to see all the kids smiling such big smiles.

Before we came back to the compound, we stopped at a very rickety bridge, much like the one on the movie Shrek. I didn’t enjoy it too much because it was high up and it was not very safe, but I am still alive to tell you about it, so all is good.

The last thing I want to finish up on is the food here is amazing, so much of it, and so new to me. I could possibly live off of the rice and beans of our cooks.

I love it here and wish I could stay for a month, but I am looking forward to coming home and I hope that someday I can come back and bring my family to Pignon, Haiti with me.

Written by: Katelyn Kime
Today we had another busy day. We left around 7:15 this morning. We went to the Pella Christian School in Savanette, which is a town not too far from Pignon. It was a very bumpy long truck ride but we’re entertained by singing our hearts out the whole way there. When we arrived at Pella Christian the kids were all lined up as to what grades they were in. There were so many kids and they all were so cute. We handed out foam crowns for the boys and tiaras for the girls to keep. They loved them and the joy in their faces was priceless to see. We then performed a skit, the Story of Moses and the kids had fun watching us. It was cool to see them understand the story, as Woody, one of the Haitian MH4H workers, translate for them. After the story we sang a few songs and had different activities the kids could chose to do. Some played with a giant parachute, others played soccer, and the girls loved getting their nails done. When it came time to leave, it was hard saying goodbye, especially when you have children grasping your hands because they want you to say.

After Pella Christian we went to a church in Silvan, which is another town outside of Pingon. There we did a Bible School for the children. We performed the same skit as we did for the Pella Christian kids, sang songs, and played with them there as well.

We had all ages at this bible school. Today I definitely felt there was a theme going on, as we encountered many babies and young children that either had a disability or was sick. By just looking at some of the little ones, you could tell something wasn’t quite right. It was an overwhelming feeling to see how hopeless they were. Before leaving for Silvan there was a mom with a really tiny baby standing by the compound. I got to hold this little baby who seemed only a few months old. I realized something was wrong her. She couldn’t move her legs or open her arms at all. I also noticed she had no saliva and she acted like she was crying but no tears were appearing, which made me realize she was severely dehydrated. We talked with the mom and provided formula and gave her a bottle, because she didn’t have any of that. It broke my heart to see such a sick little baby. We were able to feed her a little bit of milk, which she drank right away. We found out where that family lives, so each day we are here, we are going to go check up on her and see how she’s doing. 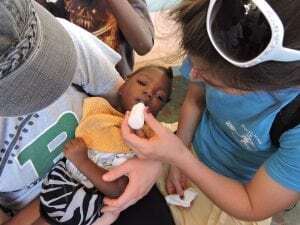 The last thing we did for the night was going to a witch doctors home and praying with them. When we got there the witch doctor wasn’t home but two ladies were. One was cooking food and the other one was sleeping. We sang songs and prayed. Eventually the sleeping lady woke up and we prayed for her. She came to the witch doctor in November, and is still there. This was a very hard thing to do, but when we left, everyone of us knew we did the right thing by praying over the lady there for treatment, as well as the witch doctor, even though he wasn’t there.