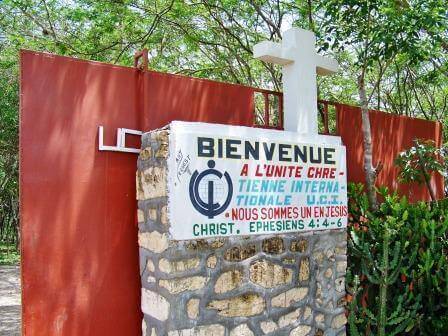 We woke up a bit earlier than usual knowing that Beatrice would be coming to get us for a trip to the big market. It seemed to be even more crowded than the week before, but then we realized that with New Year’s Eve and Haiti’s Independence Day approaching, people would probably be preparing a bit more than usual. We followed Beatrice through the streets and between the crowds, always careful to keep an eye out for her bright red dress. We must seem like ducklings the way we turn and follow her every move. As Josh wrote before, the money here is incredibly old, and it can be difficult to find someone with the right change. This means we will visit multiple vendors, only to return to the first one again with the amount necessary. Beatrice and the other ladies were incredibly amused when we asked what “sheesh” meant, as we kept hearing it over and over. Fransly informed us that it means stingy, and Beatrice was quick to tell us that she was not the stingy one in these particular negotiations.

As we wound our way through all the crowds, I couldn’t help but notice the ever-increasing number of people, buyers and vendors alike. At one point a truck was making its way through the bustling market, and had to creep along as it came with in centimeters of the sweet bananas that lined the street. At one point, an overladen donkey nearly sent me toppling over into someone’s goods, and a motorcycle making its way forced us to inch as close as possible with the people next to us so as not to catch any toes or get burnt by the hot engine. I’m glad the big market is only here once a week, as I don’t think I could handle the crowds and chaos on a daily basis. It’s like the Haitian equivalent of Black Friday. People surge together in the same direction, and it can be a struggle to work your way against the flow of the crowd. At one point a young woman wanted to sell us some small coolers/thermoses. When I responded to her in kreyòl by saying no thank you, that I didn’t need any, she couldn’t help but giggle and smile back in response. We needed to wait for Beatrice before we moved on, but the young woman was sure to smile and wave at us once we continued on our way. Later on towards the end of our shopping, two small girls who were playing in front of an elevated porch caught our attention with cries of “Blan! Blan!” One was dressed in a bright yellow swimsuit, and the other a bright pink dress. As we waited again for Beatrice to find just what she was looking for, for just the right price, the girls danced and giggled and waved. They were definitely hamming it up and enjoying the attention they got from us. They would laugh so hard and fall over one another, and then just keep rolling on the ground laughing. It was wonderful to see two small friends so happy together.

We had planned to go to meet Pastor John John and his wife Christi. We’d heard of them regularly during our stay here, but they had only recently flown back to Haiti. However, some other projects came up in the afternoon, and we postponed our trip to their land for another day. In the end, I think this worked out for the best, as we were still recovering from all the eventfulness of VBS and having gotten up early for the market. It was nice to spend the afternoon relaxing, enjoying the wonderful weather, and getting to know our new neighbor Alphonse who is here to help with the planning and construction of the hospitals maternity ward. As our time is winding down, we hope to make some visits to the different leaders we’ve met here in the community such as Jean-Robert and Bill & Jennifer. It definitely hasn’t set in yet that it’s almost time to go home!

So this morning we decided to go to church with Zeke and Bebe. He picked us up around 10:40 and we headed over to his church. As we walked in the first thing we noticed was how large this church was compared to Fransly’s. There were about 250 people at the service, compared to about 90 at the service we went to last week. We went and stood in the pew, as the congregation was singing hymns in Kreyòl. We then sat down as a children’s choir of about 50 timoun began to sing. It’s always nice and beautiful to hear the voices of small children singing the praises of our Lord, no matter what language it is. A little while after the children sang, the Pastor came to the pulpit. He gave a lively message that for lack of a better reference we can only compare to the Southern Baptist services we had been to. From what little Kreyòl we had gathered during our trip here, and Zeke explaining to us at the end of the service, he was saying that we should fix our vision on Christ and that he is the same God yesterday as he is today and will be tomorrow. It was a powerful message and I believe a fitting one for the coming New Year. We should all have our compasses pointed towards Christ in 2013, so that we can perform in all aspects of life to the best of our abilities for him. It was nice to be able to go to church with Zeke and Fransly during our time here. It’s also reassuring that no matter where we go in the world in the future that Christians are singing the praise of the Lord all around the globe.

After church we hopped in the truck to go to Pastor John John’s compound.  We were both excited to meet the man who everyone kept on asking us if we knew him. They would ask “you know Pastor John John right?” We in turn would reply to them no we didn’t. They would seem baffled and convinced we did in which they would say, “Yes Pastor John John and his American wife, Christy.” To which we again had to reply to their astonishment we didn’t know them. When we got there they were finishing giving out some of the Christmas packages to some of the local children. Pastor John John and Christi told us that this year churches in the states had provided enough gifts for 800 children! Pastor John John showed us around his complex, which was fairly impressive to say the least. They had a primary school with around 300 children. They also just recently started a college that currently has 89 students and they had just finished their general education requirements. There was a green house on the property in which they grow coffee. Deforestation is a major concern in Haiti and is largely unregulated the Pastor told me, and they were trying to replant coffee to show other Haitian how much more profitable it can be than cutting down trees. After playing some soccer with the local kids, we decided it was time to head back to the house. Pastor John John and Christy invited us to come spend New Year’s Day with them and we gladly took them up on the offer. It will be nice again to speak to them and see them before we leave.

I’m amazed at all the people we have met so far doing such great good for Christ on our Journey here. Obviously, there are all the people that work for MH4H. There are also Dr. Guy and the hospital staff trying to heal the people of this town and give them the best medical treatment possible. Bill and Jennifer Campbell running the orphanage and helping  children and mother’s with the feeding clinics. The Gibson family on their yearlong journey to put the word into practice across the World. Jean Robert on his mission to help people who need it most in his hometown. And finally Pastor John John and his wife using a multifaceted approach to better the country and the people here. It’s an encouragement to the both of us that there are like minded people in Christ in this world and we will continue to pray for all of them in their endeavors from now on.