Bonjour from this place of ‘contrast’,
God was working here with us and on us each moment of each day.  The days were characterized by original plans being flipped to something different on a moments notice.  God was at work.  I felt over and over God saying, “your plan would be good but MY plan is perfect, FOLLOW ME.”  And the team DID just that and God’s plans are perfect.  The course of each day felt so complete that any one day seemed like a week. But then at the end of the week it felt like only a day had passed since we arrived in Haiti last Thursday.
In this place of such extreme poverty and disease the contrasted BEAUTY of the people and the land cannot be described in words.  The story a man and a woman trying to survive after a recent house fire that burned everything they owned was unbearable. But amazing things can come of such a situation. A cement block house was built in the same place where the house had burned. Our team had the privilege of putting the roof on that house, securing the house with 2 wooden doors contructed by some on our team, and moving the furnishings into the house on Thursday. The furniture turned out to be a bunk bed frame that was taken from an unused dorm here on the grounds where we are staying. In the interim, before the house was ready, the bunk bed has served as a temporary shelter.  After the doors were hung and the bed brought in, the man and his smile transformed the story from unbearable to seeing the Glory of God shine!  As a new home owner with a secure place to live, the man must have felt like a king himself!
Five team members remain in Pignon for one more week to continue serving God in this place of contrast.  We hope God continues to change our plans and show us the way to FOLLOW Him.

Christi and the team

This was a picture of the “house” the older couple was living in the beginning of January. We decided then we would look at a way to help this couple. A fire broke out in the above home, leaving the couple with nothing. When we visited them in mid-January, this is what they were sleeping in. With the lead of Zeke, Jean-Robert, and Dean & Paula Van Roekel, quickly a makeshift “shelter” was built to get them off the ground and protect them from the elements. 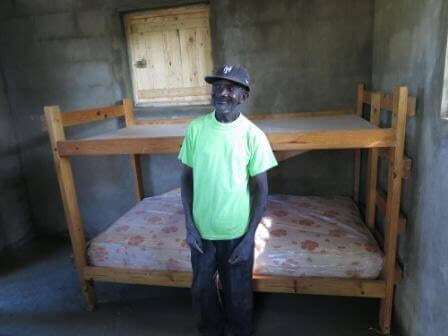 Now, a home with a cement floor, cement walls, roof, and some basic furniture is built for the couple. We had the community surrounding them help, with people bringing various supplies. The couple, and the community, is so thankful.

Standing outside the finished home. What a joy to be the hands and feet of Christ!