This is written by David Samson, a member of the ISU trip of 6. He is serving in Gonaives, Haiti this week. This is his second time in Haiti and first time serving with MH4H. 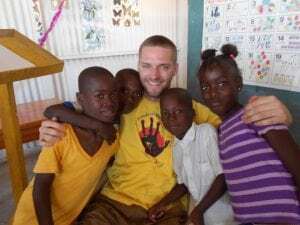 Dave Samson and the kids of Etoile.

On the final full day doing mission work in Haiti, we got another early start so we could watch the kids do their opening ceremony for school. The kids stood in lines according to which grade they’re in and then they proceeded to sing Haiti’s national anthem. During the national anthem they raised the Haitian flag. Click here to watch video of opening ceremonies.

Afterwards, we followed them to their classrooms to observe an average Haitian school day. Then after lunch we handed out the pillow case dresses and flip flops, which the kids loved. After the kids were sent home for the day, we headed back to the house to get a quick snack before heading back to the school to talk to the

One of the young ladies sewing in Illene’s Sewing Program.

After that we went to the orphanage that we stopped at on the first day. We played with the kids there for about half hour before deciding to take a tour of the poorer part in Gonaives.

Standing outside of (3) of the student’s house of Etoile. The house is the little house on the right.

We got to see a bunch of the kids that attend to Etoile School. We saw a bunch of mud huts and the Gonaives landfill; a bunch of piles of trash for as far as the eye could see. After the three mile walk, we ended up at another mission school. We got a quick tour of the school and then we had to head back. While we were walking we kept picking up kids along the way. By the time we got back to our school, we had at least 30 young kids with us. Once we returned, we headed back to the house so we could get cleaned up before we went out to eat. We decided to get pizza for our last Haitian meal. Tomorrow morning, we’ll watch the school children start school again and then we’ll leave for a day at the beach. Until then we’ll finish packing and spend our last night star gazing from the roof of our house. See you all soon!