Forget Mexico; this is true paradise

We started off today by getting up around 6:30 to get ready for breakfast and a busy day. After eating a great breakfast, we went to the Pella Christian School. All of the kids were so excited to see us. We brought the rainbow crafts that we put together last night into each classroom. The kids each got their own to color and came up with many creative ways to wear them like crowns and necklaces.

After the crafts were done, we brought all the kids outside. The whole group sang and danced with the kids. Then we did a Bible story about Noah and the ark. Each person on the team played some sort of role.

After the bible story, we brought each classroom de-worming medicine. It took a lot of time to have Zeke write directions on each box and open each lid. A nurse from Pignon and Bebe helped each kid take their medicine. The kids were all pretty willing to take the medicine. 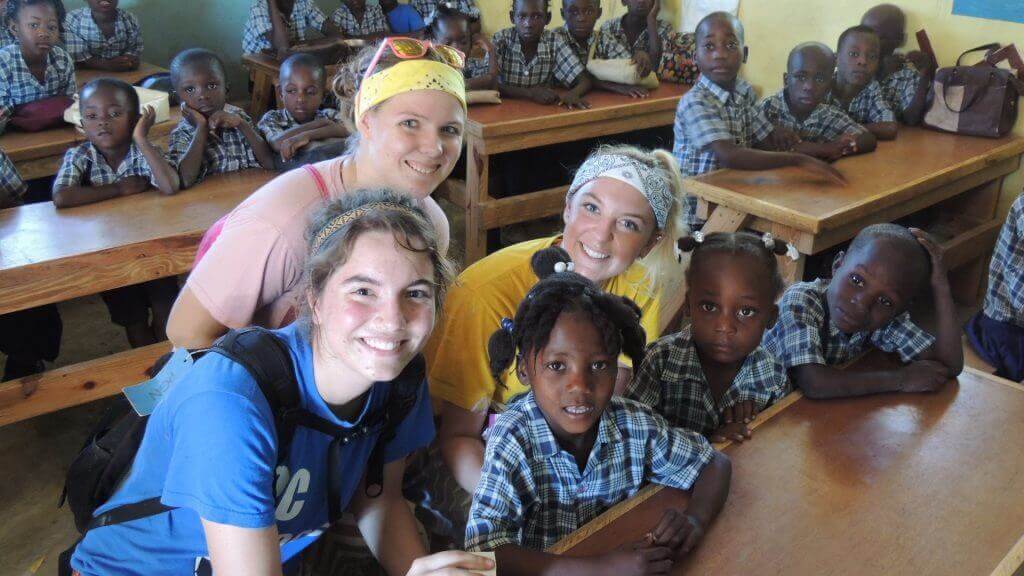 We administered de-worming medication to the children at Pella Chrsitian. The little girl pictured is Mr. Herdegen’s sponsored child.

Once the kids had gotten the medicine, we introduced them to hula-hoops. None of the kids had seen a hula-hoop before and were SO excited to see everyone using them. It was so funny to see their reactions and try to show them how to do it.

The kids LOVED trying to hula hoop! They had never seen such things before.

After we were done at the school, we had lunch and then spent time working around the compound. The girls painted the guardhouse and part of the depot, and the guys built a shade for the cooks and made a railing for the stairs to the roof. Everyone spent a lot of time in the sun, and we have a lot of nice tan lines forming!

When it was time to head back to the school for a movie, all of the kids got in the back of the three wheeled mini bus with Tim Van Maanen at the wheel. It was a highlight of the day for almost everyone. It was meant for way less people and super un-sturdy on the roads, but everyone watching was laughing as well as everyone in it! Zeke said we couldn’t take it to the school, so we turned around and got the other truck.

This is the three-wheeled mini bus that we took a spin around Savanette in.

When we arrived, we danced, sang, and did parachutes in the schoolyard. Then we watched Kung Fu Panda with all the kids and parents there. They loved it, especially the fighting parts! After the movie was over and there were a lot of sleeping kids, Lucia played videos she had made of past groups that have come down. The kids were SO excited to seem themselves on the video, and everyone would yell and scream when they recognized people. It was really cool to watch them see how much they have changed. We ended the night sharing our highs and lows with our team and singing.

Today was one of my favorite days I have ever experienced in Haiti. Since I’ve been a couple of times, I came down with a preconceived notion that it was going to be a lot like the previous trips I’ve experienced. I will admit, I came down a little disappointed I wasn’t going to Mexico or Florida like my fellow spring-breaking friends. However, now that I am here, I realize what God was trying to tell me.

I also have to admit that for the past year or so I’ve been really concerned with myself. Like how people view me, what I want, and what I think I deserve. I don’t feel guilty for feeling this way; it’s human. God, however, has been telling me differently.

During my Ash Wednesday service, I felt like God was telling me to help others, be less concerned with me, and become more concerned with everyone else. Naturally, I kept putting this thought off to the side, hoping that it would eventually go away so that I didn’t have to act on it. But like always, God doesn’t let us just push His messages away.

Michaela described the events of the day to you very well, so I’m going to focus on sharing what God is doing in my life. When we headed back out to the school this evening for a movie, we started off the night playing my mom’s iTunes and having a little dance party with all the kids.

Dance party at Pella Christian before showing the movie.

I’m amazed by the happiness a dance party can bring. Obviously, us white people get laughed at for our incredibly pathetic dance moves. As completely uncoordinated as I’m sure I looked, I loved seeing them laugh. One older man started dancing, so I danced towards him, and we started dancing together. The laughter from the kids and adults erupted. For me, that was probably one of the happiness moments of my life.

God speaks in amazing ways; I’m learning that we just have to be willing to listen and follow him. He is the one and only road to true happiness.

I was so concerned about not getting to go to Mexico, not being able to sit on the beach and drink fruity drinks. I was so concerned about ME. But that beach and those tasty, (super tasty) drinks wont ever bring me the happiness I felt from having 50 Haitians laughing uncontrollably at my dance moves. Though this may not be a five star hotel and there may not be umbrellas in my drink, this is true paradise.