“Rise and shine, and give God the glory”. That is what I text Rom-old on the 2nd day of the trip at 3:30 AM, which is NOT his favorite time of day. It seemed appropriate to include this, being that this morning, we got up at 4:30 to climb Mt. Pignon.

What have I seen? Haitians shining in a world of darkness, and in the midst of severe poverty. Whether that is a choice they have made because of Jesus’ presence in their life or a cultural normalcy, I do not know. But I do know that I have still seen the hands and feet of Christ displayed in full by every member of our service team. Our group leader Lucia, whom I compared to Mother Theresa, has especially displayed traits of compassion and evangelism as she comforts and ministers to those we encounter. The younger group members of our team have been shining lights for Christ as they continue to laugh and play with the Haitian children, and lay hands of prayer on the sick in the hospital.

We started out the day at 4:30 AM by hiking up Mt. Pignon. We made it up the mountain in less than an hour, making us the fastest group on record. On the way back down, we went a little faster, and Jory ended up falling and rolling down the path. I think almost everyone who saw it would tell you that the low point of their day was watching him fall helplessly. When we got back to the hospital, we had time for breakfast and a shower, and then it was off to the market.

To help you understand how hectic the market was, try and imagine  10,000 people contained in the perimeters of the parking lot of Bethel Mennonite Church. Now fill that space with vending tables. You might believe that staying together in a group of 20 would be an impossible feat.

To make this journey even more difficult, many children were clinging to the arms of our group members. While this does make it challenging to maneuver through the crowded market, it felt good when the children wanted to hold our hands. They didn’t want to let go, and this was confusing because of the lack of touch we have in our American society.

After the market adventure, some of the men went off to hang a chalkboard in the Sewing Center that we painted earlier this week. Those who didn’t go along, stayed back and relaxed, or playing some basketball with the locals. Later that evening, we went to the rural town of Savenette to show a movie to the locals. All in all, I can say with confidence that this day was the best of those I have experienced so far.

Coming to Haiti has been one of the best experiences that we have ever had.  The Haitians have managed to steal our hearts with their joy, despite their hardships.   Seeing the children’s smiles and extending their hands wherever we went yelling “blanc blanc” touched us deeply.  Today we had the privilege of getting to go to a Haitian church service.  When we arrived at the church it was fairly full, so the first two rows in the front emptied out and moved to the back for us.  We felt very humbled.  It was youth Sunday, and the children sang several songs, that brought tears to Ron’s eyes.  The presence of God was truly in that place.

Later in the day we went to check in on the sick baby that we had encountered early in the week and had taken to the hospital.  The doctors had said he had “thrush” a very treatable illness.  Here however, that is not the case, and this child may die, because the family does not have enough resources to help him.  When Ron took the food into the house he discovered that there were no windows in the house, the floor was dirt, and it smelled.  He was in the presence of real poverty.

This trip has as been surreal at times.  To this point we are seeing things that have been on TV or in magazines.  It is amazing how wasteful we Americans are.  When we were painting at the Rocky Mountain School, the children would come up and ask for the empty paint cans.  They would clean them out and use them to store food and other items in they needed to seal up.  To us, they are a pain, something else that needs to be pitched, but to them it is an item to be treasured.

Despite all the poverty there seems to be a big sense of community among the Haitians in Pignon.  They walk around and talk to each other, and the children run around playing games with their friends.  The children play soccer (football) in the streets with plastic bottles, and make their goals out of rocks.

Being in Haiti has really opened our eyes.  It really brings the bible verses of taking care of the poor to a whole new meaning.  Our experience here has made those verses more real, and gives us a sense of shame for what we have not done, but a determination to be God’s salt and light of the world.  Thank you for supporting us and making this trip possible.  You rock!

Climbing down the mountain. Market day! 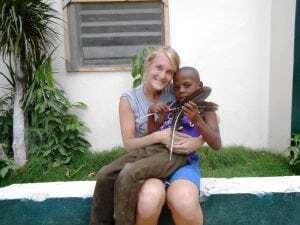