Blog written by Mr. Brett Schouten, B.A. (and future minister of Word and Sacrament) and Hunter Thorpe (student of religion, philosophy, law and other less interesting things). Both are part of the Central College campus ministry team.

Hey everyone! Today was our first day in Pignon, Haiti. As we arrived in Port au Prince, our initial surprise was how much hotter Haiti was than Iowa. When we left Des Moines, it was in the low 60s and in Haiti, we arrived to 90 degree weather. As soon as we got out of the airport, we were enveloped by a number of Haitians looking to make a few bucks from moving our luggage for us. Although we did not enlist any help, they were fairly persistent and ended up taking some of it. We were then taken to a van, a white mini van, in which we would spend the next five hours traveling to our dorm in Pignon. Even though the distance between the two may seem to be small, likely less than a hundred miles, it took 5 hours due to road conditions which included, a parade, a carnival, and angry cops marching down the street. Not only did we get stuck in this, we also soon found ourselves trapped in a thunder storm in the mountains.

All on the plane and ready to head to Haiti! 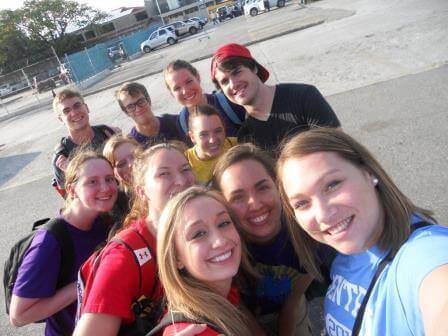 We arrived at Port au Prince. Time for a quick selfie.

This is our tour bus for the 5 hours ride up the mountain. And yes, we are stuck in mud.

After we made it through the misty mountains cold (in dungeons deep and caverns old), we arrived in Pignon where we settled in for the night and would soon begin our Haitian mission. Our first day in Pignon  began at 7:30 when we had breakfast as a group followed by prayer for a piece of land that was recently acquired. We then began to map out the surrounding village, where we spoke to locals and enjoy each others fellowship. After mapping the community out, we headed back to the dorms for lunch and a siesta as the heat of the Haitian day was tolling on our poor Iowan bodies. This afternoon, we spent time in the Pignon market, where we purchase cooking supplies. This experience was interesting due to our inability to directly communicate with the Haitian vendors. Luckily, we had a translator with us who helped us get good deals on the goods. We then returned to the dorm where we had a fantastic dinner which included some local dishes such as plantains, mango smoothies, rice and beans, and chicken. Following dinner, we went on hike to a local bridge that we crossed and certain leaders said that they were glad that certain students (us) had sign the liability waiver. That’s been our first day and for all that have been praying for our mission, we would like to say thank you. This trip has been a blessing so far and we hope that it will continue to be fruitful.

The bridge. That is us up on the suspension bridge, Indiana Jones style. Don’t worry, we all survived. Going to buy rice, bean, and oil from the market. The weekday market in Pignon. Rocking bracelet making, as we will be distributing these later this week.