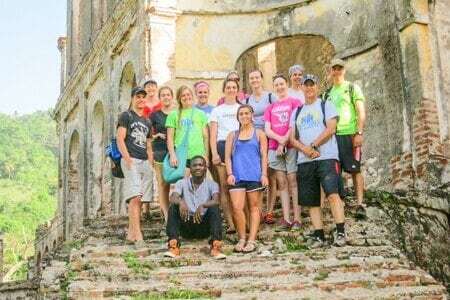 For most of us, our day began by waking up before 5:00 A.M. so we could head out to the Citadel. The trip was 25 miles in 3 hours. The truck was different from our normal truck we usually ride in. This truck had wood benches in the back and one on top of the cab. Our butts were saved by towels, but our backs cannot say the same. The metal bar keeping us on was not comfortable in the slightest. Every time we went over a bump our backs would slam into the bar. I can say that we will all have bruises in the morning. We stopped half way in Dondon for some fresh bananas; this was our breakfast for the day. They were so tiny compared to the ones back home. Along the way, the scenery changed completely from here in Pignon. The mountains and trees were so beautiful. To know that God had a hand in doing this is amazing. We even passed some waterfalls. The scenery made the ride so much more enjoyable even though it was bumpy the whole way through.

Our taptap brought us from Pignon, starting at 5:00 am

We finally arrived in Merlot, where the Citadel is located, and it is a completely different feel than Pignon. The main road was paved. Like an actual road with yellow and white lines. There was even a stop sign. As we past on the main road, we saw a police station with working police on duty. This proves that it is completely different from city to city. We arrived at the Citadel and the whole team was relieved that we could stand and move around. It was also great that right when we got off the truck there was a bathroom because let me tell you the bumpy roads for 3 hours really takes a toll on your bladder. We then started our journey. This was the easy part. We walked up and saw the Palace of Sans-Souci. The palace was built by Henry Christophe. Henry declared himself king after Northern Haiti’s Independence in 1804. The palace was beautiful even though most of it was gone.

We drove up to the second parking lot and then we had to walk. Let me tell you that this was a work out (maybe it was just me). The Citadel was located on a mountain and the path was steep and curvy. We finally made it to the top and by that time the legs were burning. But the view was great. You could see everything from the top. We got a tour of the Citadel and that itself was so unique. The story behind it all was a little frustrating. The king had 10,000 slaves build this Citadel because he was afraid that the French were going to attack again when in fact they never did. The slaves spent years building something they never really had to. If Henry was less concerned about being scared and more concerned about his community and country, he could have done a wonderful thing. We finally ended our tour and sat outside the Citadel on the steps and ate our lunch, Peanut butter (American) and jelly on the delicious Haitian bread.

The view around the Citadel

We then started our journey back down. This was much simpler than the way up. We almost had to run to keep up with our feet. We then spent the next three hours on the truck back to the dorms, but not before the truck broke down. The driver fixed the battery with a screw and copper wire. That was the amazing part. They find the most unique ways to fix things.  The sun was shining much more and I can say that I (Morgan) did not apply enough sunscreen. My legs are fried. We finally made it back and we were all tired. We just slowly sat down in the chairs and just about fell asleep. It was a fun filled day for all of us.

I (Cali) and Leslie Pence stayed behind today with plans of spending the afternoon at the Sewing Hope center in town. We got to sleep through the alarms of the rest of the team and have Craig’s amazing pancakes for breakfast. J We girls, Craig and Hank (another missionary living in the compound right now), in true Haitian style, took the motorcycles into town to run some errands, which included buying groceries for the compound meals from the market. In Haiti, the saying goes “There is always room for one more!” So Hank took Leslie and I on the two person motorcycle to see the land where he is doing most of his work during his month here. We hiked through the school, church, dorm and farm areas while Hank talked about the vision and progress of the acreage. It was really exciting and inspiring to see the work God has done and can continue to do through this land and the people who work on it.

After lunch back home at the compound, the four of us headed back into town to the Sewing Hope center to watch today’s class and to talk to the women about how the program was helping them. The program teaches women how to sew and embroider. With these skills, they make their own clothing to sell for a profit to help support their family. Unfortunately, upon arrival, we found that class had been cancelled for the day. There were a couple women and the two teachers there working on their own projects of Bundled Bottoms and pillowcase dresses. We stayed in the small room to see how they worked and to talk to the teachers about how the classes were run. It wasn’t exactly what we had hoped for, but we were glad to have talked to the teachers and a couple of the women who the program was helping. We came back just shortly before the rest of the team arrived back at the compound.

The team was reunited over devotions, reflections, and a large, delicious dinner. Currently, there is a heated game of Nertz happening in the common room and a spoons tournament planned for later in the night. We started off as 13 people who did not know each other all too well and were decently awkward on the first couple days of travel. We are now 13 people laughing, yelling, and competing with each other over pushed together dinner tables. It has been a comfortable transformation and great seven days with the rest of the group. We are sad, but ready to work hard on our last full day in Haiti tomorrow!

Good night from Pignon, everyone! Bondye