Weary muscles, happy hearts, and did we mention we love our cooks!?!

Written by Jazz  with the Very Core team from Third Reformed Church of Pella, Iowa

Today we started out splitting into two groups: one to garden, and one to pour cement. I was in the cement group. We poured concrete for the floor of a house with five rooms, and created a porch in record time. With just the Haitians doing it they said it would take them three days, but with our help, we were able to complete it in only three hours! It was cool to see how they mix concrete with very little supplies. The people who went to the garden pulled weeds. We all got very dirty! 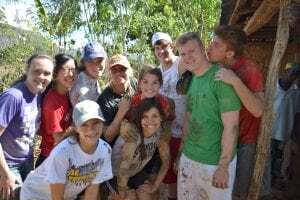 Next we distributed the beans and rice packages, we put together. We also had fabric dippers and dresses people made for children. When we arrived at each house who needed food and clothes, we would introduce ourselves and ask them about their family and their faith. We would give the gifts to the family as we explained these were gifts from God, not us. We asked each family if they had prayer requests, and asked to pray with them. What really got my attention was they all said they had many problems. They weren’t just small worries.  It was either someone was sick or the parents hope they can pay for their children to go to school. When we were praying for them, I felt a sense of peace in the family. They were so thankful we came by to tell them God loves them.

Lastly we went to the orphanage to perform our skit again and play with the children. They knew English pretty well and they seemed to like the skit. We had a relaxing time coloring with the kids and some wanted to play on their playground. They were calm, friendly, and easy to get along with. Overall it was a great day, doing many different things to serve others, and show Gods love through prayer and joy. Not to mention all the great meals we had today. We are so thankful for our cooks!

Written by Shanae Burch  with the Very Core team from Third Reformed Church of Pella, Iowa

All I can say is, wow what a day. Today started off as soon as all the chickens started their calling, which is something I am getting used to along with a little bit of sleep deprivation here and there. Previously informed about what was going to be done today, we packed some work gloves and some work clothes because it was going to be a workday. Eating a well planned out breakfast, made by Beatrice and Evenie, was a great start!

At first, we had no idea how to make concrete so we watched how the Haitian workers made it. First they put stings and steaks inside the house. They brought a leveling tool to make sure the floor is even. The whole process of how they made the floor was pretty awesome. For the next step, they took the gravel and laid it inside the rooms where there was lower spots in the room. Then they took the crushed up gravel and the concrete and mixed them together with water. This, my friends, is the Haitian way of making concrete! It was really interesting seeing how they didn’t let the lack of supplies affect what they needed to get done. They used what they had to get the job done! They didn’t need a concrete mixer truck to mix their concrete. Our group caught onto the process pretty quickly, and the macho men started picking up the buckets. The girls made an assembly line and we passed the buckets down the line into the house for the Haitian men to pour. They were very friendly and sweet to talk to.

One thing that has helped me throughout this trip is the amount of French I know. I took 3 years of French prior to coming to Haiti and the language of Creole takes French words to form their language so I can understand and speak to some of the people there. It’s really fun to try and understand them and what they are trying to say, as well as getting to know them. Anyway, the men that were helping us pour said they lived in the neighborhood and helped out because they were friends with the people that lived at the house. I thought it was sweet how the people would lend a hand for others. My first impression Haitian people, was that they were of a, “fend for themselves” mentality, but now it’s a little different. I think they are helpful and always caring for their neighbors. After we got done pouring concrete, we walked back to our house and ate lunch. Our cooks are so great! They cook the best food and I enjoy everything they prepare for us.

After lunch we numbered off into groups again. We were going to go to different communities and give some supplies to each family. The poorer families were picked out before we arrived, and were given the supplies. We walked up to the families and the look of relief and thankfulness filled their eyes. The families we visited had up to 11 members in one small house. Most of the houses had dirt floors with little to nothing in them. My heart broke for these families. They are children of God and are exactly like me. I am no better than them. They are in desperate need of love, food, necessities, and a clean home. Each family greeted us, as we brought one bag of rice, a pillowcase full of beans, and a container of vegetable oil. Our group asked how we could pray for them. They mostly said protection, Gods provision, and their children’s lives being prosperous. We prayed a blessing for the families and their children. I felt very peaceful at this time, like God was moving and present. Maybe He won’t make their lives perfect instantly, but I do know that He will provide for them, and never leave them. We gave some of the kids and children dresses and diapers, so they could have at least one other thing to wear. One of the women I came across, had two children walking along side her. The girls didn’t have any clothes on, so I gave them dresses.

A grandmother came up to me and asked me if I could give her anything. She would take absolutely anything. This was a highlight of my day because I could communicate with this elderly woman and ask what she wanted. She was so precious and reminded me of my own grandma. She told me she was tired and she just wanted to sleep. Ali Cranmer, Nick Corbin, and I walked her to her house and helped her lay down. Her bed was a single sheet on a dirt floor. It made my heart so heavy. The woman kept saying “le coucher” which means bed in French. I just felt helpless because she was asking me to do something but I couldn’t fully understand what she wanted me to do. We had to go before we could figure out what she meant. I just wanted to help but I couldn’t.

We returned home and got ready to go to the orphanage in Pignon. The children there were so beautiful. One girl, named Lou Lou, came to me with a huge smile and took my hand. We sat down together to watch the skit that our group put together. The story we acted out was the story about Moses and how God will protect his people. Even baby Moses in the basket. The children had a laugh at the guys with their hats and machetes. The kids loved the skit and got little babies and cars for them to play with. They adored this gift and couldn’t stop talking about them. It would have seemed like the girls never had a doll in their lives. Lou Lou and I colored pictures together, and then traded at the end. I gave her one that I drew and I kept the one she drew. Before we left, Lou Lou held me so tight and said she didn’t want me to leave. It was so cute and made me sad that I was leaving. I love building new relationships, but it’s hard to leave them.

This day was very full and my muscles are now hurting, but it was so worth it because we helped give a floor to a family, shared God with bunch of families, and made the orphanage kids very happy. This world needs more happiness and I am happy to say that today we made a little more happiness appear in parts of Pignon. Bonjou from Haiti.