Want to catch up on the previous days? Click here to read – Day 1 and Day 2.

I don’t know about other people, but today was one of the most active days I have had yet. There was lots of walking, sliding, pushing through crowds, singing with kids, etc. This was also the most tiresome day I’ve had so far, but the exhaustion was worth it.

Half of the group started the day at 5:00 Haitian time to climb Mount Pignon. This group included Russ, Ellie, Lori, Sheldon, Christi, and me. The climb up was steep, rocky, and slippery, but the higher we got, the more Haitian boys joined us and helped us up the mountain.  The rest of the way was steeper and the air was thinner, so my breaths sounded like I was going to die, but I made it to the top. I decided to climb to the top of the cell tower on the mountain. I made it to the very top, while Calise only made it ¼ the way up. The descent down the mountain was much more slippery, and I fell… twice.

After we got back to the dorm, and freshened up, we went to a kid’s club. The first thing we heard was the kids singing a song with the loudest voice they have! It was amazing, and shamed our little Sunday school songs! First, we handed out peanut butter sandwiches. That was followed by a skit and handing out snacks, care packets and paper fish. Not everyone got everything, but everyone got something. We ended there by singing a song, and attempting to sing with them.

The view from the back of the special Easter party with the Kids’ Club! A child with his gift at the Kids’ club.

The team walked to the densely crowded market and pushed through the thick crowds. We saw wandering ducks, dogs licking up bloody scraps of meat, goats struggling to be set free, and cattle just standing there. Russ and Dawn bought a machete each, while Dave and Dawn bought charcoal from an elderly lady who needed the money. Also, we bought 2 baskets from another elderly lady who needed the money. 2 younger people tried to steal the money right after saying that she was too old, and she didn’t need it, but we stood by her and she kept her money.

We went back to the dorm to eat lunch and then the team split into 2 groups. One group went to give food to families who needed the food. The other group went back to the market to buy supplies for Pastor Diony and to make the food called deuce. I went with the group that went to the market. First, we went to the construction site to see where the new market was going to be. The workers there told us they were hungry and couldn’t buy food because they weren’t paid yet. We went and bought them some food, but we think that they thought we probably weren’t going to get them food. The team that consisted of Dave, Calise, Fran, Christi, and me went back to the main part of the market and bought sugar and milk for deuce, and vegetable oil, spaghetti, and candy for Diony. After we had our items, we went to the Many Hands for Haiti office to wait for the rest of the team to pick us up. At the office, we packaged rice, beans, veggie oil, and bouillon for a family that had their house burned down, and lost a son about a year ago. We knew they lived by La Victoria (where Pastor Diony preaches) and wanted to bring them food and bless them.

Back at the dorm, we had a supper that included rice and beans, and spaghetti. Also, I got my hair in cornrows by a lady who was willing. They hurt to get them in, but the finished product turned out perfect and pretty. We ended the day with devotions and then did whatever, so I chose to blog and then go to bed. I think that this had been an eventful and fun day with hair pain, and climbing experiences.

Today was one of the most eventful days so far. I almost think that each day, things seem to get more and more exciting and fun. I have experienced so many different things so far, it has all been overwhelming as well as inspiring. I wish that I could tell you everything that I saw, but not even a whole book could capture everything. Also I am very tired so my writing won’t be as good as it normally is. I’m going to start by telling everyone a brief explanation of all the amazing things that I experienced today.

This morning, a few of us woke up at 5:00 A.M. to hike Pignon mountain. It was a very rough hike and the trail was very loose. But of course, the Haitian boys that came with us had no trouble at all walking up and down the steep mountain in flip flops. There was a beautiful view of Haiti and the sun coming up between the mountains. When we reached the bottom, we got in the truck once again and headed back for the dorm.

It felt like the middle of the afternoon, but really it was only about 8:00. We also headed to the kids club. That was also so amazing to work with those hundreds of children. Before we got in, we could hear the kids singing louder than I have ever heard people sing. We handed out sandwiches that we made the night before, juice bags, snacks, and care packages. We also put a skit on for them and they LOVED that. That was so much fun.

We all went together as a group into Pignon to the market. There were hundreds and hundreds of people there. It was incredible to see this different type of market at work. A lot of the shops sold a lot of the same kind of things. People in our group bought charcoal and machetes. We also saw a very sad thing happen to. We saw a little, helpless old woman sitting down on the ground with baskets for sale. We purchased some of those baskets from her because we could tell that she was in need. It was sad to see how protective she had to be of those dollars so she would not get stolen from. Overall, it was all very amazing to see that lifestyle and the way that people make a living.

In the afternoon, we spilt into two groups. Dave, Jocelyn, Calise, Christi, and Fran went back to the market to buy food items. Both my parents, Jay, Craig, and Dawn went to bring food to some of the poorest families. We also passed out bracelets, and toys to the kids. It was amazing to see the joy and gratefulness on their faces for the blessing we were to them. We spent time with them in prayer and talked with them for a little while.

The team blessed families in need. 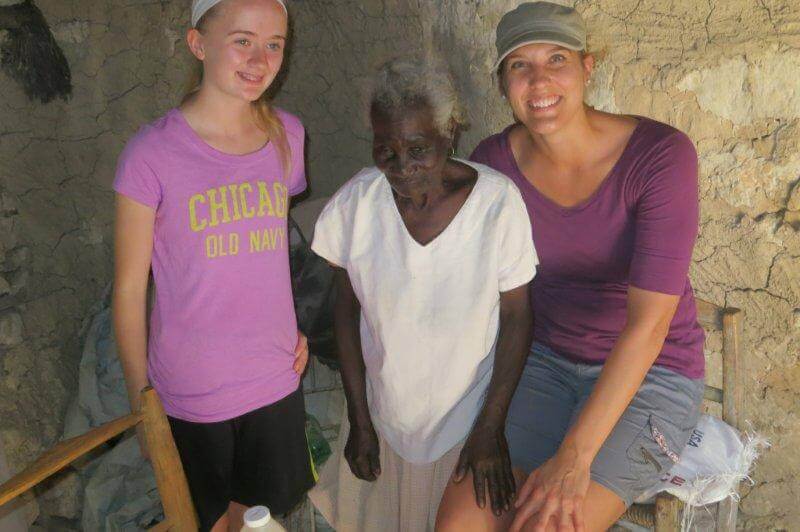 Walking with families and providing much needed food in Jesus name. Such a blessing to be the hands and feet of Jesus.

When we got home, we played with kids for a long time. We had them try pop rocks, I painted a little girls nails, and tossed a ball around. We also did some really amazing devotions, which caused tears to shed. Experiencing Easter here is very different than I’m used to, but all the more better.

It has been a great day and I can’t wait to see what the week will bring. It has been so much fun already and a very important event in my life.