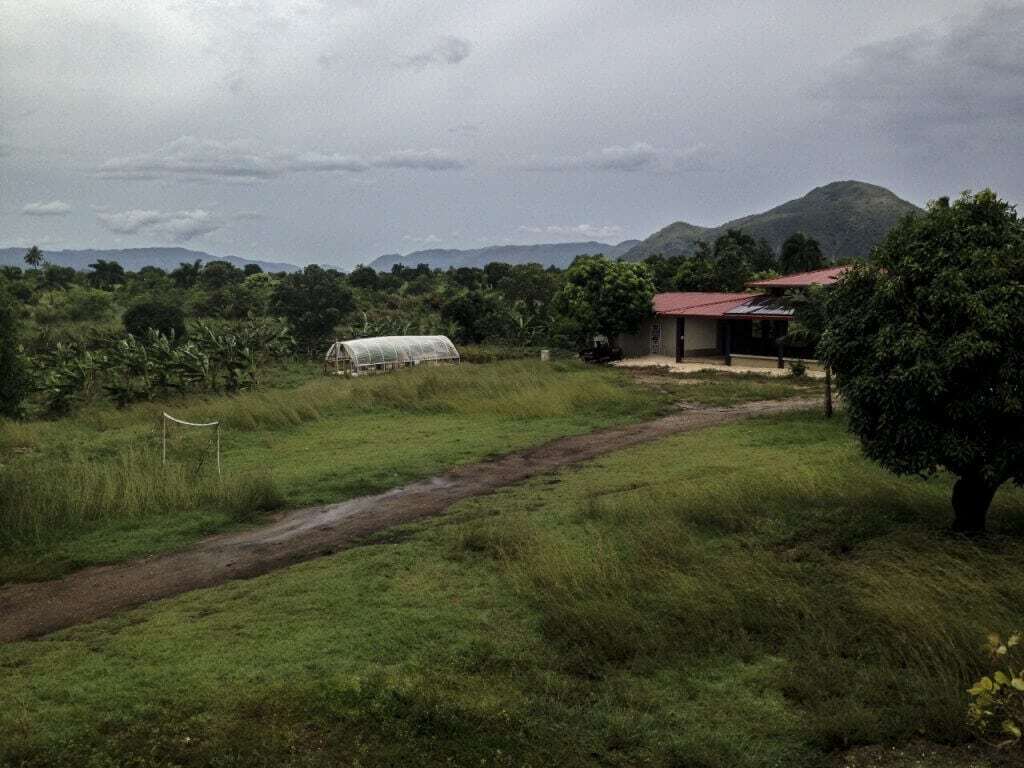 We heard the weather report on Friday through our friend Jennifer.
She was gracious to us newbies and shared her knowledge about Hurricane season and a few stories of cyclones past. I joked about Matthew being followed by Mark, Luke, and John.

I take it back.

He was said to arrive Sunday, but I guess Hurricane Matthew takes his Sabbath’s seriously.

The government did call off school for two days though and when we got wind, Heidi rushed around Sunday night, calling parents, cancelling both the preschool and the Thrive program.  As night fell, the whole country lay in wait.

Monday morning arrived overcast and ominous, but still no storm. The air was dead calm but the anticipation so thick, you could taste it. The whole Staff showed up for devos but it was obvious no real work was going to be done today, so we started in on the monster list of things that needed to be prepared around the house. Kalot filled the generator with gas, Heidi filled water jugs. Felix and I climbed the roof and shut all the high windows, then Appolon and I went to the bank. Kalot picked me up at Fankoze in the three-wheeler and took me into town to buy supplies. We filled up on some staple food supplies to have on hand as resource for whatever may come. I also purchased water bottles, toilet paper, avocados (10) and some Pringles. Craig and Christi instructed me to think about what we might need if things get bad and we were stuck without supplies for a month. On second thought, I should have taken more toilet paper … and Pringles. 🙂

Our campus is located on the north side of the Central Plateau. The plateau is nestled in by mountains on all sides. While the mountains will block a lot, we still anticipate heavy winds and lots of rain.

Monday night, 11:40pm and I’m feeling wind, it’s intermittent but strong. The whole house is shut up for the first time since we moved in. The shutters moan and creek as they clap in the huge gusts … what a sharp contrast to the eerie stillness of the day thus far.

I get word around midnight that there was an ocean surge on the southwest coast at La Cayes. Homes and buildings gone.

Tim, sends another doppler photo showing expected winds of 145mph along the coast. It shows the storm; big, red, and creeping our way at a slow but steady 7mph. I start to feel the reality of it all. My stomach hurts so bad, water starts to leak out of my eyes.

I’ve been praying all day for mercy, asking God to change the direction of the winds.

His plan is not that.

What a strange mixed bag of emotions. I feel safe and at peace, yet there are so many people living in stick and mud huts that will be washed out in the heavy rains. And crops growing tall that will topple in the wind. And people, only 50 miles away that will probably die tonight. I can’t even express what I’m feeling for them.

Tuesday 2:00am and the rain arrives. It’s gentle for now. Tim says it should pick up and by 8am we will be in the thick of it.

I’m here, in this big cement house, protected not only by heavy cement and tin, but by three wonderful men in the yard who are vigilantly keeping watch, as well as by the prayers and concerns of many loved ones back home.

But people are displaced and possibly dying on the other side of this island.