“You Know Jesus Loves You?”

Liz Clarke has been busy heading up the “Do Something Concrete Project” which puts cements floors in the homes of Haitians who need them most. She shares an update on the impact this project is having in Haiti and in her life.

The Do Something Concrete (DSC) project is my #1 these days (after Jesus Christ of course). By the grace of God and the additional energy of one man, we have kept a steady pace and are right on target with our timeline! The man I am speaking of is the newest member of the DSC team! A direct answer to prayer, may I introduce you to: Pastor Jean-Ronel Joseph!

There is some serious potential for confusion now as you remember that my other co-worker’s name is Jean–Rene. That’s a lot of Jean’s working on the same project! To ease your burden of having to remember which Jean-R I’m talking about, I’ve affectionately nicknamed them JR1 & JR2. In case you forgot what JR1 looks like, here he is pictured below holding a bull-head. Just another day in Haiti!

JR1 holding a Bèf Kòn (Bull head/horns)
It will most likely be used to make a traditional bullion soup.

Jean-Ronel’s (aka JR2) focus is on the pre-assessment and follow-up work that goes into each home receiving a floor. This is truly the perfect role for him! God created him with a kind and gracious spirit and he is a lover of all people who boldly shares Christ with everyone he meets! I hear him ask every family he meets, “You know Jesus loves you??”

Pre-floor Assessment
JR2 capturing some information on one of his first days on the job.

Home assessments capture information about both the family and the house. For example; how many people are living in the house, ages of the children and if they go to school, size of the house, what materials the house is made of, GPS coordinates, etc.

JR1 and myself, taking measurements of a house!
Note: He’s the Big Boss. I just hold the tape! Post-floor Follow-Up = Smiles beyond Smiles!
This gentleman was happier than a clam to receive his cement floor!

Tilus Family = More Smiling Faces Some of our neighbors who in addition to receiving a cement floor, received a newly sided house which included new windows and doors.

Thanks to the generosity of our short-term teams, in addition to a concrete floor, some families have benefited from other home repairs! The family pictured above received a new krepi siding (cement coating over a stick and mud base frame) as well as new windows and doors!

Another house that received a special repair is owned by a mother who is part of our Thrive program. Back in November, she started to construct a new home for herself and her four children. Before this she was renting space at a neighbor’s house before she couldn’t afford the rent and moved back in with her mother who already had 8 people living in her house.

After she learned MH4H was pouring concrete in all of the Thrive family homes (news travels fast), we noticed her working hard to finish the walls of the new house. When we eventually visited to do the initial assessment, we noticed she had attempted to use a tarp as a roof for one of the rooms, while the rest of the rooms were still roofless.

Even though all of the walls were finished, because our project qualifications for receiving a floor do not accept “tarp” as a legitimate roof material, we were unable to schedule her to receive a floor.

She pleaded with us, saying that she had no possibility for a roof at this time and asking us wasn’t there something we could do for her. We could only reiterate that the program was cement floors only and that her home’s current condition was not qualified to receive a floor. We prayed with her, telling her to remember that “God can do all things”. We told her we would return another day, giving her some time to work on it.

That was a sad moment for me, having to turn her down. Knowing she had been working so hard to get her house ready for us and then having to tell her no. Learning to say no is a healthy and OK thing, but in this circumstance, it just felt wrong. All of her neighbors and friends in the program were able to receive floors and she was left out because the timing was off…but was it? I know God’s timing is always perfect…yet in this circumstance it was hard to accept.

That night after dinner, I sat in on our short term team’s processing of their “happys and crappys” for the day. When my turn came, I shared my “crappy” of having to say no. No sooner did I finish sharing my burden when my friend Harold spoke up and said, “Would $100 cover the cost of putting a roof on that lady’s house?!” As soon as his words hit my ears it was clear!!  This was God’s perfect timing! Follow me here for the backstory!

On Harold’s flight from Texas to Florida, he sat next to a lady who politely listened to him talk about his journey to Haiti. He said she seemed disinterested and then proceeded to sleep for the duration of the flight. When she woke up, they exchanged a few more words about their travels when, much to his surprise, the woman opened her purse and took out a crisp $100 bill. Giving it to Harold, she told him to “do something good” with it!

Harold had just shared this story with me the previous evening so it was fresh in my mind and I knew exactly what he was thinking! Let’s get a roof on this lady’s house so she can get a cement floor!!! When we were certain $100 wouldn’t quite be enough for the whole roof, the rest of the visiting team generously pledged to foot whatever was left of the bill. Amazing!

What’s even more amazing is that the woman from the plane had given Harold her business card along with the money and when Harold pulled it out to show me, I noticed that she’s a Realtor! Only God could have set up for her money to be used toward a home build project!

Harold has tried to keep in touch with her since but as of yet has received no response. Regardless, this just shows how intricately God prepares situations for us to walk in. There are no coincidences in the Kingdom of God!

From the Rooftops shout it out! Final Product! Roof + Cement floor = Safe Home Note: since this photo was taken, they have started to mud the walls too! One more layer of protection against wind/rain. Some of the babies who live in the house! 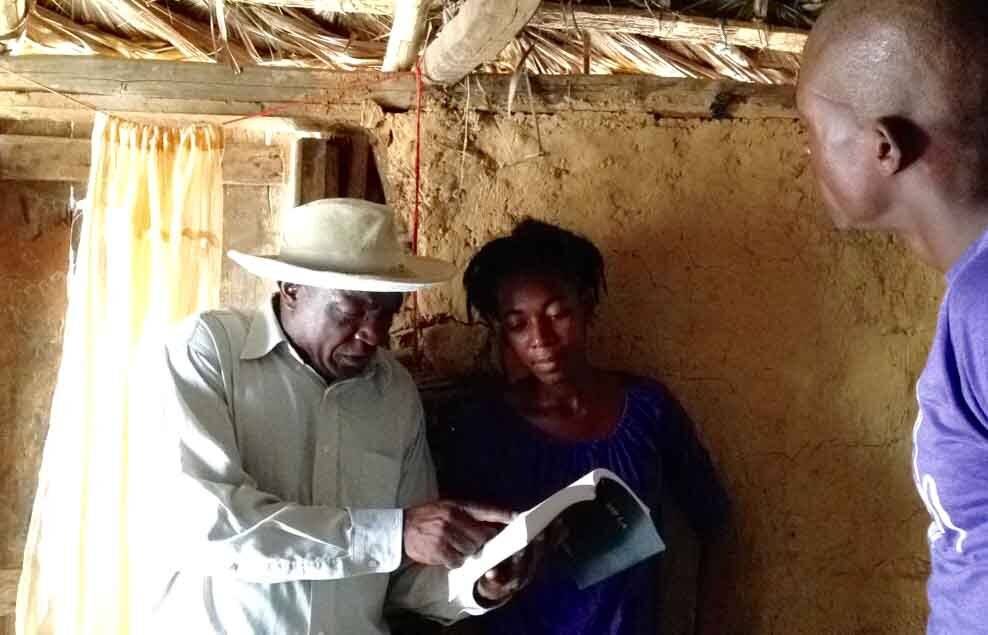 Follow Up with the Word: Each family that receives a floor also receives a Bible. When visiting this house (chosen by the Leadership Group from LaCoste) Pastor Sephirin and Pastor Jean-Ronel shared the gospel with this woman who accepted Christ! Please pray for good follow-up and discipleship by the local church!!

Ten neighboring communities were chosen to participate in the Servant-Hearted Leadership Training program with MH4H. The roster includes 100 individual leaders; ten each from each ten communities. With heaps of concrete bursting our seams, we decided to share the benefit of the floors with these leaders as a great way for them to exercise the Servant Leadership techniques they’ve been learning at the conferences!

Side effect: it has allowed the perfect opportunity for us to meet regularly with and get to know the leaders in each community more personally than we would’ve otherwise.

I’ve been so blessed to hear and see their excitement in getting to do this project! They were all slightly leery at first, but once they realized we were seriously going to give them money and trust them to take the lead on this project, they were blown away! They were grateful for the chance to be trusted! One of the communities shared with us that another organization had been talking about doing a project in their community for years but all it ever really amounted to was talk. They never once put any money or materials on the line. This community was especially so thankful for the chance to Do Something Concrete!

Please be in prayer for this HUGE development opportunity we have been entrusted with.

A home in Lapila receives a cement floor thanks to their local Leadership Committee!

Before we part ways, I want to share a ripple of the DSC project “drop in the pond”. The effects go far beyond those families who are directly receiving cement floors and even the leaders we are working with through our Leadership Development Program. The property owner of the pictures you see below is a husband and father of five children. He also houses his adult niece and mother. Among other things, for him the DSC project means a consistent paycheck, with which he has been able to begin the process of constructing a new home for his family! In the true Haitian fashion, there is only money enough for one part of the house at a time. And as you can see, the foundation is the part they’re beginning with. It took one week to complete. It’s a great start, I’d say! As he and his wife are good friends of mine, you can be assured there will be continued updates on this home build as time goes.

Preparation for… the Foundation!

My life aside from concrete!

Found this rock of love at the top of the mountain.
#heartrocks #haitilove #organic The BEST stapler I’ve ever known. Without it my life of record keeping wouldn’t happen near as neatly. Thanks @joelverhoef! Took a Trip to Cap-Haitian. Christi and I rode atop this truck all the way home! Was fun at first, but 3+ hours later…you can guess what hurt! I love Christi’s adventurous spirit and that night on the way home, we were blessed to watch a full moonrise up over the mountains. Her caption on the event was, “God is Wild!”
Wild, Indeed! Life with this girl (Heidi) = Special!!!!
We’ve been enjoying some sweet times cooking dinner together, encouraging one another, and praying! And life with the guy in the middle (Craig) = exactly what you see! This guys got personality for sure! The Prison House Pet, Mimi.
(Her real name is Steve but nobody calls her that) We love her. We think.