Anaika – The Brave Girl Fighting for Her Life 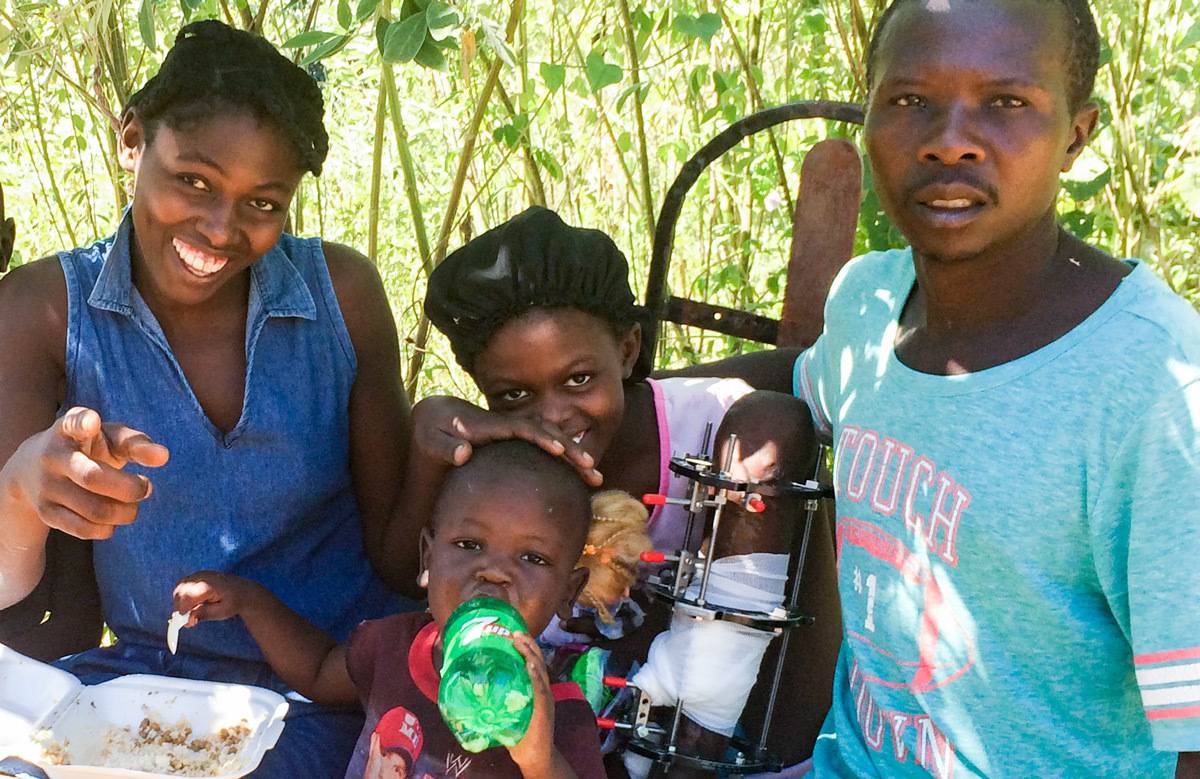 Anaika Derice was born in February 2010 to her parents, Tibens and Anya, in the small rural community of Lacoste, Haiti. Being the second child, Anaika has one older brother as well as a younger brother and sister. She is soft-spoken and graceful with a smile that captures the heart. This girl is also incredibly brave. For the last two years, Anaika has been fighting for life and limb.

“Anya despairingly wondered if amputating the limb would be a kinder alternative.”

January of 2018, eight-year-old Anaika was playing a version of “Leap Frog” with her friends when she broke her tibia (lower leg). Money was tight for the family so a hospital visit was not forthcoming. In February 2018, Tibens took his daughter to a semi-retired cast-maker in town who determined that the cast needed to be on her knee. Unable to pay the bill, he asked Many Hands for help. The cast, set too tightly, caused little Anaika a great deal of discomfort and was soon removed. When Many Hands staff saw Anaika again several months later, the bone had still not been properly set and infection had taken hold, seeping out through the skin. Serious medical attention was needed.

With the guidance of Haitian Doctor Roberta Van Dine, Many Hands sent Anaika, accompanied by her mother, to a hospital in Hinche on May 1, 2018. There an x-ray revealed the true extent of the damage done – a very broken bone that was quite infected. The supervising orthopedic surgeon ordered an emergency surgery that very night. A specimen of the infection was sent to Port au Prince to determine which antibiotic should be administered. An external apparatus was installed to stabilize the leg after surgery. 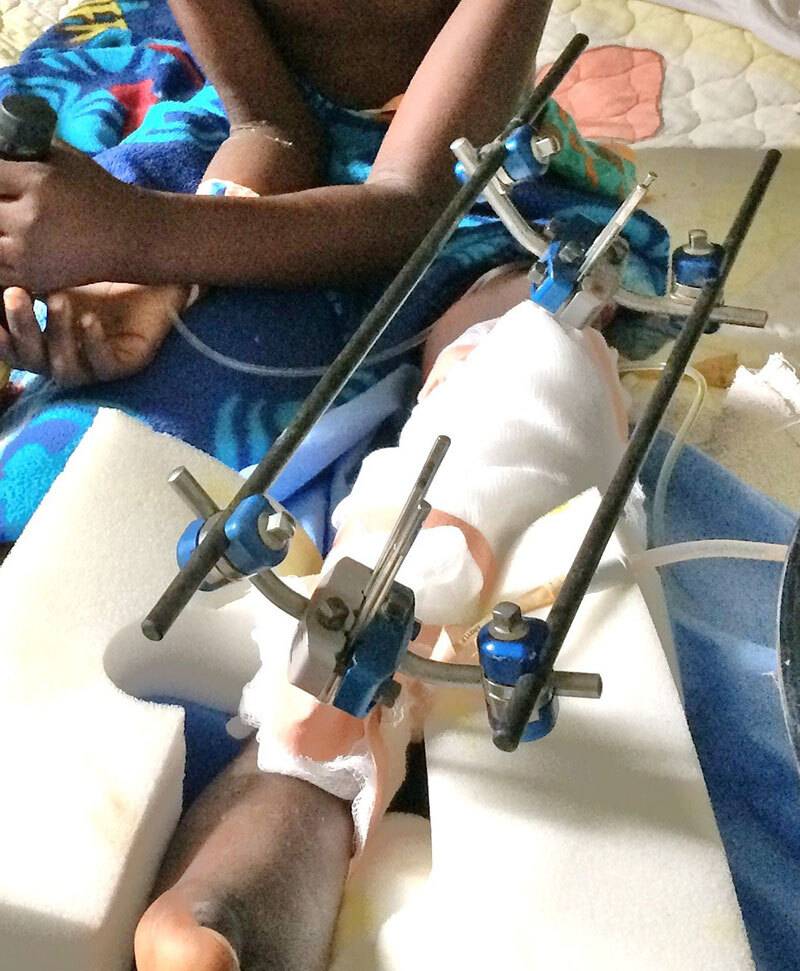 For three grueling months, Anaika remained in the hospital enduring an additional two surgeries as the medical staff attempted to flush the infection from her leg. At times, the family spent the night on the hospital floor to keep Anaika company during her lengthy stay. Anaika’s mom, Anya, struggled to physically and emotionally support her oldest daughter while also caring for three other children. Seeing the extent of the damage to Anaika’s leg, Anya despairingly wondered if amputating the limb would be a kinder alternative. All the while Many Hands frequently visited the family to offer encourage-ment, toys and books to brighten the dreary hospital room, and to share a hot meal. Hearing of Anaika’s situation, caring friends of the ministry helped relieve the costs of her medical care.

Finally, Anaika was brought home. Many Hands was able to provide both crutches and a Mobility Cart from Mobility Worldwide to accommodate the doctor’s orders – Anaika was not to put any weight on the foot. 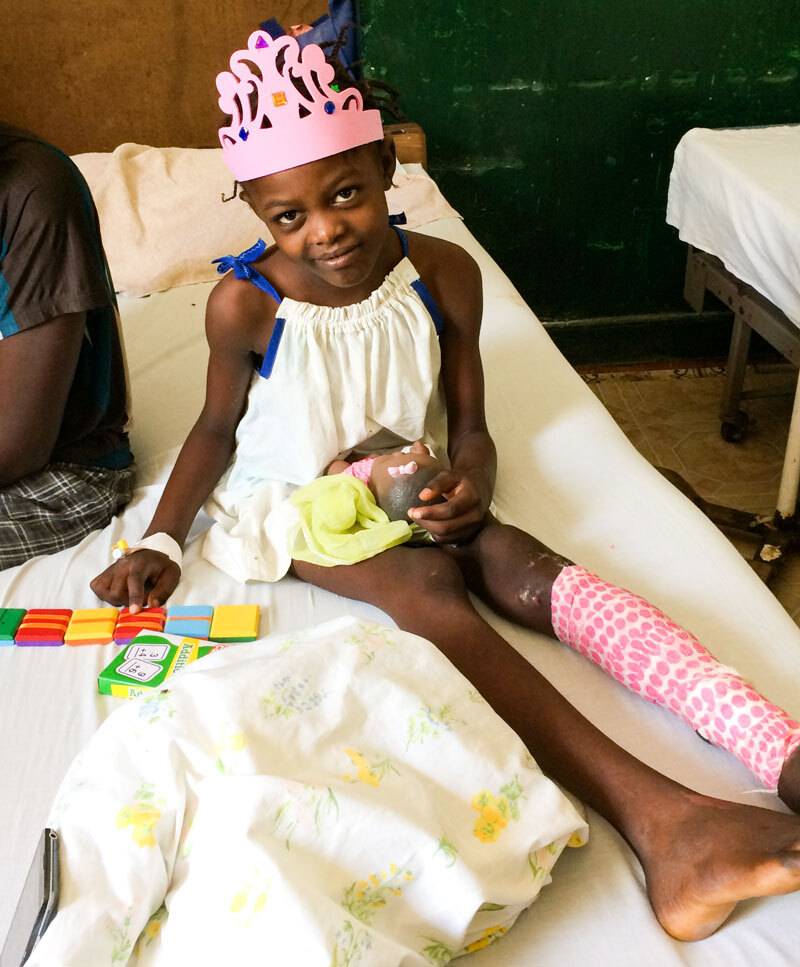 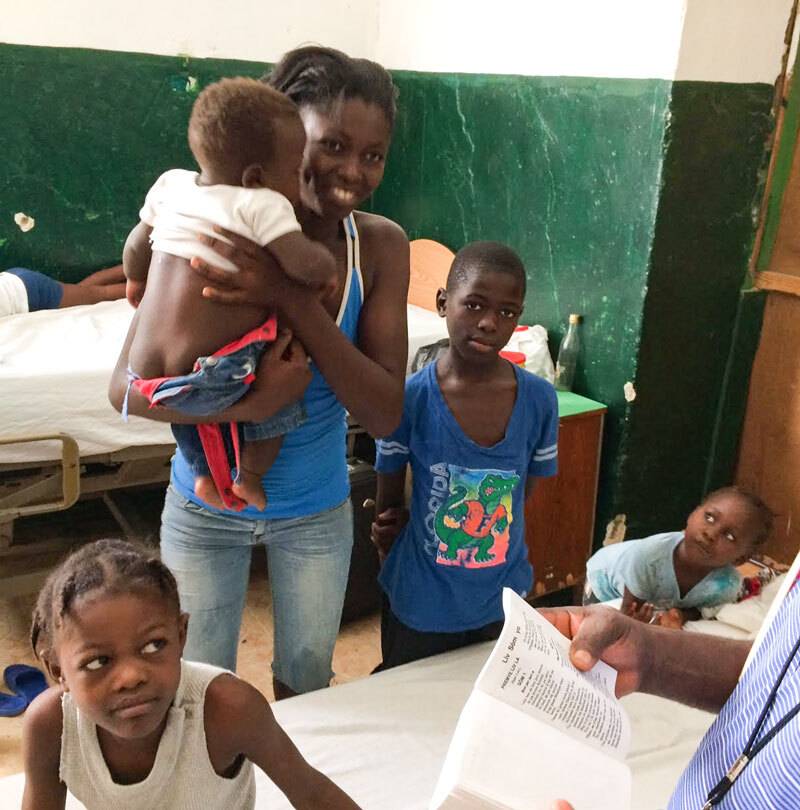 “Tibens raced to speak with Many Hands staff. Was there nothing more that could be done to save both his daughter’s life and limb?”

One year later in May of 2019, Anaika’s leg was no closer to healing. Many Hands again stepped in to help, sending Anaika to a local hospital for another x-ray. This hospital’s resident orthopedic doctor also ordered a culture be sent to Port au Prince to identify the infection still plaguing the wound. In June, the doctor arranged a procedure to flush the infection from the leg. This time, Anaika was in the hospital for four weeks.

After Anaika was released, a nurse at Dr. Roberta’s clinic cleaned and bandaged the wound every two days for nearly four months. In October 2019, attending medical personnel declared that nothing more could be done to heal Anaika’s leg. Fearing this infection would claim her daughter’s life, Anya was again prepared to have the leg amputated. Upon hearing the news, Anaika’s father, Tibens, raced to speak with Many Hands staff. Was there nothing more that could be done to save both his daughter’s life and limb? 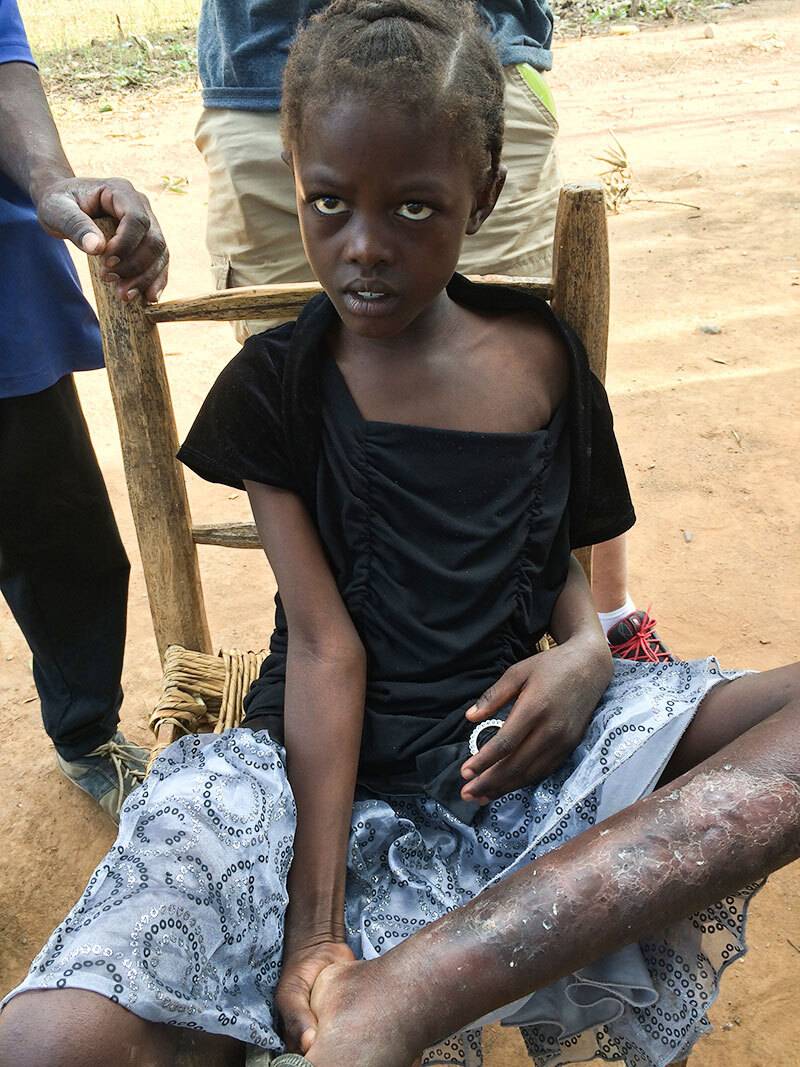 Through research, Many Hands found an American Orthopedic Surgeon, Dr. Scott Nelson, who worked at the Diquini Hospital in Port au Prince , Haiti. In discovering that Dr. Nelson was confident he could address Anaika’s broken leg and the infection, plans were made to send Anaika to Port au Prince. Once again, faithful donors stepped up to fill the financial need.

Traveling with the Mission Aviation Fellowship from Pignon to the capitol, Anaika, her mom Anya, and Christi Gabhart (Many Hands Operations Manager) arrived at Diquini Hospital on October 25th, 2019. 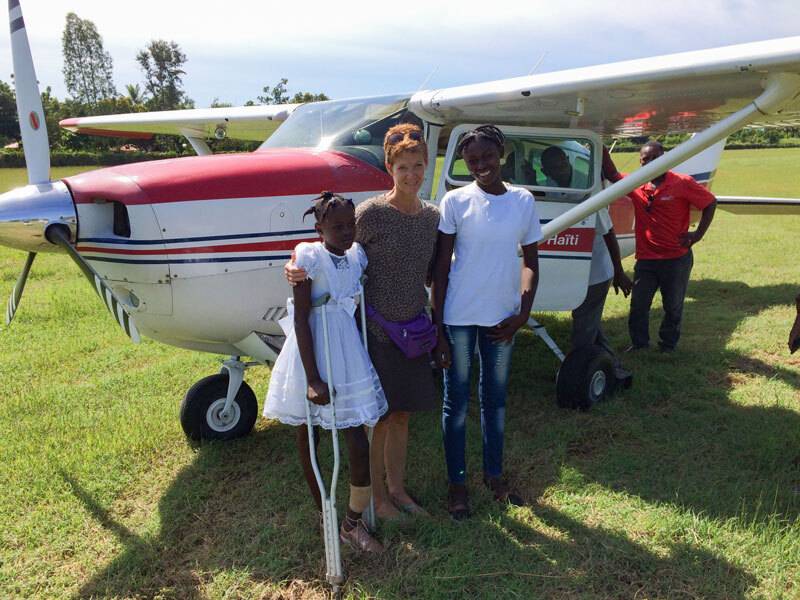 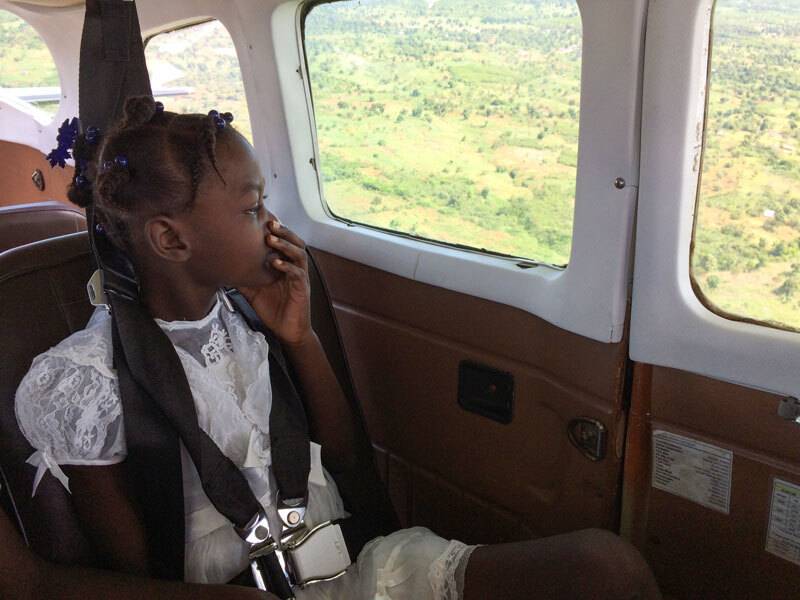 On October 28th, the medical team and Anaika entered the surgery room. Dr. Nelson was able to clean out the infection, removing minimal bone to allow the broken pieces to fuse back together. Necessary adjustments were made to external fixation hardware, allowing Anaika’s foot to heal properly. Anaika was instructed to return home and relearn how to walk and play like a normal ten-year-old. 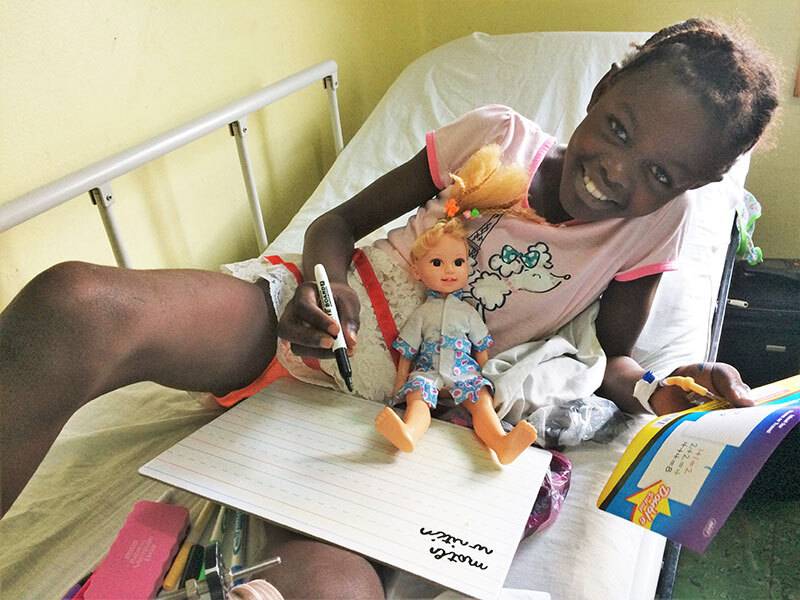 However, Many Hands staff did not know how they were going to arrange the return journey. The country of Haiti has seen an increase in political unrest since July 2018 making travel in the capitol city difficult and, at times, dangerous. By God’s provision, a local pastor heard of Anaika’s story and used personal connections to arrange a police escort for Anaika, Anya, and Christi from the hospital and safely out of the city. 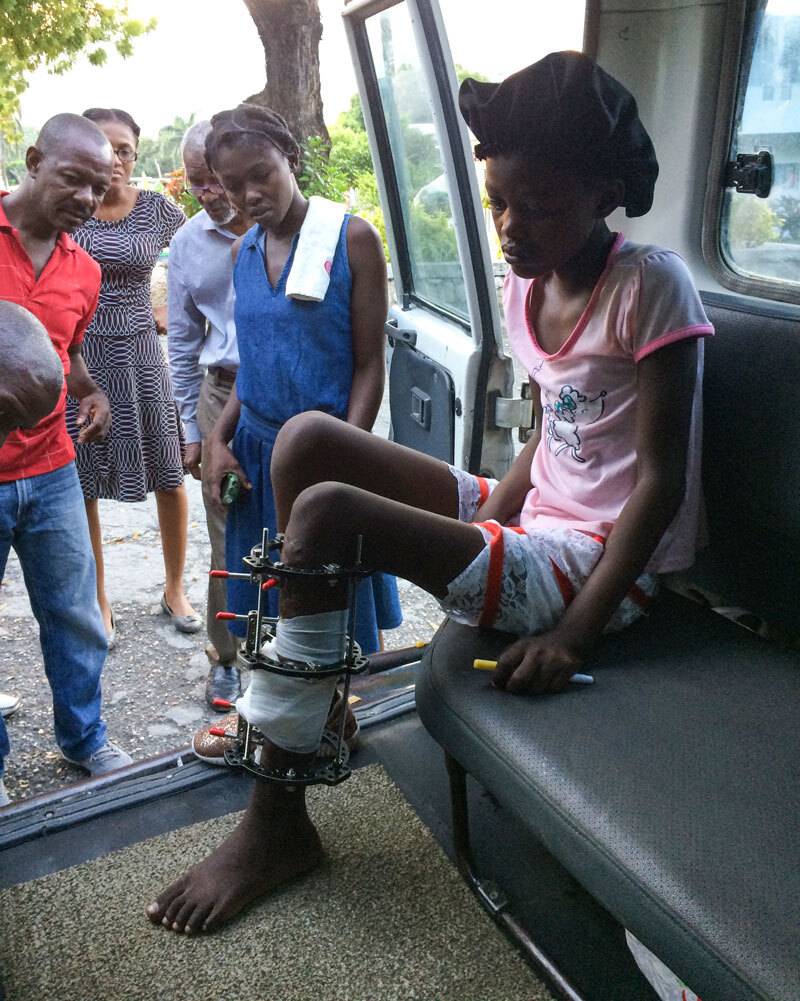 Upon returning home, Anaika was rather hesitant to bear weight on a leg that pained her for so long. Many Hands Spiritual Direction Manager, Shelly De Ruiter, has called on her thirty years of experience as a physical therapist to walk alongside Anaika, teaching her muscles to walk again. Many Hands also currently providing regular meals to ensure Anaika receives the proper nutrition during this critical healing process. For the immediate future, Many Hands will remain in contact with Dr. Nelson sharing monthly x-rays and updates so he can monitor Anaika’s progress from a distance. 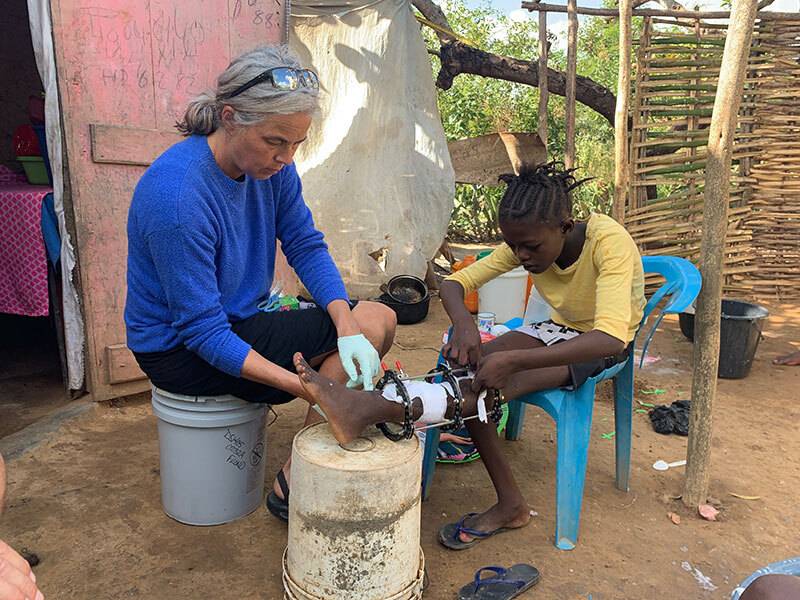 Looking back, Many Hands’ staff recognize the many people who were called into this desperate situation, answering the pleas for help from a family in need. Surgeons, doctors, donors, prayer warriors, and more from different nations and tongues standing united. Though it all, God’s healing hand was able to move through those choosing to be Love in Action, working together to save the limb and life of this strong little girl.

Since her surgery, Anaika’s strength and confidence continue to grow by leaps and bounds. She is unafraid to move forward, pushing the boundaries of what she could do the day before. Anaika’s courageous love of life challenges those around her to address their own difficulties with bold faith fully expectant to see God work on their behalf. 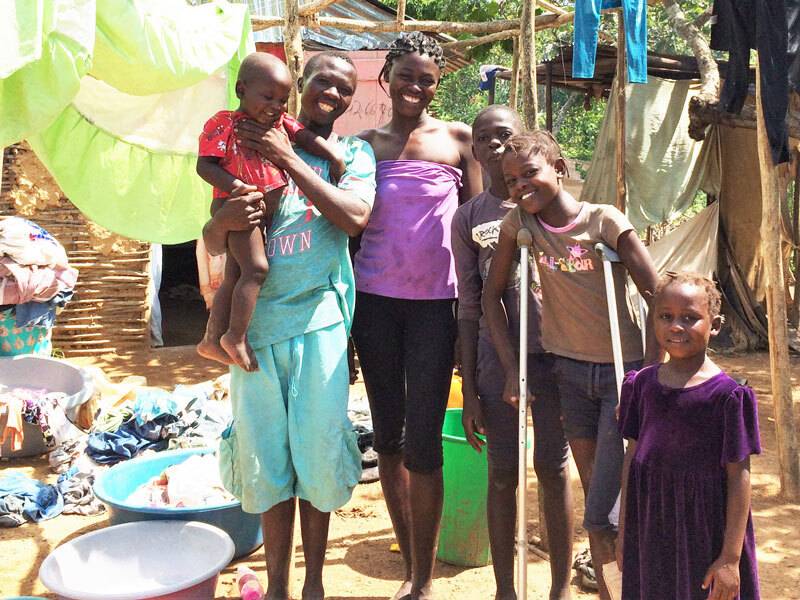 BECOME LOVE IN ACTION FOR OTHER CHILDREN LIKE ANAIKA.

GIVE JOY TO THOSE WE SERVE.
SEE OUR GIFT CATALOG

BECOME LOVE IN ACTION FOR OTHER CHILDREN LIKE ANAIKA.

GIVE JOY TO THOSE WE SERVE.
SEE OUR GIFT CATALOG 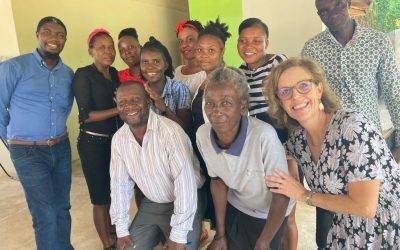 The Joy of Community

Mark and Melissa Kauk share their reflections after serving in Haiti for the last month. 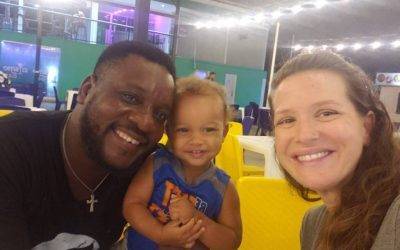 Liz Clarke-Aldonza has been on sabbatical for the last several months. She shares in today’s blog how she and her family are following God’s lead amidst challenging circumstances. 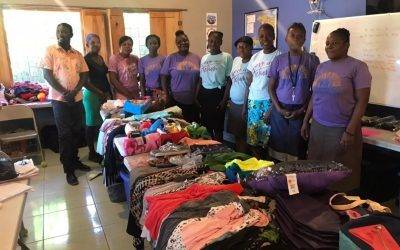 Mark and Melissa Kauk share their reflections after serving in Haiti for the last month.