A Love in Action Story: Mayson 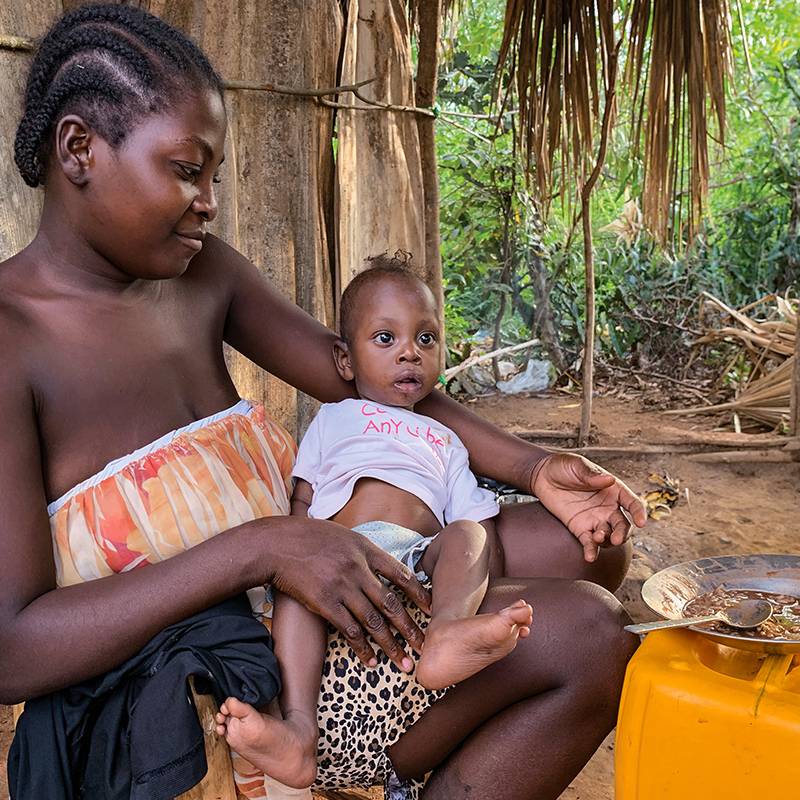 The Many Hands staff met the Jean family soon after they moved to the Sylvain community. After Mayson was born in August 2018 the staff invited his mother to participate in the First 1,000 Days program. Ysemanie, Mayson’s mother, went through the motions of joining the program but life drew her commitment elsewhere. Many Hands saw little of the Jean family for the next six months.

In January 2019, the First 1,000 Days staff went to the Jeans’ house for their annual home visit of all the program participants. Mayson was sick and underweight. He should have been transitioning to solid food but, at six months old, Mayson could barely drink milk. Ysemanie explained that her son frequently vomited after feeding. A visiting pediatric nurse was able to evaluate him. Acid reflux was determined to be a possible cause with a month-long anti-acid treatment prescribed as a trial.

Nurse Lerosane checked on Mayson several times over the following four weeks. Lerosane noted that Ysemanie did not strictly adhere to the treatment schedule, frequently augmenting it with a homemade garlic remedy. At the end of the month, Mayson was not any better. Over the next few months, staff watched as Mayson’s body grew increasingly frail. A feeling of helplessness grew as the staff saw that death was imminent.

“I will not give up on this child!”
“I will not give up on this child!” one staff member declared, “This baby is part of our program. I refuse to stand by and watch him die. We have to do something!” The battle line was drawn and a challenge was issued. Staff gathered in the nurse’s station to pray.
“We have to do something!”
Pastor Wilna went to talk to Mayson’s mother. Ysemanie confided that she feared that Mayson had been cursed with a spirit that attacked him. Ysemanie was actively engaged in a battle using voodoo to win her son’s life back. Nurse Lerosane and Pastor Wilna spent a lot of time encouraging her to give up that battle and to trust in Jesus. But how could she stand by when her baby was at stake? Ysemanie had to fight the only way she knew how. While the spiritual battle raged on, Mayson and his health continued to deteriorate.

The staff tried every method to walk alongside Ysemanie before a firmer intervention was needed. Mayson was sick, malnourished, and near death. He needed to be hospitalized and the staff needed Ysemanie to agree.

Once again, staff gathered to pray before inviting Mayson’s mother to a meeting. Seeing Mayson’s physical state, Lerosane begged Ysemanie to pause her activity in voodoo for one month, allow the staff to take him to the hospital, and see what God could do. Weary from the fight, Ysemanie gave her consent.

Mayson went directly to a hospital an hour away, where Lerosane could monitor his progress. Mayson’s mother and grandmother stayed by his crib day and night; his father and older brother came for frequent visits. Mayson’s severely malnourished body received intensive care, starting with a feeding tube. By the end of the month, he could drink milk on his own and eat medicinal peanut butter designed to help kids gain healthy weight. Four long weeks later, Mayson was released from the hospital into the care of his family.

Mayson is now just over two years old. Nurse Lerosane reports that he is charting a healthy weight at nearly twenty-five pounds. A year ago, Mayson was not strong enough to support his own head. Now, this toddler is walking, running, and proving himself to be quite rambunctious. Ysemanie and Mayson have become regulars at the First 1000 Days program. They both receive nutritious meals and a community of support. Five days a week, the staff can see the little boy whose life they prayed and fought for.