9 people live in this house

This is Leslie Pence and Samantha Reece reporting live from the MH4H compound in Pignon. Our day began a little later than usual with the breakfast bell pealing at 7:30 sharp. We braved the muddy roads yet again to the MH4H banana/plantain fields for some morning exercise of wheel-barrowing and fruit plant tossing. This has been our third day out in the sweltering fields, allowing the relationships between our team and the Haitians to greatly develop. This makes the working conditions enjoyable. Both Samantha and I (Leslie) worked on different tasks this morning. Samantha directed the Haitian and American wheel-barrow traffic, while Leslie began planting banana tree plants. Reflecting on where we started, we have now accomplished filling roughly 1,200 holes with organic matter and planting 27 rows with trees. We have been blessed by the Haitian workers and their children’s attitudes and their willingness to work alongside us “blancs.”

After working, we came back to the compound for some relief from the beating sun and replenished our food and water supply. We then traveled to John Revere’s school and church to assist with a local Vacation Bible School (VBS). The children’s lesson was a reminder that God knows each of them by name and loves them no matter their circumstances. This lesson proves itself to be relevant in Haiti as many feel like they are unworthy to become a Christian or join a church based solely upon their lack of appropriate clothing or shoes to wear. Each of the team members were able to bond with two or three children by assisting them in making bracelets that spelled out their names in colorful beads. When that was finished, the children were released for a recess, allowing the team to play with all of the kids. We broke out the parachute, nail polish, and soccer ball; however, the human jungle gym proved to be the favorite of all. Time with these beautiful kids went far too quickly, but we find comfort in knowing that we were able to impact their lives in a positive manner.

A meal is part of VBS.

The team continued on with the day by distributing five more meals of rice, beans, oil, and bullion cubes to impoverished families in the community of Pignon. Seeing the shambles that many of these people lived in was truly heartbreaking as they fear for their homes of mud and sticks during every rainfall. With these living conditions brings illness and an unsanitary quality of life. My (Leslie) low came at the last house that we delivered food to. The neighborhood boys gathered outside of their fence to watch what we were doing and one specifically stood out to me. This boy had an extra finger dangling from each hand and his eyes were cross-eyed. I knew that with the severity of his eyes, that he would soon go blind. It broke my heart knowing that with a simple pair of glasses his condition could be corrected, but that chance would never happen.

We came back for a dinner of rice and beans and enjoyed singing “A’lam Kontan” with Ebens and the cooks. That time of sweet fellowship broke the barrier between the MH4H staff and Iowa (and Illinois) team. Jake De Ruiter had the wonderful idea to hold a talent show between the teammates. He blew us all out of the water with a spot on rendition of the Evolution of Dance music video. Now as we write this, we can hear the laughter and competition of “Monday Night Game Night” between the members in the main room.

We were able to make progress in getting medical care for Elinise.  After arriving at the clinic to see a doctor and some changes in plans that are becoming more and more expected, we were able to have Elinise evaluated by a pediatrician!  Because this happened, she can now begin receiving physical therapy.  The PT from the hospital plans to see her 2X/day at her home. The doctor gave prescriptions for Vitamin C, a decongestant, and something for epileptic seizures.  A follow-up appointment is planned for Monday with an orthopedic doctor.  The PT also hopes to contact a neurologist in Port Au Prince.  It was amazing to see the timing of everything come together – one of the medications that we could not find here in Pignon will be able to be picked up in Hinche, where Jean Renae is planning a trip to tomorrow (he goes once every couple of months). 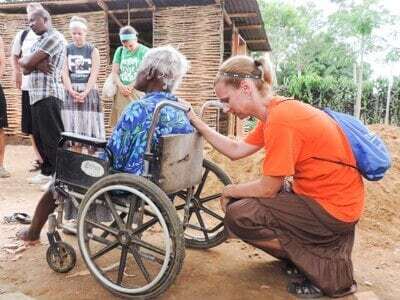 Praying with a family