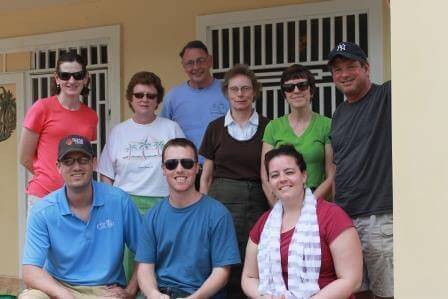 The day got off to an especially early start for Pastor Tim and Bill as they had decided to climb to the top of Mount Pignon with a young Haitian guide, Dasley. The rest of us enjoyed a rather leisurely start to the day.  Along the way to Pignon, we passed many small groups of people on their way by foot, donkey, horse, and motorcycle to the market.  By 9:00 AM, we were together again at the house where Heather and Cassidy live.  We walked through the streets of Pignon to the market.  Items were all over the place – everything from clothing and shoes to bags of grain to butchered goat to deep-fried food.  Somewhat apart from the main part was the livestock market.  There were three main parts: cattle, goats, and pigs.  The goats which were purchased for our distribution came from that market.

Some of the delicious items for sale at the market

After some time at the market, we walked through other parts of Pignon with a stop at the claron (alcohol) factory and the river.  The river is a common gathering place where laundry is washed, bathing is done, vehicles are washed, etc.

We had lunch at home base and later returned to an area just past the airport (a grass field) in Pignon where a community gathering was held.  Jean-Robert conducts school classes there, but the gathering today was for all from the area.  A time of worship was held during which Pastor Tim and Zeke’s wife Bebe read the story of Peter walking on the water in English and Creole.  During the Creole reading, the rest of the team acted it out with Tyler as Jesus and Bill as Peter.  The worship time was followed by fun time.  Older boys played soccer and Frisbee, others had bubbles or paper and markers.  Terri, Dorthy, and I painted fingernails.  Later food was served to all.  The best estimate was that there were 250 -300 people at the event.

We had a lot of exposure today to the Haitian way of life.  It makes me appreciate all of the blessings that we have at home.