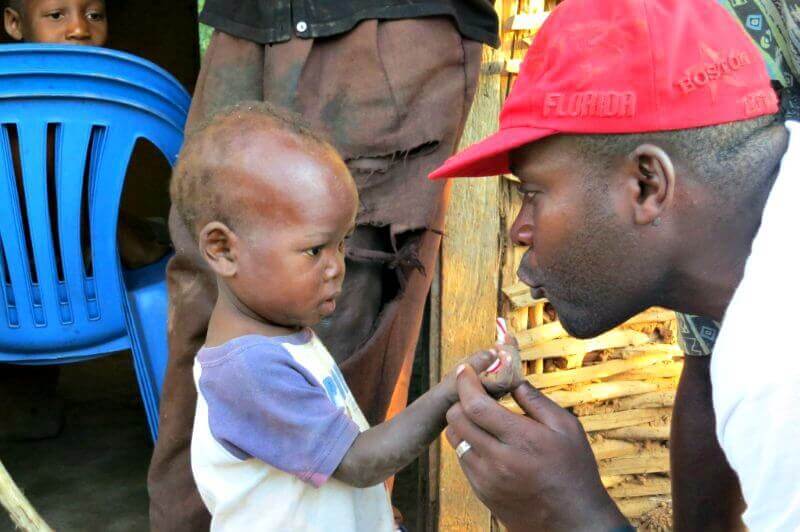 Written by Michael Gabhart. Michael’s 1st time to Haiti was 2007, this is the 2nd time.

The word to describe today would be “awe”. However, the true awe moment didn’t come until the end of our daily missions. The group started the day with the usual 8:00 AM devotions with the Many Hands staff. With this spiritual interaction built into our Haitian experience, we can ignite that fire for God and send it into the streets of Pignon each day. It almost resembles a pep talk before a game to get your teammates ready to go out there and give it everything they have.

After this time of discussion, Hank and I split from the girls and headed down the road with Claudin and Odenes. We prepared a nursery garden for a family, as well as 4 plots for them to transfer the young plants to in a few weeks. By starting in the morning, we avoided the blistering heat; however neither Hank nor I could avoid blistering hands. By noon we had finished and headed back to the dorm to have an ice cold, cherry fun bag. Soon after, the girls showed up with some bananas (quite disappointed to find out they were actually plantains). With some diapers made by the ladies at Sewing Hope, our group and Ebens headed to the roads less traveled to distribute said diapers and some “Meals from the Heartland” (packaged in Iowa).

Ebens giving a candy cane to one of the neighborhood children.

Over the next several hours, we walked door to door proclaiming the Christmas story through Ebens’s translating. The “awe” moment is coming just be patient! The connection and interaction with these desperate families became deeper and more intense the farther we wandered. Inversely proportional to the size of the connection was the size of the path (roads less traveled). I am going to fast forward to the end of the journey then backtrack to the “awe” moment.

The very last and smallest path led to one couple with 4 young children. The parents couldn’t have been older than 20 (my age). This was pretty rare to see a father figure with the mother. Often the mother and the kids will live with the grandmother once the father has left. I pictured myself in their shoes in the United States, no hope for improvement and truly the poorest of the poor. Would I be able to keep my faith and continue living life in parallel and where it seems as though time stands still? Christi kept driving home the fact that the couple had a BEAUTIFUL baby. Each time this was translated the couple smiled uncontrollably. It is amazing how one simple word could provide such joy in a young mother and father’s lives. Even though their home was no more than 100 square feet and made of sticks and mud, these parents knew they had something right in life and had something to be proud of. If you think that’s the “awe” moment, you won’t believe the real “awe” moment when you hear it.

The team meeting the neighbors. The team had lots of discussions about the birth of Jesus.

Approaching one family’s home, we began talking to the mother (probably around 40). She was very excited to see us and was very willing to hear what we had to say about the birth of Christ. (This particular family was one of the poorest families I have seen first hand in Haiti). A “rough around the edges more than anyone else I had ever seen” man appeared, he was the father (around 50) still with machete in hand, just getting back from a day of foraging. He began talking with Ebens and discussing the Christmas story, finishing Ebens’s sentences like he knew the story word for word. He and Ebens talked and talked and laughed and laughed, and Ebens would translate what they were talking about so we could be a part of the fellowship as well. As a final goodbye to each family and one last chance to give portray the awesome power of God, the group would pray for the family. However, this family was different. Instead of telling them we would like to pray for them, Ebens asked the man if there was anything specifically he would like us to pray for. Assuming it would be about providing food and material things for his family, I was wrong. The man wanted prayer for him to “show God’s love to his wife, his children, and all his neighbors.” I stood there motionless and sick to my stomach, in complete “AWE”. This man and his family have so little, and this is what he prays for? Love?

Our group’s motto is “Pray and Love Others”. If we do these things, we have the ability to be true servants of God in Haiti. This man, never having heard our moto, was living it out. He was praying and loving others. I had said earlier that this man was rough around the edges. Christi said something in our nightly reflection that each wrinkle and scar on this mans face tells an individual story. This made us think, what has this man been through? And still, through all these tough times with no signs of life improving, all he asks for is love not even for himself, but toward others around him.

Ebens having a discussion with the neighbor. Ann living out the motto, “Pray and Love Others.”

This was a sign of hope for Craig and Christi and all others trying to be God’s warriors in Haiti. God is here, and his followers are growing by the day. Hope for improvement in this life may not be present, but a hope for a better life in heaven shines brightly. Our devotion on Mondayprovided one verse that explains the hope for the Haitians around us.

1 Samuel 2:8 A (NIV)
“He raises the poor from the dust and lifts the needy from the ash heap; he seats them with the princes and has them inherit a throne of honor.”

Sunset on Christmas Eve. Who says you can’t decorate for Christmas in Haiti? The inside of the dorm, with our Christmas present – a NEW fridge!