My Hands and Feet 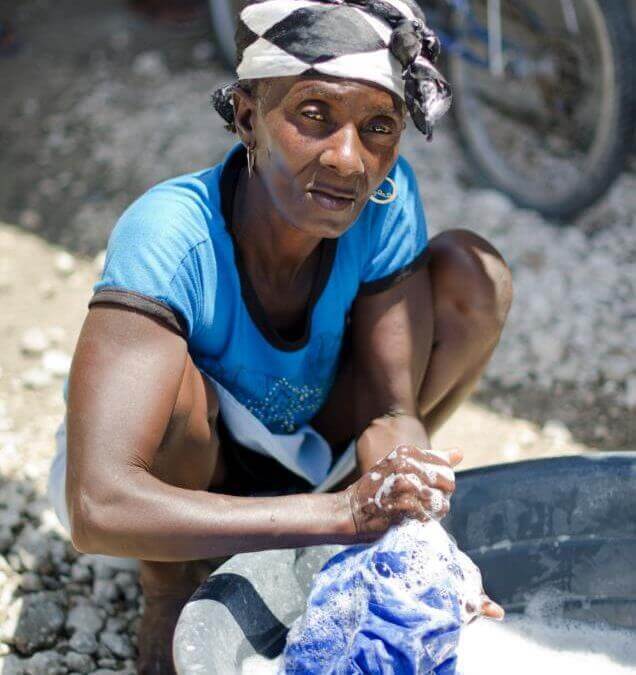 Blog is written by Bob Brice, member of Now Serving 7 band. Bob is visiting Haiti for the first time this week, at both MH4H locations in Pignon and Gonaives.

The last 24 hours have been some of the most bipolar of my life. I assume that’s the case for all of us on this trip. The highs and lows we’ve experienced have continued to reinforce some of what we’ve already concluded in our short time here: Haitians as a culture are very passionate, very patient, and very poor. We have been welcomed most often by great big smiles, waves (amongst shouts of “Blanco!”) and have been treated with incredible hospitality. As we drove on some of the most unbelievable roads yesterday for five hours in the back of a pickup truck, we still were more privileged on that uncomfortable ride than 99% of the ones we encountered along the way. Suddenly the sunburn on my legs didn’t feel quite so bad, and the bottled, safe water I casually grabbed out of the bag (instead of walking miles to pump and carry it from a “clean” water source) tasted much better than the $4.00 iced lattes I’m used to. Perspective changes rather quickly when the level of need is so abundant, overwhelming, and inescapable.
We’ve had lots of opportunities to see and be a part of things that were never on my list of things I thought I’d be doing, but have already woven themselves into my head and my heart, and I am truly blessed to be here. Even with the undeniable heat. Charlie is regularly sweating a higher volume of liquid than the shower puts out and I am not far behind. But we are still surviving. As we walked through neighborhoods today, kids here were even fascinated with how much we were sweating. Rubbing our arms and touching our skin, they were exploring how different we are from them. I was actually noticing how similar we are. At some level we all seek to understand the world around us. For them, it’s just much more primal. No Internet to look at, no television to watch, and usually no books to read. To watch the communication blossom through means other than spoken or written language was amazing. Whether through holding our hands, teaching us games they play with their hands (which I continually lost), or playing alternating rhythms on 5-gallon buckets, we were having just as much of a conversation as I have had with anyone. During one of the many times a little girl who was holding my hand took hers away to wipe it off, I briefly wondered “Is that it? Are we done with that now?” I felt God speak at that moment saying, “Will you be my hands and feet?” I quickly looked down to find a pair of beautiful eyes, a huge smile, and a completely outstretched tiny hand asking me the same thing.

Last night was pretty tough for me. With the heat, Tim and I decided to bring some cots out on the roof and sleep up there. As the hours grew late, I found myself completely restless. It surprisingly got very windy and chilly, but the level of my discomfort was less related to that and more to the complexities of my surroundings. I knew about the connection Haiti has to the practice of voodoo and the spiritual darkness that inevitably comes with it. Many have pointed out the flags as we go by indicating the presence of a witch doctor. Last night on the roof top, I felt that darkness front and center. The incessant howling of dogs, the constant crowing of roosters, the persistent cries and bleats of goats were all set to the soundtrack of the witch doctor(s) beating their drums and chanting/singing words I can only assume were spells. I grabbed my Bible and opened it (unintentionally on my part) to Matthew 4:8 where the devil takes Jesus to a very high mountain and tells him that all of the kingdoms of the world could be his if he would bow down and worship him. Jesus’ response was “Away from me, Satan! For it is written; Worship the Lord your God and serve him only.” Verse 11 says, “Then the devil left him, and angels came and attended him.” I’m not a history expert or anything close, but as I understand it the reverse of this negation took place in Haiti in 1804 where the “deal” was if the fight for independence was successful with the help of Satan, then the country itself would be dedicated to voodoo and witchcraft in return. In that moment I felt the mental collision of physical needs and spiritual needs and how the love and glory of Jesus Christ asks us to be His hands and feet in meeting both. The world would say simply that the “help” required means outside organizations with big money and big plans should come here and “show them how it’s done.” The success of that strategy and its typical omission of the true gospel of Jesus Christ speaks for itself as you see the UN Lexus’ and Land Rovers driving down the middle of the road as fast as possible, windows closed, blinders on. My time on the roof resulted in a better understanding of what it means to be the hands and feet of Jesus and I was optimistic for today (oh, and still hot).

Many Hands for Haiti is one organization that understands the need for both. The school that is set to open in Gonaives in October is founded upon the gospel of Jesus Christ. Silentor has done an amazing job helping turn this vision into a reality. The aid for physical needs is a huge part of it, and working in partnership with Haitians who are running the organization’s efforts here in Haiti, MH4H gets my vote for how true generational change begins. We had a great morning teaching music workshops to the kids from the neighborhood surrounding the school and then packing bags of rice to distribute to the neediest of those kids’ families in that neighborhood. We left on foot with bags of rice and headed out to walk to the homes, pray for the families, share and witness about Jesus, and distribute the rice (which by the way, was purchased from the local community in the same neighborhood). This is where it gets interesting…

As we walked to and through some of the poorest living conditions you can possibly imagine, Tim explained that we would be going to homes one at a time, ask questions and talk to the people, pray for them and with them, and give out the rice. At the first stop we made, we all gathered in the open area in the front of the “house.” Tim asked (via translator) “Do you know who Jesus is?” Yes. “Do you believe in Him?” Everyone is free to believe what they want to believe. As the conversation continued, Tim Brand impressed the dickens out of me. My words here do nothing to describe the testimony he gave and the conviction he had. “I want you to know that Jesus loves you, whether you are a believer or a non-believer, black or white. He loves you.” Somewhere in all of that, Charlie and I both started smelling an unusually foul smell. Then we noticed an “altar.” Then we noticed unusual objects hanging throughout. Yep, we were once again front and center with voodoo…standing in a witch doctor’s front yard talking about Jesus. I felt the presence of Jesus Christ with us, and I saw the neighbors gathering around and listening to what was going on. The overwhelming feeling I got was, “This is what it means to be my hands and feet.” Wow. I could’ve been knocked over with a feather at that point. Still quite overwhelmed, actually.

We pushed on and arrived at what were called the salt flats. Just when I thought the area couldn’t be ANY poorer, we began visiting what can only be described as huts. Made out of mud and sticks. In one in particular, the entire thing was no bigger than my son’s bedroom and was the home to SIX people. Six. One room. No more than 200 square feet. My heart just sank and I felt sick to my stomach. But guess what? The little girl holding my hand…still smiling. Through hunger, thirst, heat, dust, animal waste, and no end of need in sight in ANY direction, this girl was smiling. At me. Straight from the US in a plane with more in my carry-on bag than her entire family owns. Do I deserve all the stuff I have and all the opportunities I have because I was born in a different physical location than her? No. Do I deserve the grace and mercy the Lord gives me in my often poor stewardship of those things? No. Really, do I even deserve the smile she gives me? No. But even though that smile is almost ALL she has to give, she gave it to me without hesitation. A total stranger who looks vastly different than her. The walk we shared and the time we spent learning about each other was an investment she made in me without question. Is there a better example of how to live like Jesus?