These were written by members of the Sully Reformed Church Youth Trip to Gonaives, Haiti. This is the first trip to Haiti for most of the group.

Today has been an exciting day! From Miami to Port-au-Prince, there have been times feeling overwhelmed but it’s always fun visiting a country. When you first get to the airport, there are a lot of people everywhere wanting to help you

The team visting the village area of La Croix.

take your bags and sometimes you just have to tell them “no” just so you can take your own bags. The car rides are the most sketchy rides that I have ever been on with honking cars to passing motorcycles and people. The markets are really big with lots of people everywhere trying to sell you food or any item. It’s sometimes hard to not get anything but it’s still fun that you can get some attention there. I am excited to be working at the church here in Gonaives for the next few days. 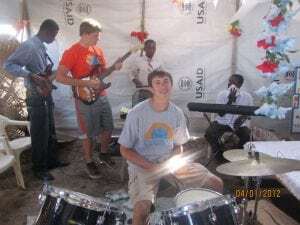 The team gets to test out the music equipment at church.

“Quite a day today. It started out like any normal Sunday I have in Iowa. Get up to the alarm, drink some coffee, and head off to Church. But it wasn’t like any Sunday since we are down in here in Haiti. Instead of the alarm, we had dualing Rosters crowing outside of our window to wake us up, instead of Folgers we had some great Haitian coffee, and finally instead of heading to our red brick church we headed to our stick church and dirt floor. Usually we go to an 1 hour and 15 minute service but today a 3 hour one. And you know what, I loved all of it mostly because of the many smiles and laughter that the people we met bring to us and each other every day. And also because of the blessings we all received from God.

We really had a great day with our team to include those of us from Sully and also our new friends to include Silentor’s family and friends. We had a chance to sing along with them at church as well as traveling out to their village. There are a lot of challenges in Haiti. But you wouldn’t know from the smiles, hand shakes, high fives, hugs, and laughter.

Playing a little soccer on the field with the kids.

So one of our planned activities this week was to build a new church, so shortly after the service the old structure came down. It was packed this morning so this afternoon we begin the process of building new one which will allow more people in and tougher for Hurricanes. Our crew dug and set 15 posts in preparation of building and will be setting trussess tommorrow. We plan to finish the roof before we leave later this week. There was army of Haitians and Iowans working together despite the fact that neither of us know many words of the others lauguage. But it didn’t stop us as we cut, built, and set poles for the new church. Our boys played the much younger Haitian kids and got schooled on how to play soccer.

Much to share when we get back. We continue to pray for saftey, everytime we are on the road, and look forward to the time for sharing tonight on the roof overlooking the city under the stars.

Look for more updates later from our crew this week.
God Bless.