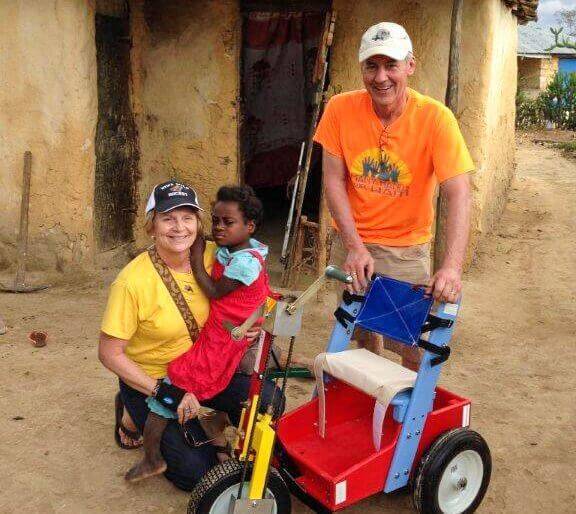 Harold and Twyla Van Wyk share the team’s full day giving out P.E.T.’s to those who need them

It was a wild & bumpy Sunday!  We started the day by going to Jean Robert’s church.  It was a small church but a lot of enthusiasm.   We sang for over an hour and the service lasted about two hours.
We than ate at a restaurant in Pignon.  There were 16 of us and we filled the room!  The menu had one item which was rice & beans and a chicken leg.  It was very good.

Praising together at church Lunch at Pt Virgule

If Marci and Henry read this, spoiler alert!  We inadvertently gave Maximo a new P.E.T. cart.  He was at church and we had the privilege to give him a new one.  His smile was from ear to ear. The team loaded P.E.T. carts, diapers, girl dresses, toy cars, food, and 15 people in 2 trucks. The roads can’t be described.  The ruts were deep and often.  We crossed a river twice, the water covered the front bumper and it’s the dry season!

Maximo was the happy recipient of a P.E.T.

It is only the third day and two Haitian men have been trained to assemble the P.E.T. carts and deliver them to the recipients.  They will be in charge of doing this after our team leaves and assist future teams. The team delivered a P.E.T. cart to a 57 year old gentleman.  He has been disabled for 7 years.  We gave out many diapers, dresses, and toy cars to neighborhood children.  They were very thrilled, the look on their faces was priceless.

P.E.T.’s give independence to people who have not been mobile for years

Duevelin with her new P.E.T.

We also delivered a stroller to a physically disabled child, John Kerry.  The parents walk approximately 7 miles to The Pignon Hospital so he can have physical therapy.  Now they can push in the stroller instead of carrying him. Words can’t explain how awesome it is to help make their lives a little easier.

On our flight from Atlanta to Fort Lauderdale this past Wednesday, Harold talked to a lady about why we were going to Haiti.  As she was ready to exit the plane, she gave him a one hundred dollar bill and said to find a use for it in Haiti.  It might be used to put a roof on a home.  A lady and her 3 children can’t get a cement floor until she has a roof.

We pray that we can be Jesus’ hands and feet.