Purity Conference: We aren’t so different

Written by Dr. Karen Cleveland, a clinical psychologist from Pella, IA, serving with the Bethel team in Haiti

Life is full of holding onto tensions created by truths in stark contrast to one another, and Haiti has been no different. The beauty of the landscape contrasted with filth in the street and buildings in disrepair. The rich and generous spirits collide with desperate physical needs and extreme poverty. The open and receptive hearts of the Haitian people opposed to the darkness and evil found in witch doctors and voodoo. And then there is the tension between our American team and those we’ve come to serve, and that which transcends culture and remains the same.

White and Black. Rich and Poor. English and Creole. These differences made my heart race and my stomach turn as I prepared to share with teenage girls on the topic of sexual purity – the first of its kind. I’ve spoken to thousands of teenagers over the years, but always Americans. Would these teens understand my quirky sense of humor? Would they sense the compassion in my heart and desire to talk with them and not at them? Or would they simply see me as an out of touch American and tune me out? As the week went on and the two conferences approached the differences faded away and the commonalities came to the forefront. I noticed teenagers flirting with one another at the soccer game, trying to catch one another’s attention with what they wore, how they stood, and other typical attention seeking tactics I’ve seen displayed in every teenage gathering in the states. I noticed girls care about their hair, their clothes, and huddle together with their friends, just like in the States. They long for affirmation and attention, especially from boys, just like in the US. And they need that longing to be met first by Jesus, just like all of us do!

Dr. Karen Cleveland, with wonderful translator Youseline, talking to the young women at the sexual purity conference. Each participant was given a purity necklace, representing God’s love for them. 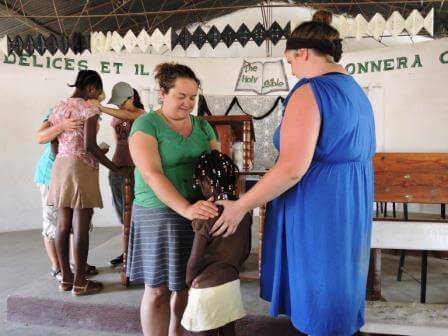 The purity conference also included prayer over the participants.

So we planned a conference. No different than we would have back home. The teenagers on the team sang a worship song. Lucia shared an object lesson on ways our hearts are broken. I shared God’s heart that they remain pure and find their identity and worth as His beloved daughters. And we prayed blessing over each young woman in attendance and gave each a necklace symbolizing Jesus’ love filling their hearts and healing any wounds. And the Holy Spirit showed up in power! American and Haitian women united in the same hurts, the same needs, and the same dreams. And as usual, though we went to bless others, I am certain we received more than we gave. And if you were wondering, yes, Haitian teenagers do laugh at the same jokes as American teenagers.

An updated picture of Eliniese, the special needs child whom we’ve arranged for physical therapy and helping with needs. The team visited today. In addition to the purity conference, the team also did more VBS activities with kids! The craft for the VBS activity. The whale made another appearance today. This whale has been sighted in multiple places across the central plateau of Haiti! Woodson helped out today at the VBS with the Sylvain kids. The shark photo op for the children. The VBS group on the land in Sylvain. This was how the team was welcomed when they walked onto the ground at Sylvain. The kids coloring their VBS activity.