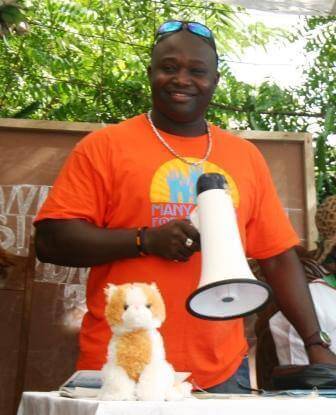 So today, we did our final VBS day during our trip here in Haiti. We both felt that it was quite an honor to be able to do the Lord’s and MH4H’s work in Savanette today. This region/town outside of Pignon is where God has led MH4H to start doing a large portion of their ministry. So to be able to help spearhead that with a VBS for the children evoked some strong feelings. We both wanted to do the best job possible because we knew that the Jezi and the community were watching us. We wanted them to learn that Many Hands for Haiti is an organization based in the doctrine of the Lord’s word and was there to help serve their community.

Zeke leading VBS. Zeke will be leading our efforts in Savanette in 2013.

Paige decided that because there were a number of coloring books with the parable of the good Samaritan translated into Kreyòl, that was going to be our story for the day. Well it’s a good thing that we packed close to a thousand crayons for this trip because when we got to the school in Savanette where we were going to be doing the vacation bible school, there were over 225 timoun, children, for VBS! A daunting task, but also it made us feel great that we would be able to reach so many kids. Zeke began by introducing everyone that was there to help for the day. Then Paige went to work reading the story as Wilkin, one of our Haitian friends, translated the story into Kreyòl. The rest of us handed out the coloring books and we could tell the little ones were excited.

After the story was finished, the children were lead into four separate classrooms so that they could color for awhile out of the sun’s oppressive heat. We had 4 boxes total and took a box to each of the classrooms to begin distributing the crayons. I was with the youngest timoun and everything was going fine until I looked and there were no more crayons left. This was to be expected, but the fact that 4 children hadn’t received crayons was not. The children were limited to two crayons a piece already. Knowing that the littlest ones had the largest group, I went over to the room Paige was in and told her what was going on. The classroom she was in was able to give three crayons to each child. So Paige asking Wilkin to translate for her explained the situation. She told them that like in the good Samaritan parable there were some other kids that needed help. It was a chance to show how they can help their neighbor. She asked if anyone would be willing to give up 1 of their crayons for the children that did not have any. The amazing thing is that Wilkin hadn’t even finished translating before a little boy’s hand started to risse with his crayons. I can’t be for certain, but this child had to be one of the youngest in the room. I looked into his eyes and there was honesty and sincerity in them. The kind of look that someone has when they are giving and expecting nothing in return for the exchange. I don’t know, because I wasn’t there, but I feel like Jesus wore a look like that on his face. The boy didn’t know if he would ever get that crayon back. He didn’t know what the other room’s crayon distribution situation was, nor did he ask. All, he knew was that there were other timoun that didn’t have crayons. To be fair several other children raised their hands with crayons after Wilkin had finished translating, and I’m sure that they all gave just as thoughtlessly and perhaps had that same look. But that boy’s look and selflessness is something that is gonna be etched in me for a long time after this trip has concluded.

A lot of times you are left to wonder ,while living in a foreign land with different beliefs, backgrounds, and languages, how much is actually getting through? Especially, when you are talking about something that at times can be so deep and rooted with such metaphors as the Bible. This is one of those times were you can sit back and see what you are saying is getting through to people. Yes, out of context, this is something as simple as one child giving another a crayon. Now, placed into context, we are in the poorest country in the Western Hemisphere. Furthermore, these kids are lucky to get pencils for school, let alone bright, colorful crayons. Further still, we live in a time and age where the global mindset is to look out for numero uno, and just based on a hunch I believe that feeling is exponentially greater in the dire, darker corners of the world. Now, let’s mull that over in our heads. How many of us can honestly say that as adults; more importantly our children or when we were children, that we or they would be willing to give up our shiny, new “crayons” that had just been given to us for a stranger we did not know? Whose circumstances we were unaware? A situation in which there was no repayment or reward tied to the terms of the transaction? Under our comparatively wealthy circumstances? As much as I like to think I would, I can’t say that 100% of the time I would make the same decision as that boy. The decision that the good Samaritan had made. The decisions that Jesus Christ made for each and every one of us as the cost of his own life…

The rest of the day was full of fun games, contests, and questions based on the story of the day for prizes. Each room had a coloring contest in which the top 5 pictures won a prize. There were even rice sack and egg on a spoon races! The kids laughed and played throughout the day. Several songs were sang for us as well. The little children danced to music played for them. A feast of chicken, rice, and beans was given to all the children. Followed by cups overflowing with tasty juice. Overall, it was very similar to what VBS would be like in the US; a message, fun, games, food, and prizes.

Afterwards, Zeke had several children volunteer to help us clean up the plates and trash. We packed up our things and got in the truck. Everyone was exhausted from the day. But the whole ride back I thought to myself, what are my “crayons” and that in the future I hope and pray I will be willing to give them up like that boy, the good Samaritan, and Jesus; for people I may not even know…