So, today was only our second day in Haiti, and I feel like I’ve been here for a week already. Maybe it’s the heat, maybe its culture shock, but either way, time seems to have a different definition here.  I woke early, before daylight actually, due to the energetic and enthusiastic rooster outside my window. Apparently he was never told he is to crow at daybreak and not before.

An excellent breakfast fueled our team for the day thanks to our wonderful cooks, Beatrice and Evnee. We loaded up with backpacks, water bottles, and gloves, and piled into the back of the truck. After a ride, which can be described in one word as adrenaline inducing, we arrived at the small tin-roofed house of a man and wife and their three young boys. We were there to help them put a cement floor in their house. All of their possessions in the world were stockpiled against the back of the house. It was a very small pile. But they were happy, friendly, welcoming to all of us. We held a short devotional about building a house on the foundation of Jesus. After prayer and the song about building your house upon the rock we started work. Some locals helped too, and the owner worked harder than all of us. We formed a bucket brigade through the house and took turns helping out at various “stations” until the floor was complete. It was a beautiful floor. The owner’s face was a blend of gratitude, peace, and thankfulness.

The team and workers, praying and doing devotions before beginning on the cement floor. Burns, the MH4H Construction Coordinator, helped create this cement floor.

One of our team members, Alicia, had her sandals completely caked with cement mix during the process. An elderly woman, a neighbor of the family, took her by the hand and led her around the corner of the house to find some water. She collected a bowl and a water jug, filled the bowl, and proceeded to take the sandals off of Alicia, and washed her feet. When Alicia tried to do it herself, she gently but insistently shook her hands away and completed her act of service. Then the woman gave Alicia her own shoes to put on while she washed Alicia’s sandals. I stayed in the background taking pictures of this, but knowing without a doubt this image would be graven on my heart forever.  I can’t remember ever in my life, anywhere in the states, seeing such a profound and meaningful act of service and love. My heart was overwhelmingly humbled while my mind reeled with the realization that the people I had come here to help and serve and love, were instead, the ones that were serving and blessing me.  All I could think of was Jesus washing his disciples feet and when that woman turned and smiled at me, I saw Jesus.

The rest of our day was very full. Lunch back at the dorm, a quick clean up, practice skit session, another thrilling truck ride, to hold a VBS for a group of 50 kids at Appollons place in an outdoor gazebo and large clearing. We performed the skit of Jonah complete with a burlap boat and large whale. Stations were set up for the kids to color pages, play with bubbles, hula hoops, jump ropes, have their fingernails painted and snacks handed out to all of them. It was a chaotic jumble of noise, fun, confusion, and praise. The children are even more beautiful up close and personal than through the flat image of a TV screen. Some give shy smiles from behind their mother’s skirts while others are eager to hold our hands and talk.

The children all lining up for the VBS. The boat for Jonah and the Whale story, as recreated by the team. The whale, as done in the skit for VBS by the Bethel team. 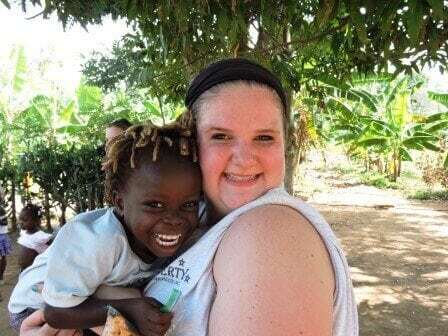 The children are even more beautiful in person.

More pictures from VBS! We also took pictures of the children in the whale!

We had an early supper, a quick wash-up and out we went again, this time for a scenic hike over a swinging bridge. Feeling brave after successfully crossing it on foot, we were treated to the amazing sight of a man on a motorcycle cross over, complete with children clinging to him, belongings piled high on the back and live chickens actually trussed up and hanging from the handlebars. “Toto, we are not in Kansas anymore!”

On the suspension bridge just outside of Sylvain.

Our final stop was to the hospital to sing and pray over patients. So sad to see so many patients packed into rooms together, and many more in beds line the hallways.  Many children and elderly patients but all with many family members gathered around them.

I am more tired today than I can remember being in a long time, but it’s a good kind of tired. I don’t know if I will sleep with the images and remembrances of today on my mind, but I also know I will experience many more heart wrenching moments in the remainder of our time here. My expectations have already been far surpassed because I saw Jesus today. My prayer is that everyone, every day, can look at me and say the same.