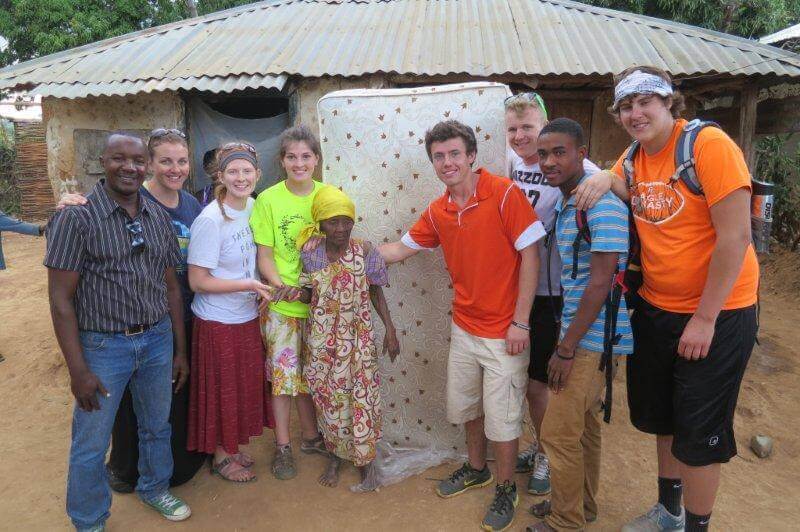 Simplicity. I could not think of a better word to describe today’s tasks, emotions, and gifts. I have sat here for the past 20 minutes staring at a blank page trying to reflect on the day and a common theme that I noticed, and I guess I am making things too complex. In reality it is simple.

We started our day out at Thrive; a program that Many Hands has worked on organizing for years. Thrive helps provide food and other necessities to mothers with young children. We started out with getting simple supplies (rice, beans, and oil) and bringing it to the distribution location.  Once the women and children got checked into Thrive, we accessed the kids by weighing and measuring them, to ensure that they are eating properly. Then we performed our skit of the story of Moses for the women and children. In all honesty I was kind of worried, at first, if the young infants would even understand, and if the mothers would get bored of our skit. Turns out the mothers laughed harder and listened more than all the kids we have performed for this past week. They were so attentive to the skit and our bad acting. After we performed, we handed out food and some small toys to the children. I was so impressed with the mothers’ ability to carry a 15lb bag of rice on their head, hold a child on their hip, and carry a gallon jug of oil and beans in their free hand.

After lunch we went to a small market in Pignon to do some souvenir shopping. There was really cool stuff to buy, but it involved some bartering to get a fair price. Every market clerk thought I was their best friend and would come up to me and grab me by the arm, and then they would be really nice and call me Mrs. …. what they don’t know is that I am not married. Haha. Although my favorite part of being in the market was when I talked to some Haitian kids my age. It’s really cool to be able to talk to them because a lot of teenagers down here can speak Spanish and English (two languages that I am pretty fluent at). The Haitian teenagers also love talking to us because it is good practice for them to use their English. Sometimes the simplest actions like having conversations can make a difference in their education and can even turn into a friendship.

Later in the afternoon we did some more food distributions in another part of Pignon. Our first stop started out pretty normal, we gave the family some food and then prayed a blessing over them, but as I was walking out one of the family members stopped me and showed me their child’s foot. This young boy had burned it badly. I knew burns are pretty normal for children, because of the open fires they cook on, but as I got closer to examine his foot the severity of the burn looked worse. His foot was swollen and infected. If this family had a little of antibiotic ointment and some basic cleaning equipment at the time of injury, this painful burn could have been healed in no time. Nurse Lucia decided we needed to take him to get some medical care, so we did just that.

One of our next stops was at an old woman’s house. Some of the civilians around her said she was 110, but I don’t know if they were telling the full truth. Anyway, she was at the point she probably has lost track of how many birthdays she has even had. When we handed her food she was so happy and joyful. The smile revealed on her face was priceless. The old women let us peek into her house and showed us her bed. Right inside the front door laid a cloth mat and a small pile of clothes. To think this woman has been pretty much sleeping on the dirt floor for who knows how many years broke our hearts. So we took action, and together decided to buy a bed for her that has been long deserved. One group went to get the bed and the other quickly finished distributing food and other supplies then returned to the woman’s house. When we dropped the bed off the woman’s eyes began to glimmer, in shock of her very own, new bed.

It is simple things that make a difference, and to think that the smallest of things like talking to someone, medical supplies, or even a bed can make such a difference for some ones life. It is hard for Americans, like myself, to comprehend how simple tools, God has blessed, can make a difference in a place such as Haiti. I hope when I go home I don’t loose this perspective of simplicity, I was shown today.

My mind is running a million miles an hour today, as I am sitting here at midnight trying to process the week and another day in here. As it’s my first experience in Haiti, I am overwhelmed with the sites I have seen.

The first part of our day was spent at a Thrive Program, where mothers and their infant children come to gather food distributions for their sponsored kids, and take their height and weight. I was in charge of helping to gather the kids’ height and weight. Specifically I was taking an updated picture of the children. As I was taking pictures, I noticed the life in these kids. I noticed how precious each and every one of them were. I noticed the children were lovable, capable, and able. Seeing pictures of them, does not do the child justice in realizing how uniquely made they are. I felt as if, by taking a picture of them holding a number, we were itemizing these children, and my heart broke. Before when I would look at a picture of a child, I would just look at how cute they were. I can tell you though, that was my first instinct. I was convicted. When you look at these kids as equals, as brothers and sisters, it’s in that moment where your heart turns from torn into shattered. My heart was shattered today.

I can’t stop thinking and getting past the physical needs that are not met everyday in this country. I walk through town, and I am overwhelmed with the intensity of the poverty. The perspective of being overwhelmed brought joy to my heart, when my friend reminded me, that in this moment the physical poverty is not our main focus. It’s the spiritual salvation of the people we are concerned about, and my hope was restored as God revealed to me, the people of Haiti love God in vastly different ways than I do. As I am shown the special love by the Haitians, my heart becomes warm, because of the amount of love they are able to give. One of the biggest things I have realized and felt, especially today, was that physical touch (hugs, kisses, and closeness) is not at all in poverty in Haiti. The amount of love that is shared between the people is immense and joy filled.

The connections I have with the boys who hang around our dormitory are incredible. There is a crew of boys who are around 8 – 12 years old that have so much energy, and they are filled with true joy, even though most of them are living in intense situations. Most of them have either lost one parent or both parents. As a young man and looking back at my childhood, I remembered being their age and thinking my parents were superheroes. I’m learning what it is to be a man from my father. My heart shatters because who is the person in these kids’ lives, to show them how to be a man, and what being “a man after God’s own heart” really means? As I looked at these kids, I prayed to God, asking that he would show them what a real man looks like and acts like, a man who stands for the broken and speaks to the silent. And as I looked at these children’s actions I could see the seeds of God’s work, being planted inside their hearts.

Writing these blogs is difficult, because honestly, with the amount of events that have happened today, it’s hard to tell in detail what has happened, and do the details justice. The stories coming from today are stories that are works of God and have Jesus written all over them. I can tell you as the trip is coming to a close, I can say the works of God have been more and more evident. It is only by the grace of God that I am able to say, the Holy Spirit is working in the hearts of the Haitians and in the hearts of my friends on the trip.