Within every great story, there is a moment when the hero has an opportunity to fold, to lay down the sword, and give up. Typically, they’ve gone through some great struggle and they have a choice to make – move forward or quit. During this time of great discernment, a foretelling word is spoken by a friend, a mentor, or a recalled memory, drives the hero forward to walk through the fire in their life to the glorious destiny awaiting them on the other side. In August 2015, I was petrified with fear, unable to overcome this overwhelming feeling in my life. One song, spoken with prophetic truth to me, gave me the courage to move forward, “No Longer Slaves” by Jonathan David and Melissa Helser.

“I was told to stay out of the country…as there were threats against me.”

On September 30, 2014, I went through one of the most traumatic experiences of my short life. We had been betrayed in the worst way in Haiti, losing all of the ministry in Haiti that God had birthed to date through Many Hands, and we were threatened by a mob of people in the village in which we worked. We left on October 1st, under protection from some local people and flew home, bewildered and shocked at what we had just experienced. A month later, the and the Van went back into Haiti to re-establish relationships and determine the course of action moving forward. I was told by multiple people to stay out of the country, being the head of Many Hands, as there were threats against me. Scare tactics were very prevalent during this period, especially towards me and our staff in Haiti, as those who opposed our work wanted us gone. The heroes of the day were the Craig and Christi, Ebens, Appolon, Claudin, and Odenis, who lived through some unnerving times in Haiti for the sake of Christ. Without them being the first ones to stand in the darkness, I’m not sure we rebuild back. I’m forever grateful for their courage, as they showed me a way forward. 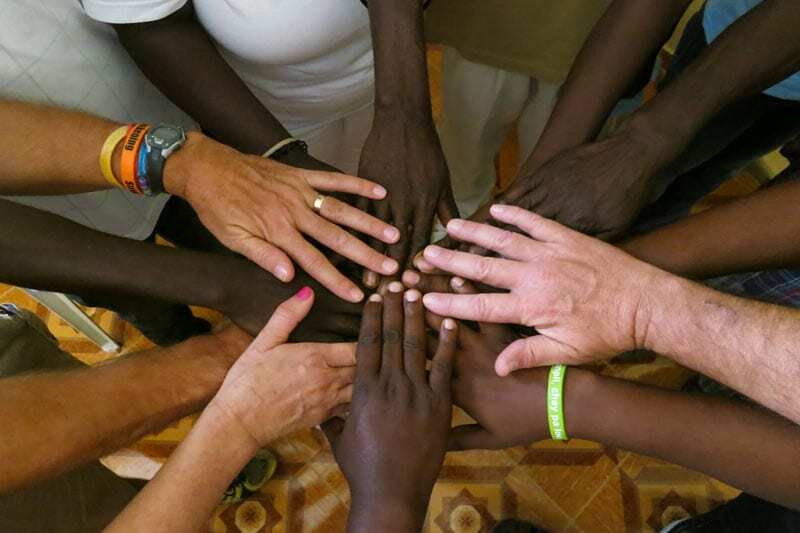 Repeatedly, I had it on my schedule to come back to Haiti and repeatedly, I was told by people in the know to stay away. For nine months, this was the pattern, and during this time, the fear had found a foothold in my soul. I wanted to go back, but fear continued to dominate my decision-making. Then, in 2015, I attended the Global Leadership Summit and they played a song, touching the deepest part of my soul, “No Longer Slaves (to fear).” I came home and immediately downloaded the song, as I clung to the words. Music has always played a central role in my story, so it is no surprise to me God talked to me through this song. Over the course of the next few months, I played this song again and again, letting the words pierce the scab of fear that had formed over my wound and speak truth back into my inmost being, beginning the early stages of necessary healing.

Then, in October 2015, it became clear I was to take my first trip back to Haiti. I didn’t know what was to come during that trip, but it was a real fear of going back. I remember laying on my bed, listening to this song, praying to God to protect me, with tears rolling down my face. God gave me a peace to move forward and He used this song to move me. Thank God He did, as I had to face my fear and get back into Haiti.

“I am no longer a slave to fear for I am a child of God.“

After the October 2015 trip, we were set to launch our first Servant-Hearted Leadership Conference, with 100 Haitian Leaders from 10 different communities, in January 2016. I was going to lead one of the sessions and I knew right away the words God wanted me to deliver to the Haitian leaders: To no longer live in fear, for we are children of God. In January 2016, I gave my talk and shared with the leaders about no longer living in fear. It was a wonderful time of fellowship and for sure, I felt the power of the Spirit working through my words. 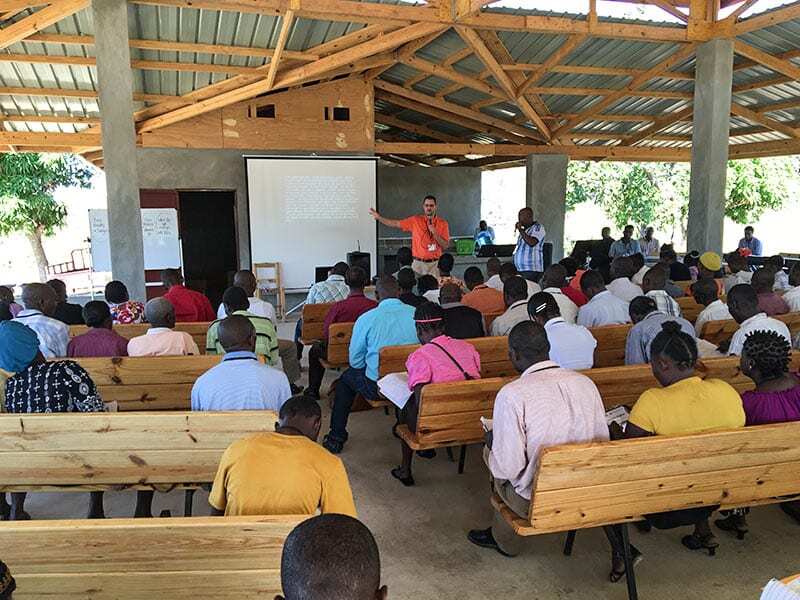 At the end of the talk, we did two things to seal the learning. These images are eternally burned into my memory and have served as a building block for our future. First, we had ten leaders from the community of Savanette, the community who rioted and forced us out in 2014, come to the conference. Since that wicked day in September 2014, they had realized they were lied to by one community leader and they were remorseful. I called them up to the front, we prayed together, and I asked them to forgive me and my American pride and selfishness, resulting in the blow-up in their community. I told them I would trust them again and would prove it by doing a trust fall into their arms. They caught me and all rejoiced, witnessing Christian reconciliation.

Tim’s trust fall with the leaders from Savanette, 2016

Second, after the trust fall, our staff taught them a new song in Creole, “No Longer Slaves.” It immediately became a favorite of the group. To hear 100 Haitian leaders singing the lyrics “I am no longer a slave to fear for I am a child of God” at the top of their lungs, and witnessing the freedom welling up in them, is something I will never forget. It was an image God gave me in my head in August 2015 when I first heard the song and He fulfilled it in front of my eyes. Every story has a beginning and this one is remarkable. I came across a video in which Ken Hesler, the songwriter’s father, tells the history behind the song. To know that this incredible story intersects with our incredible story brings me to tears. The Holy Spirit is alive and it is actively moving, connecting parts of the body together for His glory. I’m in awe of the King of Kings using any part of me for His plan.

Many Hands for Haiti stands on the shoulders of prophetic words written in the song, “No Longer Slaves,” that give courage to those in need to live in freedom and to put to death the fear inside. This song has now washed over millions of people, all over the world, including our village in the Central Plateau of Haiti. Just like the song states: God splits the sea so we can walk right through it. Our fears are drowned in His perfect love. He rescued us and we will stand and say, we are children of God.