The final days of the Spencer Hope Church team finds them continuing to meet the needs of the poor and finding out more about Haiti’s rich history
This was the hottest day so far, but we still got a lot done!
Jerry and Scott finished the privacy/sound barrier above Craig and Christi’s apartment, filling in the gap between the ceiling and the top of the walls.  Calista, Sharon, Shelly, Mercy, and Kurt painted up a storm, getting a lot of the trim work done on the smaller buildings on the compound.  Emily, Carli and Maddie worked with the kids in the Thrive for Five program, serving children under the age of 5 and their mothers.  Today while the kids played, the mothers received some health education.  Cindy, Kurt, Scott, Jerry and Jeff went and helped pour another cement floor, too!
After lunch, we loaded two trucks with food and clothing to distribute, 12 missionaries and one goat!  We went to the town of Savanette, where Heather had established the first Thrive program during her year in Haiti.  Even though she left over 18 months ago, those kids sure remembered her!  Around 130 kids and their mothers turned out for a party, showing up at 11:00 when the party was scheduled to start at 1:30.
Handing out gifts to the kids
Each child received a package of cookies, a sucker, a glass of juice, a toothbrush and toothpaste.  The girls each received a pillow case dress, and each boy received a wooden car…both items handmade and donated back in Iowa.  So much love connecting Iowa and Haiti!  On the map, it’s a great distance between the two…but as sisters and brothers in Christ, it doesn’t feel quite so far apart.  Heather said it was such a blessing to see that the seeds she had planted were indeed thriving!
While the team was at the party, the goat (another donation!) was delivered to her new home!  Another family blessed!  Praise God!
When we left the party, we stopped at the houses of three more families, delivering food and clothing.  Two of the kids are sponsored by Rick and Karmen Brown, so it was extra special to visit them.

Karmen and her sponsor child Guerline Karmen and Heather with the Brown sponsor child LenslyOne 3-year old girl has very bowed legs, so Jeff examined her and took some photos.  Plans are being made to get her the medical attention she needs to correct the issue before she is crippled permanently.   In addition to the food and clothing Karmen brought to her, she also received a doll that Hannah Thurman had made!  Another very personal connection between Haiti and Iowa!

Jeff examines Guerline’s leg condition
The following day started at 5:00am for Christi and the Newbies!  Christi led a group of first-time visitors to Haiti, as well as a group of Haitians, to visit the Citadel, a fortress built by King Christophe, to keep the French from invading.  None of the Haitians with us had visited it before, so it was very educational for all of us!  The fortress was huge, with cannons aimed in every direction, with stacks and stacks of cannon balls at the ready!  But, the invasion never came.  Not a shot was fired, ever. 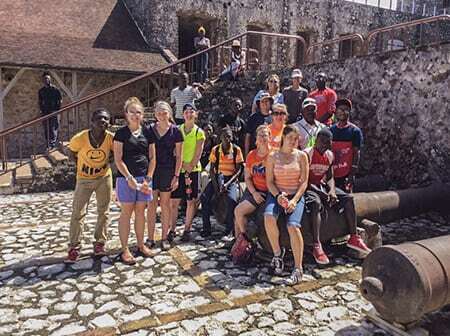 We also toured the palaces of King Christophe and Queen Marie-Louise.  There was a fountain, a swimming pool, and one of 15 original statues still standing.  The tree that stood next to the palace was where the king hung criminals and anyone accused of treason.  Both the Citadel and the palaces had a very elaborate aqueduct system, making water available wherever needed, including the king’s flush toilet!  The trip to and from the Citadel is 35 miles one way, and takes 2 1/2 hours!  The road is lined with banana and mango trees, as well as quaint villages and mud huts.  It was a fun day, and it was very interesting to learn a bit about Haiti’s history.
Christi and Kenzie find treasures!
Next morning, our final day, we loaded up the trucks  and headed to Guimby School.  Before we left, we would have told you that we’ve been on lots of roller coasters and thrill rides.  Compared to the road to Guimby, we have never been on a scarier, wilder ride in our lives!  We had just enough rain last night to make some spots in the road a muddy, sloppy mess!  Add that to a road that is basically rocks and ruts anyway, and you have the makings of a very exciting/terrifying ride!  When we got to Guimby, we passed out juice and snacks, and gave each student a drawstring bag with a new plate and spoon for them.  We measured and weighed about 50 kids, recording their growth and took new picture of them to send to their sponsors. Then we presented Bibles to the 5th graders.  Emily, Carli and Maddie spoke, telling them how excited they had been when they received their Bibles, and encouraged them to read and keep The Word in their hearts.  We gave each teacher a Bible and prayed with them, and for them.
Giving bags to children at Guimby School
After lunch, we visited two more families, bringing them food and clothing.  One of the families had suffered a terrible fire, losing their home and a child, as well as horrible burns on the mother and father.  Many Hands 4 Haiti built them a new home, and checks on them periodically.  The mother was very grateful for the food, and thanked God for the blessings He sent.
After supper tonight, we had another meaningful devotions time, led by Heather.  We shared our “Happys and Crappys”…the highlights of the week, as well as the things we wish could have been different.  And because it is Ash Wednesday, we celebrated communion.  Cindy led the worship, we sang, and Sharon and Karmen served the elements to the team.  It was a precious time for us, and a wonderful way to close out our week in Haiti.  We came together as friends, we worked together as a team, but we go home as family.
We have all been safe and healthy…we do have sore backsides from riding in the trucks on the Haitian roads, but all is good here.  Thank you for your continued prayer support. Please continue to pray for us…for safe travels and good health as we return to Iowa on Friday!
We have been doing devotions every evening as a team, and quite often in the morning, as well.  It is amazing how perfectly the themes have been for our team and this trip. God knew long before we did, that we would be going on this trip, and He knew exactly the encouragement, and reminders of His sovereignty we would need.  Thank you, Jesus!  Thank you, Jesus!