Stepping Out Of Our Comfort Zone 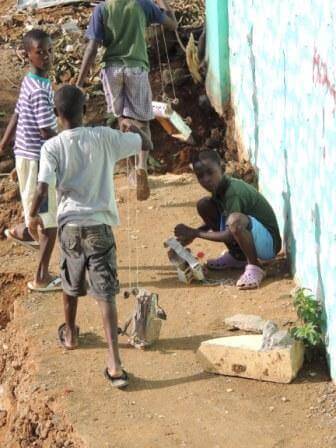 This is written by  Summer Brand, 11 years old and currently in Pignon, Haiti with her family. (Steve & Robin, Kaleb (11), Nolan (11) and Kameron (8). Grandpa and Grandma  are there as well (Bev & Denny Brand)) This is Summer’s first time traveling outside of the USA.

The River in Pignon

Today was our second day in Haiti.  My name is Summer and I am 11 years old.  We started out the day by a peaceful walk to the river.  When we got to the river, we saw people washing their clothes and taking baths.  It was all women and children, except for one man.  The man spoke very good English and explained to us that to get spaghetti, he had to wash his wife’s clothes!   We saw a big truck in the river.  They were collecting water in garbage cans to sell.  There were also pigs that were sleeping alongside the river, or bathing in the river.  One lady went to the river and collected about 5 gallons of water in a container, then balanced it on her head.  We watched her walk all the way up a long, steep and bumpy hill.  It was incredible.  Up on the hill, on the opposite side of the river, there was a witch doctor’s house.  That was a new learning experience for me.

Next, as we were headed to the hospital, we stopped at a small, dark building that was made out of sticks and straw.  It was a rum factory.  I left immediately because it smelled really bad!  At the factory, we met a little boy, about 4 or 5.  He was wearing only a shirt (which is not uncommon for kids this age here).  His only toy was a small, worn out bike tire and a stick.  He showed us how he could push the tire down the dirt track with only the stick and it never fell over.  He laughed and smiled while he showed off for us!

At the hospital, we started at the first floor.  The first floor is for people who can’t pay.  There were people everywhere.  When someone in your family gets sick here, then the whole family goes to the hospital.  The patient sleeps on the bed and the family sleeps underneath the bed.  The shower is just a faucet and some buckets outside.  There were no toilets.

After visiting some of the patients, we went to look at where they make prosthetic legs and feet.  While we were there, we looked at their physical therapy room.  Before they go home, they are required to walk in between two rails and balance without touching the rails.  Then they are allowed to go home.

My Aunt and Uncle in front of the school they helped build in 2007.

Our main outing for the day was a forty-five minute truck ride to Salt and Light school. My grandparents and aunt and uncle built that school for kids who weren’t going to school because the school was too far away.  The truck ride was very bumpy with a lot of twists and turns.  We almost ran into three donkeys carrying either sugar cane or water!  There was also a river we drove across.  When we got to Salt and Light, we gathered our painting supplies and painted four out of the seven total rooms.  While we were painting, kids came from all over and were interested in what we were doing.  After we were done, you could see a lot of improvement. Before we started painting, the walls were all dirty and really needed painted.  It would be hard for me to learn in these rooms with only stone walls, wooden benches and one small chalkboard.  I think I would just want to go outside and play.

Some of the friends we met along the way to the school.

On the truck ride back, we stopped at a girl’s house.  It was the girl that our family sponsors to go to Salt and Light.  When we got out, we gave her some gifts (a jump rope, nail polish and ponytail holders).  There were seven kids in her family, they all lived in a one room house that was tiny.  She was the only one that looked kind of well fed.  The others all had an orangish tint in their hair.   Grandma said this was a sign of malnutrition.  I really wish that we could have fed them all or sent them all to school, where they could get at least one meal a day.  We also helped the grandpa who had a very bad infection in his leg.  Grandma had a first aide kit so we left them some things to help him.  He was so happy he wanted to give us a chicken but he didn’t have one to give us right now!

My experience in Haiti so far has taught me that there is so much that needs to be done for so many people everyday.  We always need to be ready to be the one to step out of our comfort zone and help out, even under some very difficult circumstances.