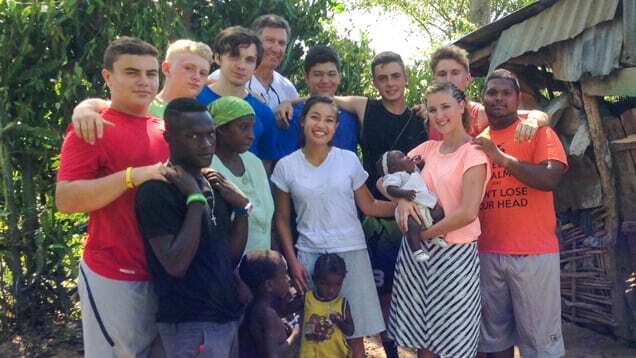 As the Tarrytown team continue their work, Owen Steele explains how working with meaning and purpose has encouraged the team.

Today was an interesting if surprisingly difficult day. It started out easy enough with the group, for the first time on this mission trip, being able to awake both naturally and relatively late the morning still with plenty of time to attend worship at nine. We all wore our Sunday best, but were surprised when we arrived to find the place of worship was actually just a simple roof with some movable pews and chairs put underneath. Undeterred, the congregation still arrived in a timely fashion. We listened to the Pastor speak of how the disciples allowed Gentiles into the community of Christ, and of Jesus speaking to the disciples about the importance of bringing little children into the church.

Halfway through our group was called upon to preform “Amazing Grace”, which we had practiced the night before. It wasn’t apparent immediately that the congregation understood the words but, the local music leader took the initiative and pointed everyone to the French version of the song afterwards. Later, near the end of church, we had the opportunity to sing “Go Now in Peace”. This time, someone was able to translate what we were saying between the verses so that the people could understand what we were saying in real time. A highlight of the worship was when a local man played a homemade instrument that seemed to be conglomerated out of the traffic cones, metal cans and wire. It did not mater though because he played it well and with a happy heart. After worship, we had lunch at a local restaurant and then went to deliver food.

The team eating lunch at a local resturant

We used the food we had bought the first day and evenly distributed food for the five deliveries we would be making that day. The first house we visited, as it turned out, belonged to none other than our friend with the homemade instrument. Though, it was certainly unlike any home I had ever seen. It was a one room shack with walls made of interwoven sticks and mud with a roof of a single, large, slanted metal sheet and a floor of dirt. I was afraid to touch any part of the walls for fear that it would crumble away. We were greeted by his wife, who explained that her husband was out in the fields, and three of his children including a small baby who was especially adorable. A volunteer was asked to share a word and for a horrifying second I thought I would have to. Thankfully, Juliet volunteered, she spoke of God’s love which was translated to the wife. Once the food was given we prayed together led by Pastor Jeff and sang “Go Now in Peace” for the family before we departed.

We did this same process with each family we visited, with the owner first giving a basic introduction as to who they were and how many kids they had, then someone speaking, us giving the food, praying and then singing to the family before we moved on. On the second to last house we visited I thought that Juliet deserved a break so I volunteered to speak. I had a reasonably coherent and hopeful short speech in my head that I was sure would carry over well. Then I learned that the father had died Monday. He left a widow and seven children including two grandchildren. What could I possibly have to say to this woman? How could I make the argument that she and her family were still in God’s embrace? The speech was decent if a bit disjointed with multiple reference to how the departed husband was a good man and was currently in heaven. One thing that stuck out though, was the quiet dignity in the mother. As though she already knew what was being said was true. She wasn’t bitter or angry or despondent, she was there for her children secure in the knowledge of God.

We then went off to the final house. There was a father and two sick boys of eleven though they looked younger. After we had given them food and begun to sing, the two boys joined us. One, red-rimed eyes, emaciated arms and all, tried to sing along. To connect with us. It was amazing to see a child in such a state make the effort for complete strangers, many of whom he would never see again.

With food distribution completed we headed down to the local orphanage. Once there we broke off into two groups with several of the boys going to play basketball with some of the orphan boys and the rest moving on to the main building to listen to the director there. She talked about their goals of keeping kids until their twenties so they can be let into the world as high functioning, Christian adults. We saw what looked to be a child no older than a year who turned out to be two years old and horribly malnourished. We learned of her mentally disabled mother who was having another child. We learned of how they had been trying to get her to eat a spoonful of peanut butter for the past 2 hours. We also learned of how the kids in the orphanage had running water, electricity and an education. After the introduction we split off to mingle with the children and I quickly found myself playing frisbee with a variety of kids for a good hour and a half. The other mission members likewise divided themselves, playing hide and seek, soccer and basketball. Near the end of the evening, Jack Stoner and I found ourselves giving what seemed to be endless piggyback rides to the kids until we had to depart. Some asked us not to leave but, we had too leave nonetheless.

Our group returned to the compound far more exhausted then when we made cement floors or even did agronomy. Later that evening we met for the second time as a group. There, Pastor Jeff talked about how the work we did differed from our group’s normal physical work. In a real way, our work that day was more emotional and spiritual then our normal responsibilities. Juliette then talked about her own feelings of a “spiritual back and forth”. It was then I understood why the day had been so difficult for me. Doing physical work, while taxing on the body, allowed me to project a mental self image that was very comforting. That of an efficient working machine that is useful and goes on with out complaint. A finished product.

The Tarrytown team with a family

That day I had allow myself to be emotionally affected and inspired by the people I met. I had to recognize that not only was I an unfinished product but, that in order to grow I needed help from other people and from God. As Pastor Jeff pointed out the motto of Many Hands for Haiti is “transforming together in a broken world”. That day we learned that the transforming went both ways.