The Best Saturday, May 24th That We’ve Ever Had in Haiti 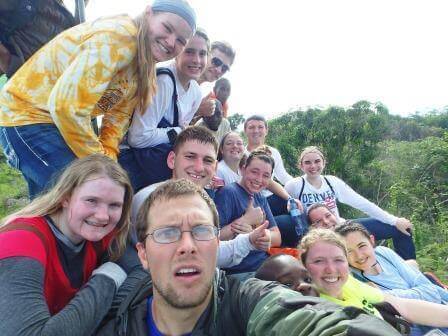 Written by Josh DeWaard, Alex Koolmees and Katie Roling aka the coolest people you will ever meet

Today we climbed Mount Everest. Ok, it wasn’t really Mount Everest, but it sure felt like it. 16 of us plus a few Haitian guides (most of them under the age of 12) took the trek up Mount Pignon. The American crew wore jeans, long-sleeve shirts, and sturdy shoes. We needed to rest about every 5 minutes. Katie Roling summed up our hike well with this quote, “We were literally dying up the mountain.” If you saw us you would have thought it rained, but no, it was just sweat. Our young Haitian friends however, literally did not break a sweat the whole way up the mountain. They were running, jumping out of bushes, and having the time of their lives while in bare feet or Crocs. Meanwhile, us Americans were praying to Jesus to give us the strength to continue on. Our favorite phrase while going up the mountain was, “we will be there in 10 Haitian units and a bit.” What? What is a Haitian unit? We don’t know either. After 10 Haitian units (probably an hour and a half plus 30 minutes of break time), we finally made it to the top of Mount Everest….err… Mount Pignon. The view was well worth it. We feel extremely blessed to have been able to see so much of God’s beautiful creation.

Our 6 climbing assistants – aren’t they cute? Our view from the top.

Here is us doing our best “Oscar Selfie” on top of the mountain.

After the adventure of climbing the mountain, we visited two of our new friends staying at the MH4H compound in Pignon. They are two American missionaries from Iowa who have been living here in Haiti for about a year now. We got to their house, drank most of their water, and sat down only to be told that we had to get right back up to experience some Haitian culture: the market. It is hard to describe, but luckily Josh just came up with a wonderful metaphor to sum it up. “It is like we were baby ducklings walking through Times Square on New Year’s Eve.” Well said, Josh. The best part was when we saw the goats’ heads sitting in a tub to be sold. By the way, if any of you want us to bring you back an ox, we can for the low price of 250 American dollars! Wow! What a deal. Let us know…

Next, Tim wanted all of us to see the Saturday washing craze. On Saturday, the river is hoppin’. It is the place to be. Anyone who’s anyone is at the river. Okay just kidding, but really it was busy. Many Haitians went there to bathe, wash clothes, and retrieve buckets of water. We were amazed how so many people were able to balance tubs containing gallons of water on their heads up such a steep path. We were having a difficult time with it, and we didn’t even have anything heavy to carry.

The third stop on our cultural tour of Pignon was the sewing center. The sewing center was built last year by Haitians but with the help of the previous year’s Central team. Every 3 to 4 months, ten women in the community are taught about sewing, cooking, and the Bible. We got the chance to meet the most recent graduates of the program. We were able to hear each of their stories. They all expressed their gratitude for being able to learn, and they even sang a song. Before we left, we got the opportunity to pray for them. We prayed for God to bless them and their families. We would appreciate it if you prayed for them as well.

A few of the super cute kiddos at the sewing center.

At this point in the day, it is safe to say that we were all pretty exhausted. Our legs felt like jello, and we couldn’t stop yawning. But we knew that experiencing Haiti is kind of a once in a lifetime opportunity, so we tried to forget how tired we were because it was time for us to buy some souvenirs! This mini market was set up outside of the MH4H compound in Pignon specifically for us. Thankfully, it was a lot less crazy than the other market. The Haitian women that were selling their goods were very determined to make us buy everything. “My friend, my friend, I give you good price.” “Sister, come look at my stuff.” “Brother, come, come. Buy.” “Look and choose. Look and choose.” At first it was kind of awkward to say no to them, but we quickly realized that if we weren’t firm with them, they wouldn’t leave us alone, and we would probably end up walking out with the entire market and no money left for college.

This is Alexander, a local Haitian artist.

It was a long but rewarding morning. After buying aprons, paintings, bracelets, globes, key chains, hats, and bags, we came back to the compound in Savanette. We immediately ate lunch. By the way, it was like 3:45, so we ate a late lunch. It’s okay though because we are on Haitian time. The rest of the afternoon was filled with naps, although there were some who attempted to stay awake during Jungle UNO. But apparently they took naps between rounds, so they are all rested up too. Then we had dinner and capped off the night watching Spiderman in French with adorable Haitian children. Always remember, with great power comes great responsibility…

Another view from the mountain. One of our climbing assistants grabbed a mango to eat. 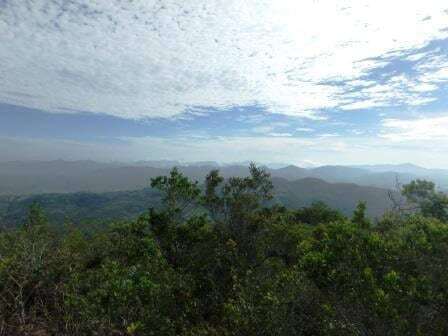 Another view from the mountain.