These Little Ones – Part 2 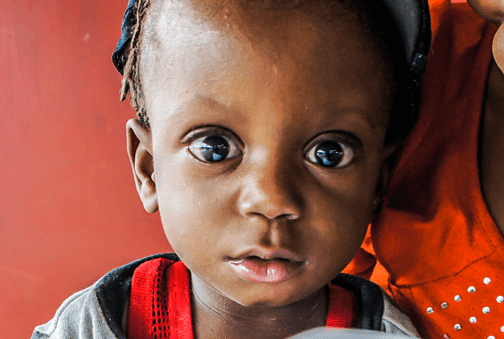 In part 2 of this series, Heidi Schulte explores the differences between development and relief. She looks at how development is creating personal and community transformation, as we seek to develop bodies, hearts, minds and social relationships through our Thrive for 5 sponsorship program in Haiti.

Robert, Richardson & Laurie are a trio of cousins we have in the Thrive program. They come from one of our needier family groups.

Robert holds a ball and is ready to play!

Robert was diagnosed with TB shortly after I arrived last fall and was extremely small and underdeveloped physically. He was also sick a lot and was so shy, he would cry if anyone (white people in particular) got near him.  About a month or so ago, his mom called me over during Thrive one day to show me something. She called Robert over to her and he WALKED! And it wasn’t just walking, it was almost a run!

Since then, he has started to walk and play all over the place, even interacting with other kids and the staff! In addition, you can tell he is much healthier. His hair is growing in nice and thick and healthy and  he is no longer on our “concern” list of children with malnutrition. A couple weeks ago when I was doing some basic developmental assessments, Robert passed his with flying colors! He was one of a few children who actually listened to the simple instructions and completed the motor skill actions! I was stunned. God is so good!

Richardson is about a 8 months younger than Robert, and has been quite the opposite of his cousin. He has an overall very happy and friendly demeanor. When he was a baby it was one of the easiest things in the world to get Richardson to smile! All you had to do was glance his way and he would burst into a beautiful, sparsely toothed grin! He was very content every day, and was satisfied to simply sit and stuff things in his mouth like any other 6+ month old!

Now, Richardson is nearly 1 year old and just a couple weeks ago, his mom showed me how he has started to walk! What a joy to get to be one of the first to witness this! He’s still a happy little boy, but he’s getting serious because he has important things to do, like keep up with the rest of the big kids!

Richardson’s all smiles Richardon is walking!

Little Laurie is one of those kiddos who can just break your heart looking at her. She was one of the last of our oldest group to join us, and as I said before her family’s situation made it clear to me that she really needed some extra support and love. She may have been even more shy than Robert for the first several months she was in Thrive. When you tried talking to her, she would ignore you and just stare straight ahead. She wouldn’t really get off the bench from where she sat near her grandma or neighbor who brought her (her mom does not live here and dad is not invested in her life).

Now, she’s one of our “crazy kids” we need to keep a good eye on. She’s made friends in Thrive and she’s not too shy to get in trouble with them. She and Gelène, our Thrive helper, have a precious relationship where Laurie knows Gelène loves her and is watching her, and to get her attention Laurie will try to cause disruption. Laurie is a child who needs more support, direction and love in her life. She is a smart, strong and more and more social little one.

One of our pastor friends in the area once said this in a sermon, and it has stuck. It’s simple, but true. Because He is God, and is all-knowing and all-powerful, He is much better at making plans than we are!

On a Thursday morning a couple weeks ago at Thrive, I felt overwhelmed by how unprepared I was. I came with a rough idea of what I wanted us to talk about with the parents, briefly shared it with Woody and Paula and we all ran with it. We needed to address the issue of parents and older sibling/cousin/aunt/uncle caregivers not supporting the children actually in Thrive in ways that stimulate growth and development. So first we reminded them of why we are doing what we are doing. We reminded them that not only do we have big ideas, hopes and dreams for their children, but they do as well!

They shared many of these dreams with us a couple months ago and it was very inspiring/encouraging. We reminded the parents/ caregivers that we are a holistic development program that is not just focused on one part of our lives, but that we are seeking to develop their bodies, hearts, minds and social relationships. We also emphasized that while we, as Many Hands for Haiti Thrive staff, do have a big role in this, we only see their children for about 10 hours a week. These parents and family members see their children every day all the time. They are the most important figure in the lives of these children, and have a huge potential for positive influence.

To illustrate how we want caregivers to help and teach and bless their children, we did an impromptu skit. Woody was the teacher/narrator, Paula was the mom and I was the toddler. We essentially (off the cuff, with no script or practice) showed different ways of responding and parenting. The families loved it! Paula was a great mom (since she is in real life!), I fake cried up a storm and Woody did a fantastic job commentating and using each action and reaction as a teachable moment. I wish we had photos of this hilarious session! Our audience was captive. Our message was comical, but at the same time (hopefully) clear and counter-cultural. Our results? Those are in God’s hands.

Through all the planning, dreaming, teaching, leading, praying and preparing, I am realizing many things. The first being, development is MUCH harder than relief, or so it seems. So much of the work in Haiti is relief-based. Feeding programs, medical clinics, clothing donations, school supply drives. It’s honestly much easier (in the short term) to pay for medical bills and medicine than to patiently teach parents and caregivers what they can be doing to provide more nutritious food for their children, or modeling simple home remedies that will help with basic colds and fevers. It’s often easier to lead an activity yourself than it is to teach someone else the vision and mission behind what you are doing and for them to not just do it, but to catch the purpose and vision and make it their own. It’s way less stressful and time-consuming to create and organize things on your own than it is to train someone else in such a way that they not only understand, but create and organize and problem solve for themselves.

But if you live this way, if you spend all your time on relief and you do everything for yourself, nothing will change. In fact, this may just create more dependency and problems later on, because then the program and activities completely depend on you! Development is much harder, but it is imperative for change. However, development is not all that is needed. Any non-profit, humanitarian organization can focus on development and be successful at it. But it’s only the second level. There is more.

I believe, and am seeing more day by day, that unless we are truly TRANSFORMED people…changed, renewed in our hearts and minds, not just in our physical circumstances, nothing will truly change. Development may happen, but it won’t last because the true problem, the decay and death caused by sin remain. And only the life-transforming, existence-changing power of the resurrected Jesus Christ can do this! We can have such hope in this. Because “the same power that conquered the grave lives in us.”

And Jesus promised that those who have been “born again” will enter the kingdom of heaven. He also told us to pray that “Your kingdom come, Your will be done, on earth as it is in heaven.” The transformation of His kingdom is coming and is already here!

This was Part 2 of this series. You can read part 1 of this article here.