This is written by Ken Landgrebe, MH4H US Operations Manager. This is his second time to Haiti and he is traveling with his wife, Kim, and his nine-year-old son, Kayden.

The day started a bit earlier than most days at about 5 am. Our destination, the Citadel. After traveling around 45 minutes, we were told the river we had to cross was too high because of all the rain. After some discussion, we decided to turn around and take a different route. This route would be a bit longer and the road was not as nice.

Shortly after turning around, it began to rain or more to the point, mist. The roads were not as nice, but the scenery was incredible. Words and pictures will never do justice to the beauty of Haiti. Banana, palm, coconut and variety of other trees line the mud road as we traveled. Each town we drove through had series of children waving as we drove through. The mountain road was covered with views of majestic peace. I was reminded often of God’s beautiful creation. I often think of trees and mountains when thinking of God’s creation, and that’s easy to do here. I seem to forget that God’s greatest creation includes human life and some of the most beautiful souls I know are in Haiti. A truly beautiful place full of beautiful people.

The rain continued to come and increased in intensity as we traveled towards our destination. As the rain picked up, we huddled under a tarp in the back of the pickup. For those that don’t know, we travel in a Toyota pickup while in Haiti. Today’s trip had around 15 people in a Toyota pickup, a taptap. A three hour or so ride.  As the rain continued, we heard of the flooding happening in Cap Haitien. Clauden, MH agronomist, took this picture from Cap this morning, Monday. Continue to pray for all of Haiti, and especially for the Cap Haitien area because of flooding, and the South, who are victims of the hurricane.

This is Claudin standing in the streets of Cap Haitian. The city has been hit with over 20 inches of rain in a 48 hour period.

We finally arrived at King Henri Christophe’s Sans Souci Palace, our starting point for the tour. The rain, however, had different plans as it went from a steady rain to a down pour. We waited inside the building hoping the rain would slow or stop. While waiting, we did some shopping and Christi went and rounded up some lunch, as we didn’t get to stop for breakfast due to our route changing.

After eating Haitian sandwiches for lunch, Tim Van Maanen decided he would buy a large hat to use as a Haitian umbrella. After deciding that the hat was sufficient to keep us dry, and the rain had slowed, we decided to tour the Palace. Each of our group now wearing our own personal umbrella. The Palace was incredible. Built in the early 1800’s, it was built without any concrete. They used cow blood, sugar cane, limestone, and gelatin to keep the structure together. The palace was complete with a swimming pool, large bedrooms, a huge dining room, and a library. During our tour, we decided the rain had stopped enough to try to make it to the Citadel. 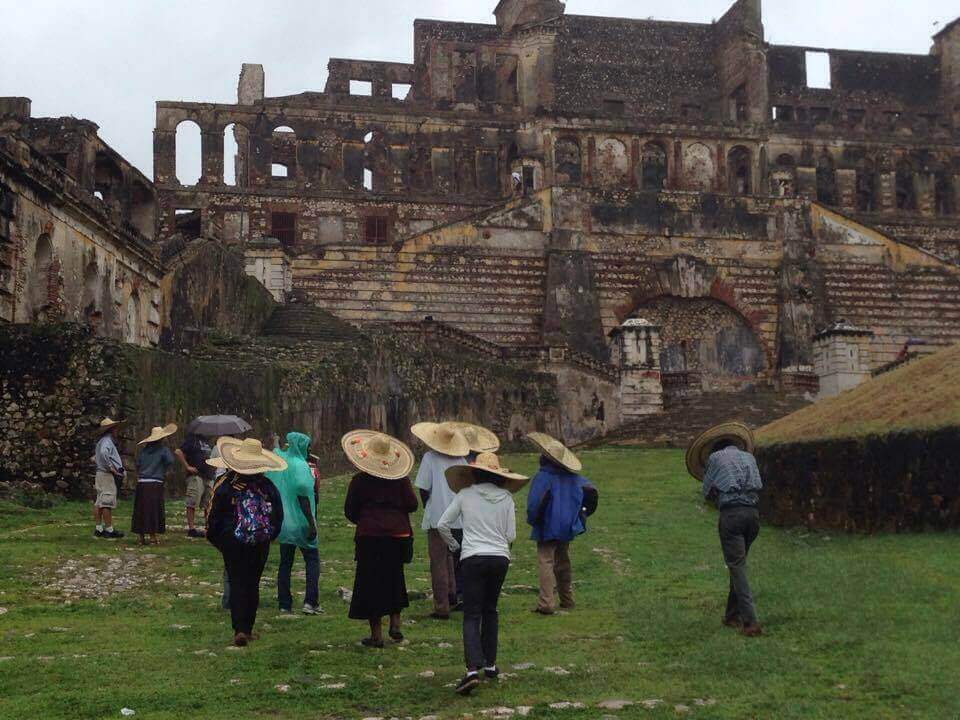 A rock, cobble stone road was our guide as our Toyota pickup traveled up the very steep mountain road. Excitement built as we traveled higher and higher. Once we reached as far as the truck could take us, we were met with numerous vendors trying to sell us souvenirs and rent us horses for the hike up. We started our hike, with Christi setting the pace. A very slow pace at that. I was at first a bit bothered at the pace, as I wanted to get going. However, after the mountain hike, I submitted to her wisdom. Ten minutes in I was thanking God for that pace and trying to keep up. The hike is only about 1 mile, but it’s steep. Again a cobble stone path and numerous Haitians were our guides. Once turning the last corner you could see the incredible structure. Again, words and pictures will fall far short of describing what some call the 8th Wonder of the World. The rain began once again to fall as we arrived at the foot of the large beautiful building. Placing our hats from the generous Tim Van Maanen on our heads we forged ahead. “We’ve come too far to stop now!” The Citadel was built as an Army fort.  Windows full of cannons never shot. Cannon balls in the yard. There is no foundation as the building actually uses the mountain as the foundation. The earth quake of 1842 which destroyed the palace below, didn’t even phase this ancient masterpiece. The water collection system in both the palace and citadel were so far advanced for their time. The entire building just far surpassed anything I could have imagined. Walls hundred feet high built by hand. It’s said between 10,000 – 20,000 Haitians died in building the Citadel. Absolutely incredible. Due to the rainy weather, we missed what I am told is an incredible view. What we saw however was clouds and fog.

The remains of the San Souci palace. Unfortunately, this was our view at the top. Not quite the breathtaking view as other teams have experienced.

The rain didn’t let up throughout the tour and we huddled up in the newly remodeled bathroom area, where we ate what snacks we had left and waiting for the down pour to stop. After deciding the rain isn’t going to stop, we threw on our Haitian umbrellas and headed down the mountain in the rain. Once again greeted the whole way down with vendors and “guides”. By the time we reached the truck, we were all pretty much soaked.

Due to the large number of very aggressive “venders”, we all hustled back into the truck and began down the steep mountain road. Once again a tarp covered those of us in the back. We arrived at the bottom of the road, letting one passenger off and resituating our sitting arrangements. The rain refusing to let up we all once again loaded up and we set off for our 3 hour ride home. I would like to tell you again we saw the beautiful scenery, but the rain was relentless and we once again continued our huddling under the tarp.

On our 3 hour truck ride of bumps, mud, and driving through rivers, my 9 year old son Kayden managed to fall asleep 3 times.  Now, if you have ever ridden in this Toyota and on these roads in Haiti, sleeping is not an easy task.  The first time he fell asleep was after starting at 5 am and he was sitting in the back of the tap tap, then he fell off the bench in the back with me catching him before he landed.  The second time was just leaving the Citadel, we had not left Milot yet and with every bump his head would drop.  It was not any easy task holding his head up and his leg from hitting the gear shifter.  The third time was on the end of the drive when it was dark.  He was a trooper through the whole day.  We left before the sun was up, it rained at least 8-9 hours on us.  We were soaked.  We then got back after the sun had gone down.

I had always thought the Citadel was more of a tourist thing to do, without much real value to the people we serve in Haiti. I couldn’t have been more wrong. It is so relevant to understanding the culture, history and leadership in Haiti. Highly recommend anyone going. We must first understand the people we serve before we can genuinely engage them on a meaningful level.

The ride was long and after sometime under the tarp we decided we would rather be wet and see than spend any more time under the tarp. We stopped around half way for a Haitian rest stop (a tree), for bathroom breaks and to stretch our legs. Again the view…incredible. Looking out over the mountains of Haiti, you are left breathless. For a moment, you forget about the deep, generational poverty that exists. It only takes a short drive down the road, however, to remind you that poverty is very real. Again one room houses and naked children line the mud roads and you’re surrounded by beauty and poverty living together in a place, and with a people, that my God loves as much as He loves me, and where I live.

I am often asked why I do what I do. Why work somewhere for less money, more hours, more to do. The answer is simple. I know I am called by God to help people in Haiti. That isn’t burden – it’s a gift. A gift from God. I am reminded, once again we are better together. Pi bon ansonm!

The rain stopped just outside of Pignon. As we pulled in, it was the first time I felt the feeling you get when you pull into town after a long trip, you know the “I am home” feeling, and I realized I wasn’t home. I was in Pignon, miles from “home”.  It was then I was reminded home is where your heart is, and my heart is, and maybe always will be, with Haiti. Taking a little piece back to the United States each time I come.