A Wedding of a Lifetime

Early in May 2017, Many Hands for Haiti Chaplain, Lumanes, introduced the idea of MH4H providing an opportunity for new believers in Christ that were being ministered to through the work of the MH4H Chaplains.  Pastors Lumanes and Jean Ronel saw numerous men and women who had come to know Jesus as their Savior that were living together as a family, as parents of their children, but had not been united in marriage in God’s eyes.
Nearly everyone who considers marriage has hopes of it being a very special and memorable day.  These Haitian couples were no different. What if there were a way to offer these couples a day which honored God through a man and a woman making a commitment to each other, and to God, that could be witnessed by family and friends? This was a prayer presented to God by MH4H. God answered, “YES!”
The number of couples was unknown but the interest was there. The MH4H Chaplains began meeting with those that had recently committed their lives to Christ, taking time to disciple them in the Word of God and began counseling them on what God desires for husbands and wives. Soon a date was set, Saturday December 30, 2017, and after some time, twenty-one couples, representing five different area communities, made a commitment to honor God by being united together in marriage. Each couple also connected with churches in their respective communities and would be guided in the future by those local pastors.
MH4H wanted to offer a very special celebration which should involve a special gown, shoes, suits, ties, rings, and food. After contacting some friends of MH4H in the US, offers were coming of new wedding gowns, new shoes, new wedding rings, etc. for the anticipated day. With the generous gift of people’s time, the generous donations, and the help of short-term mission teams traveling with extra luggage to bring these beautiful things to Haiti, the idea was becoming reality. 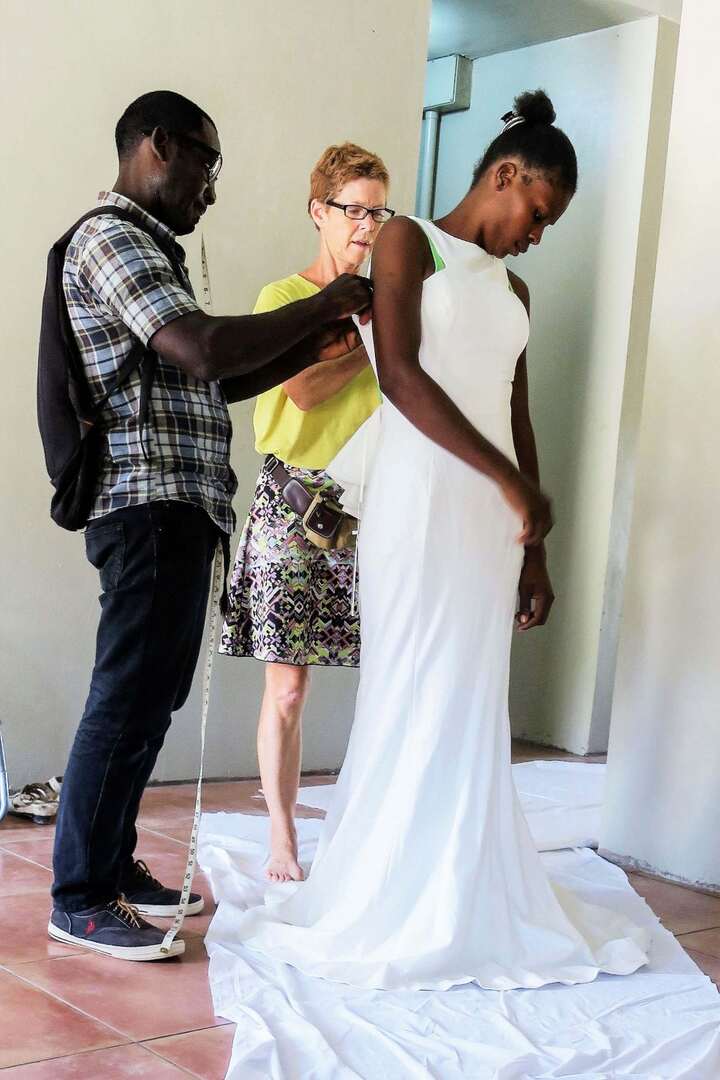 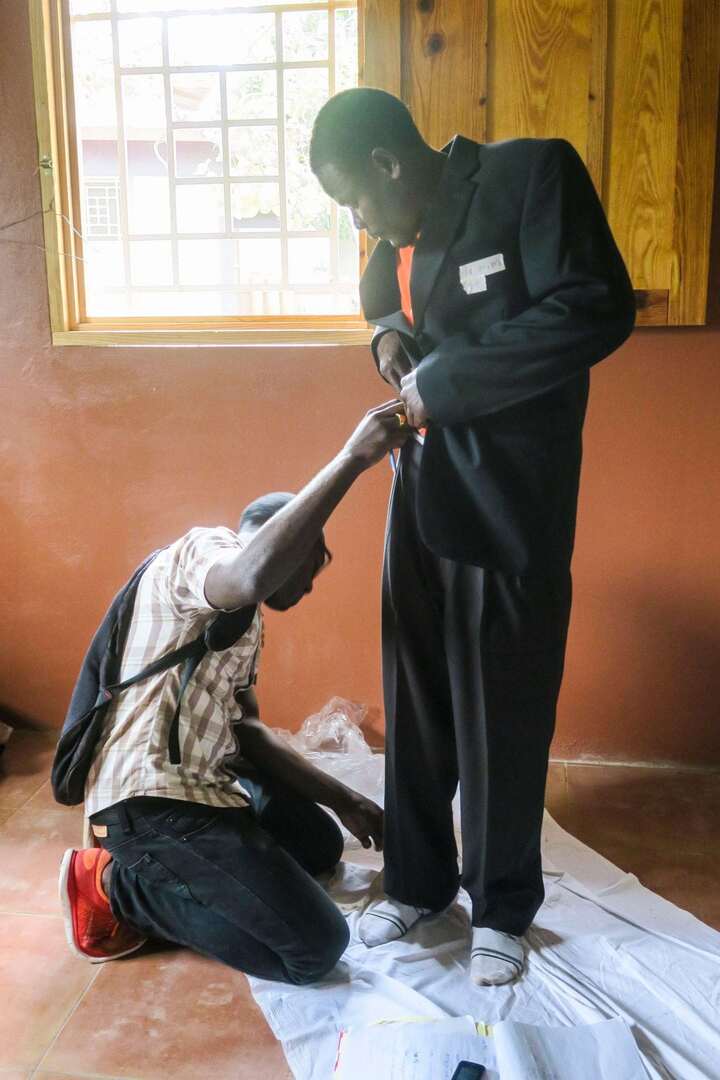 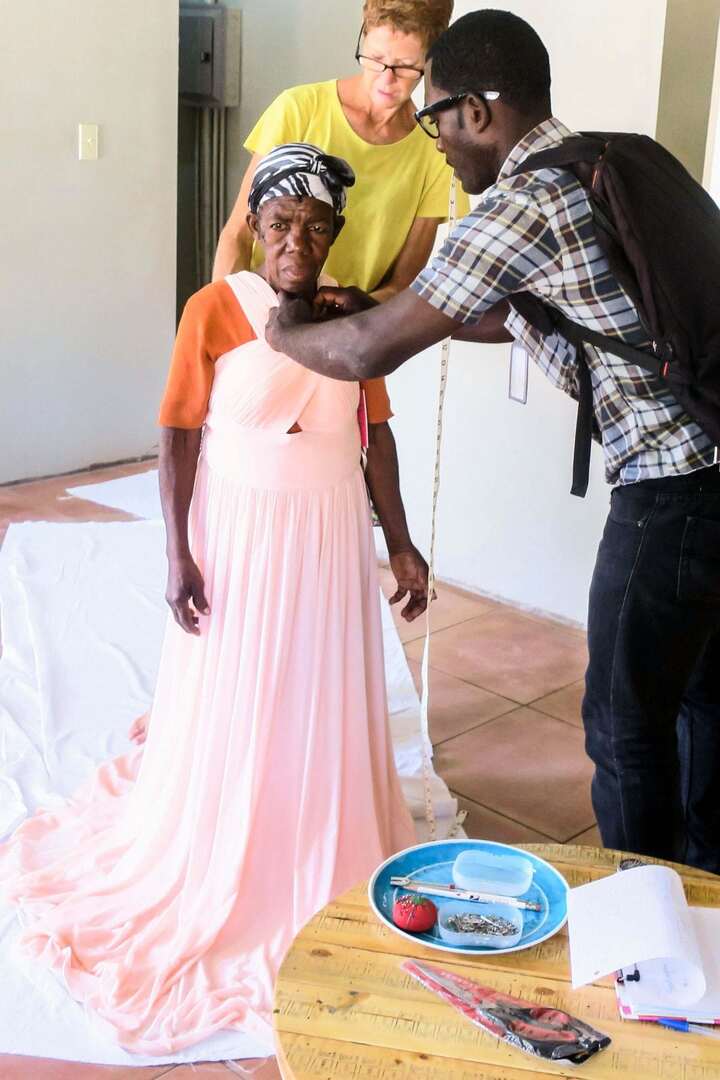 The MH4H Chaplains continued to meet with all twenty-one couples, offering pre-marriage counseling throughout the months leading up to the wedding. Musicians prepared their music selections that would be played on an electric keyboard, guitar, and violin. On a very limited budget, a menu of ham and cheese sandwiches, decorated wedding cakes, and cold drinks was planned. Decorations for the Equipping Center where the ceremony would be held were kept simple, yet beautiful. 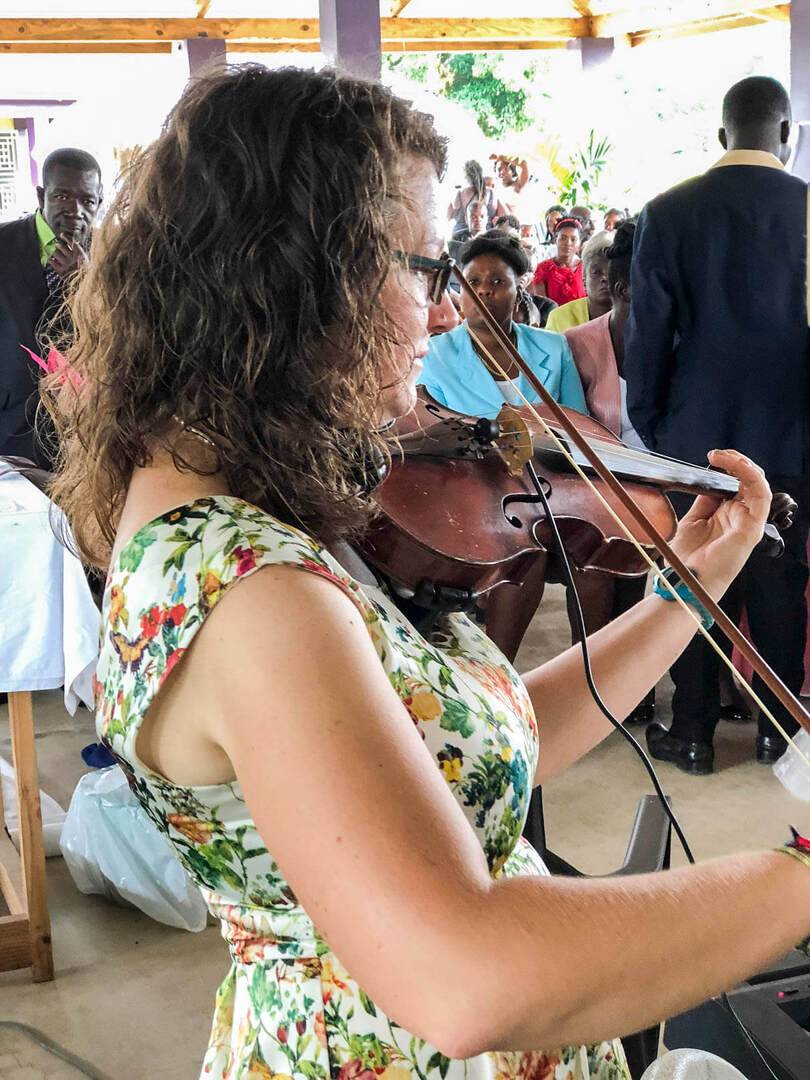 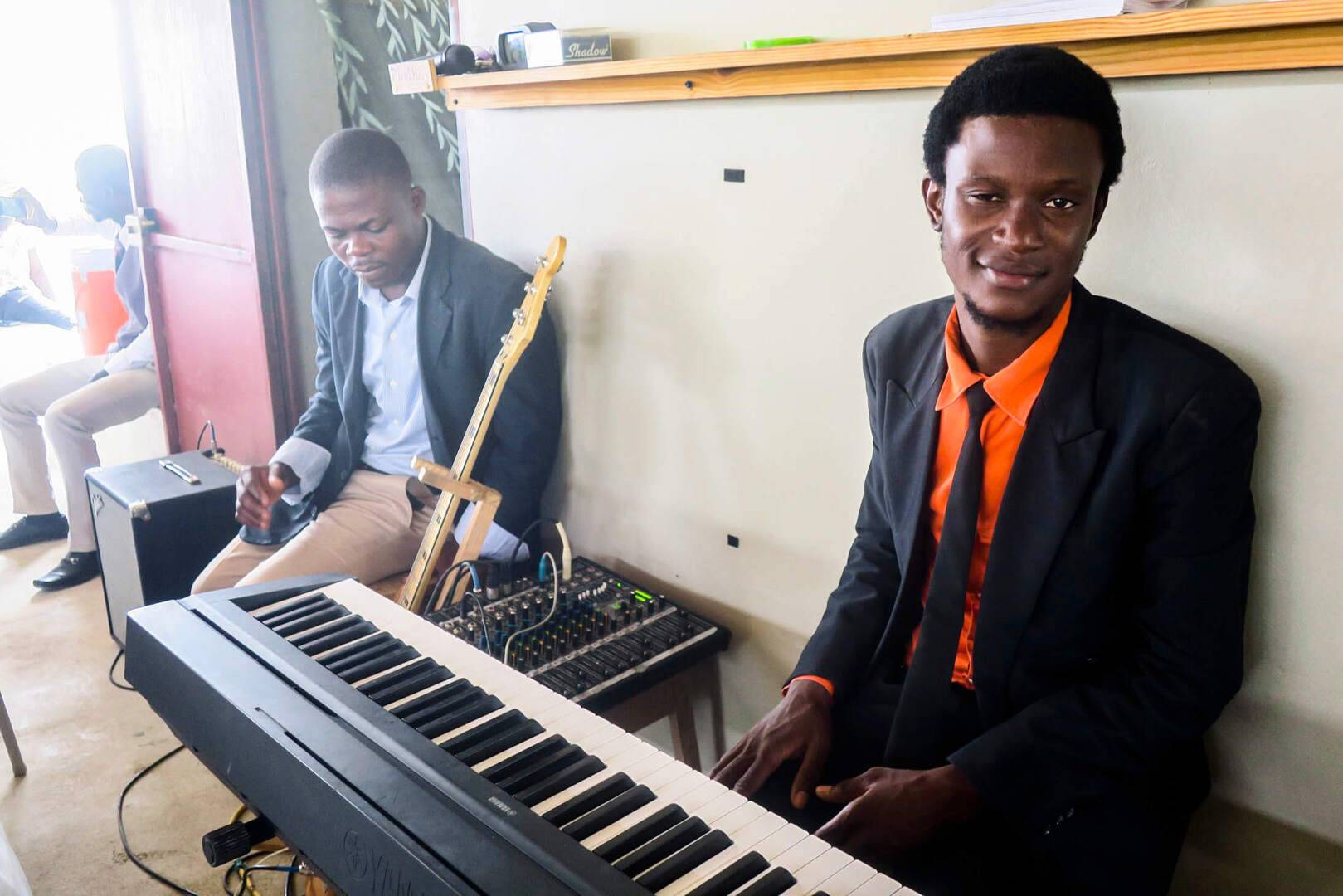 Days prior to the designated date, disappointing news came that one of the grooms-to-be was not prepared to give up his past lifestyle.  He had another woman in his life which unfortunately can be fairly common in Haitian culture. MH4H Chaplains talked with the couple and realized the marriage commitment would not be sincere on the man’s part so they were not to be part of the ceremony.
The long-awaited day arrived filled with freshly done hair, freshly pressed dress shirts, and newly unwrapped handkerchiefs for the men’s suit pockets. The start of the ten o’clock ceremony was expectedly on ‘island time’ and began at eleven o’clock. The beautiful brides and handsome grooms processed into the venue on MH4H campus while family and friends captured the moments with cell-phone pictures and video. The gathering of nearly 350 people was one of worship and praise and thanksgiving to God for all He has done and will do in the lives of each couple. The ceremony proceeded with such ease through each portion of the wedding program. The pastors of each couple’s church were there to ‘marry’ them with personal vows. 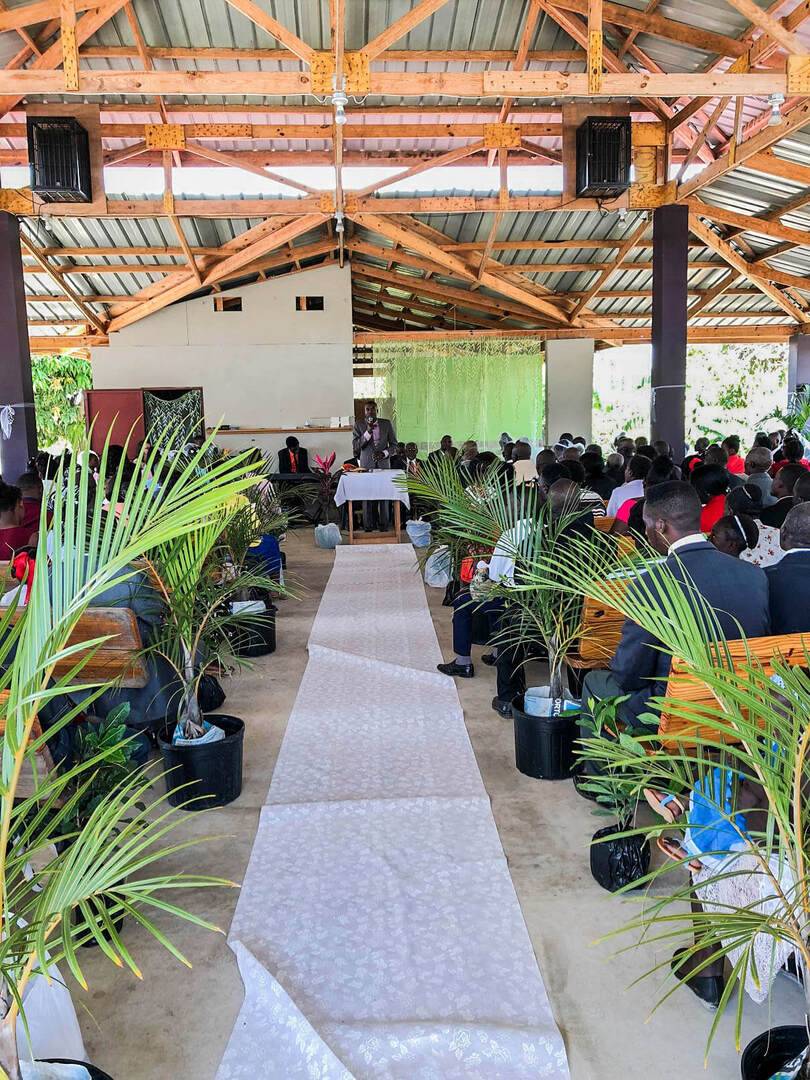 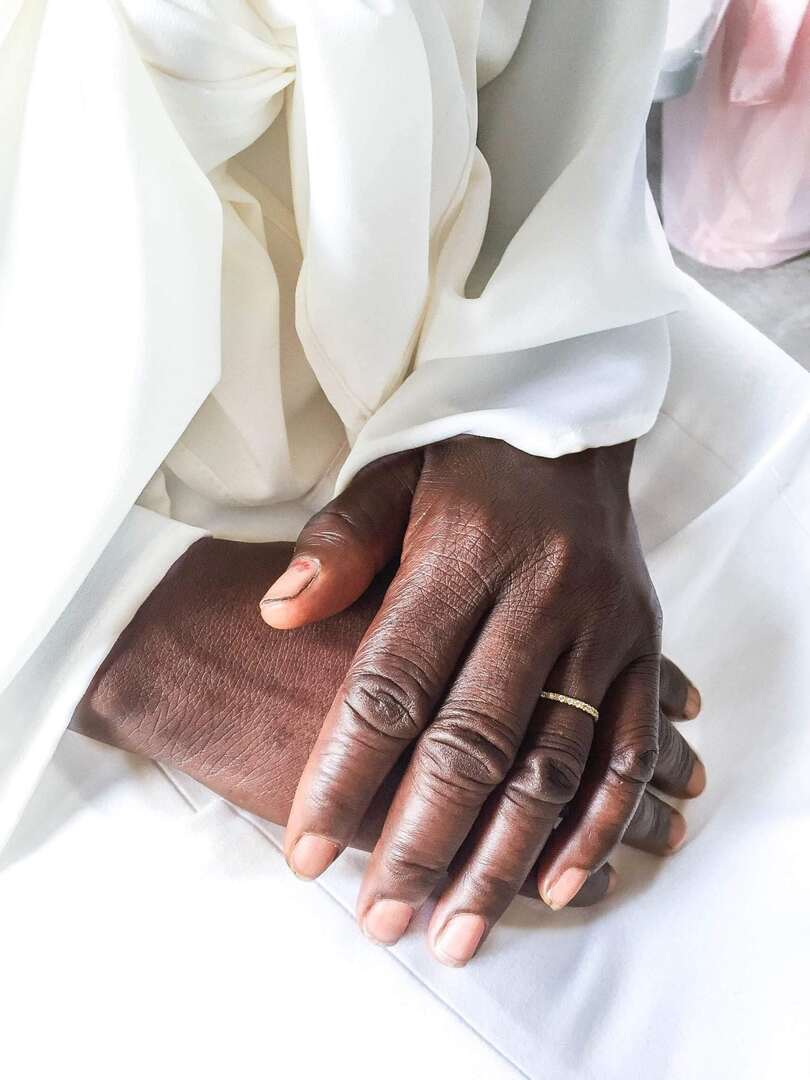 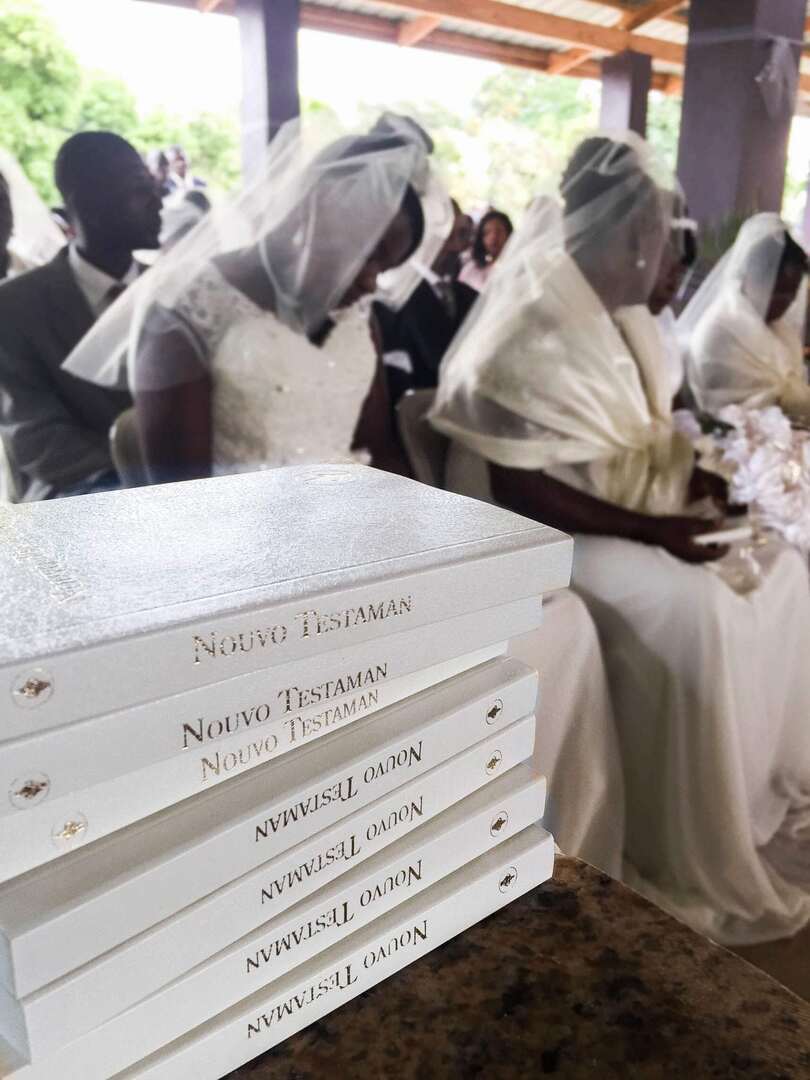 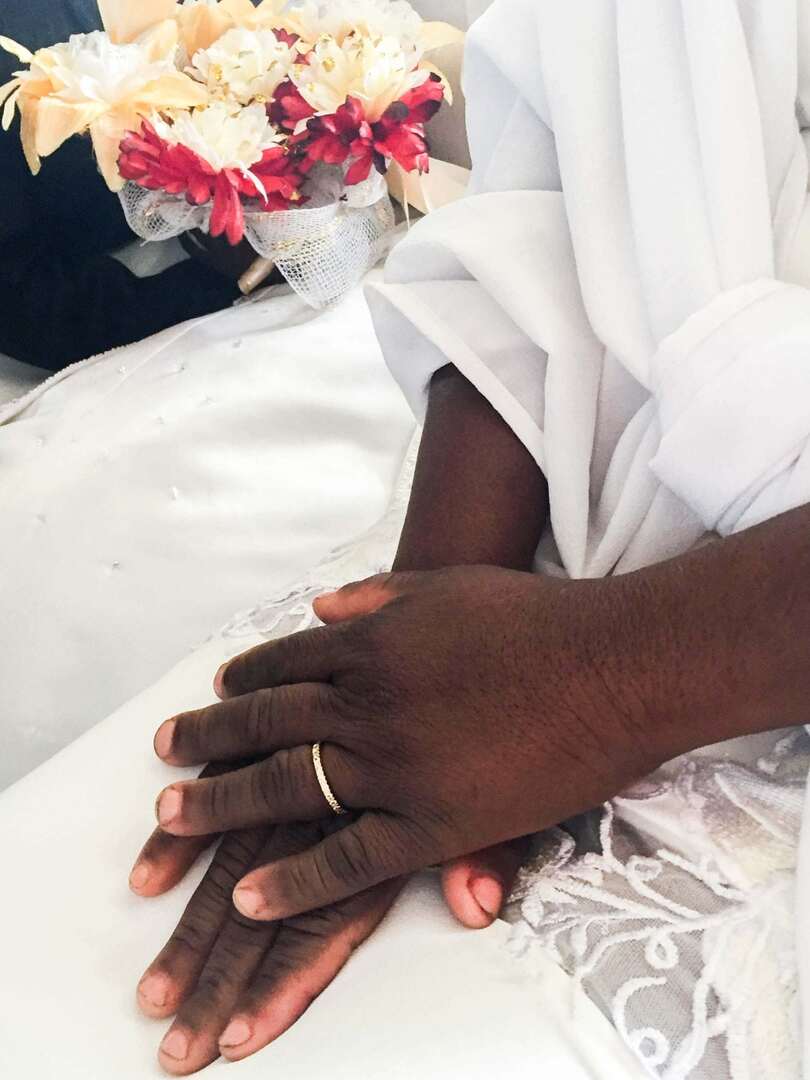 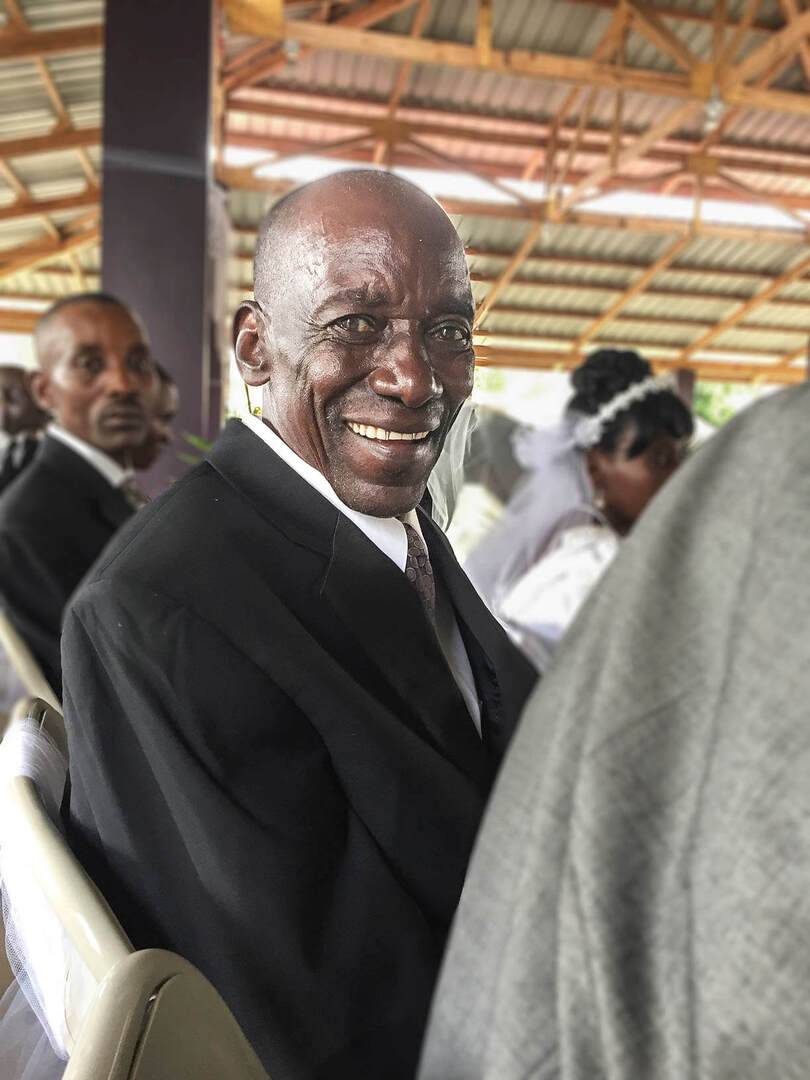 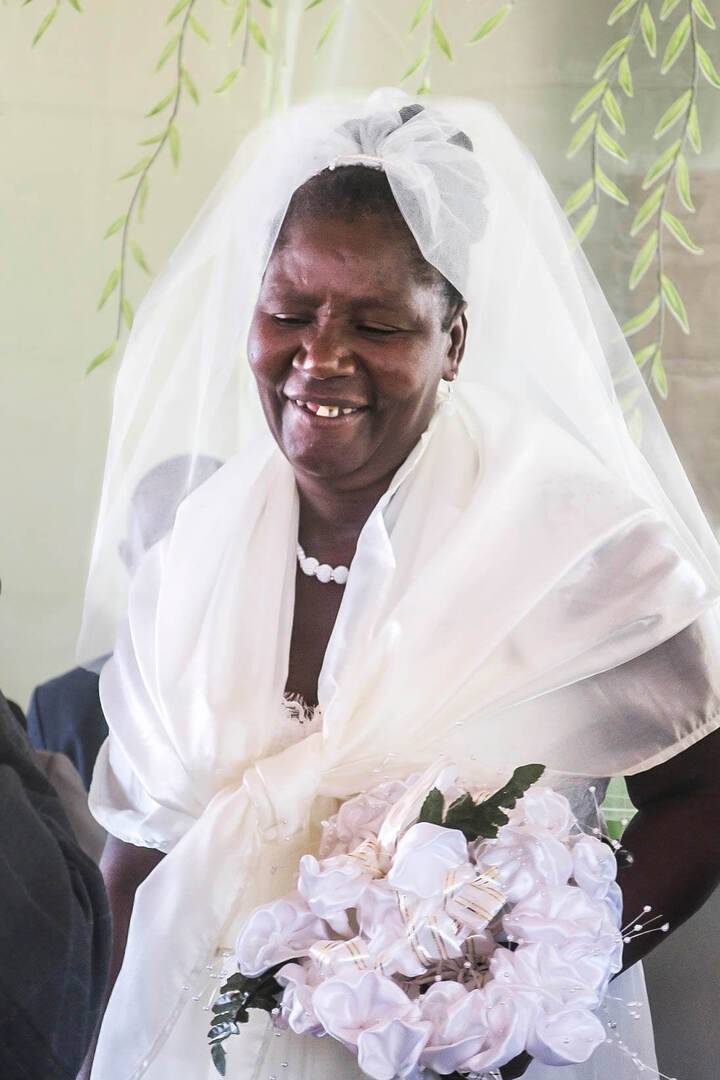 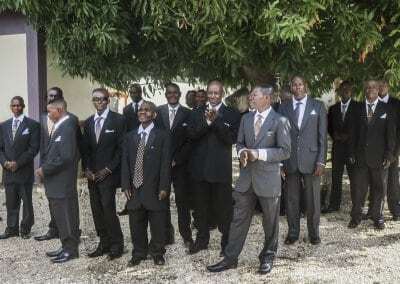 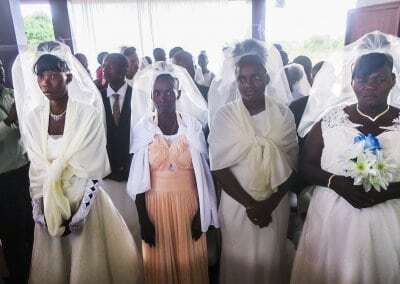 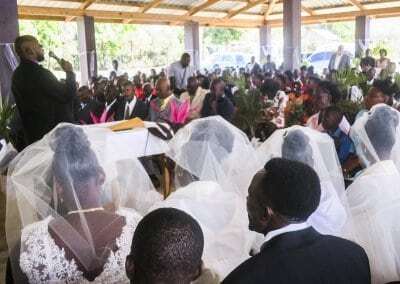 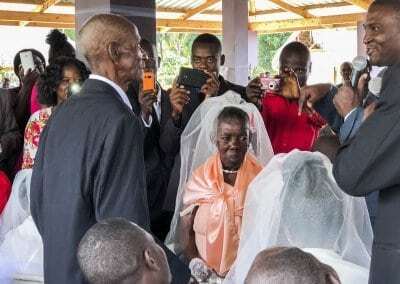 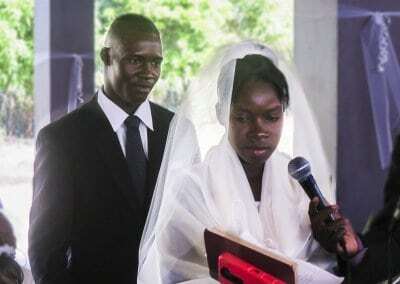 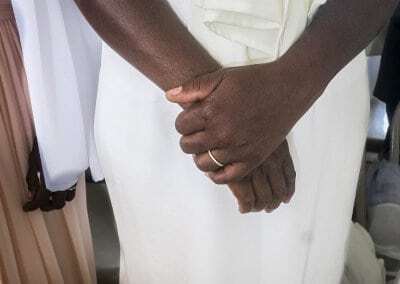 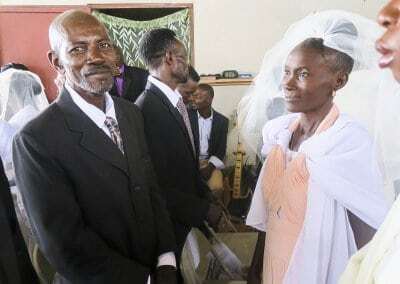 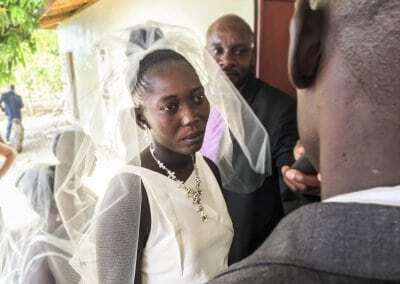 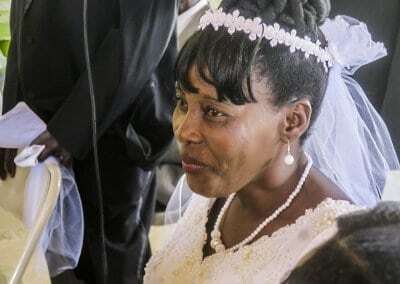 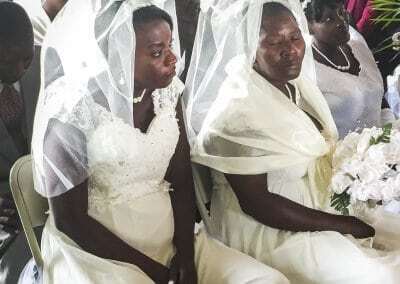 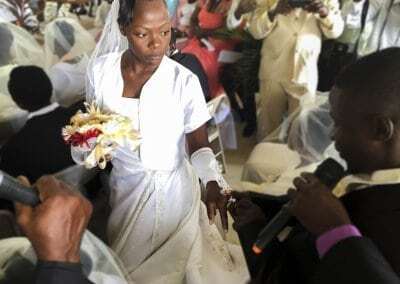 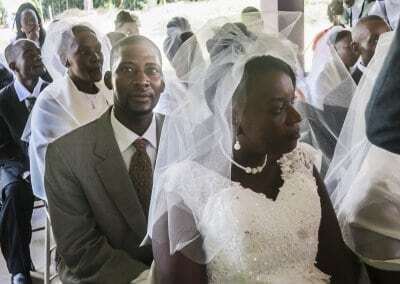 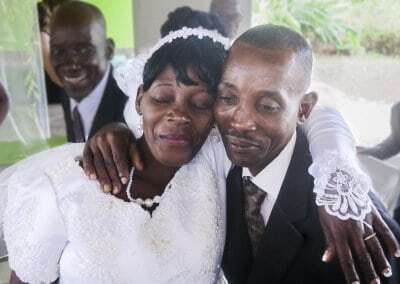 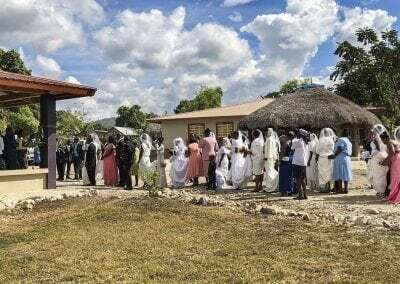 Three hours had passed. The couples signed the marriage certificates, they were presented as husband and wife, a benediction was proclaimed, and corks were popped on bottles of chilled Champagne to be shared by the newly wedded couples. The sandwiches and cake were quickly served to all who attended in an atmosphere of joy and excitement. 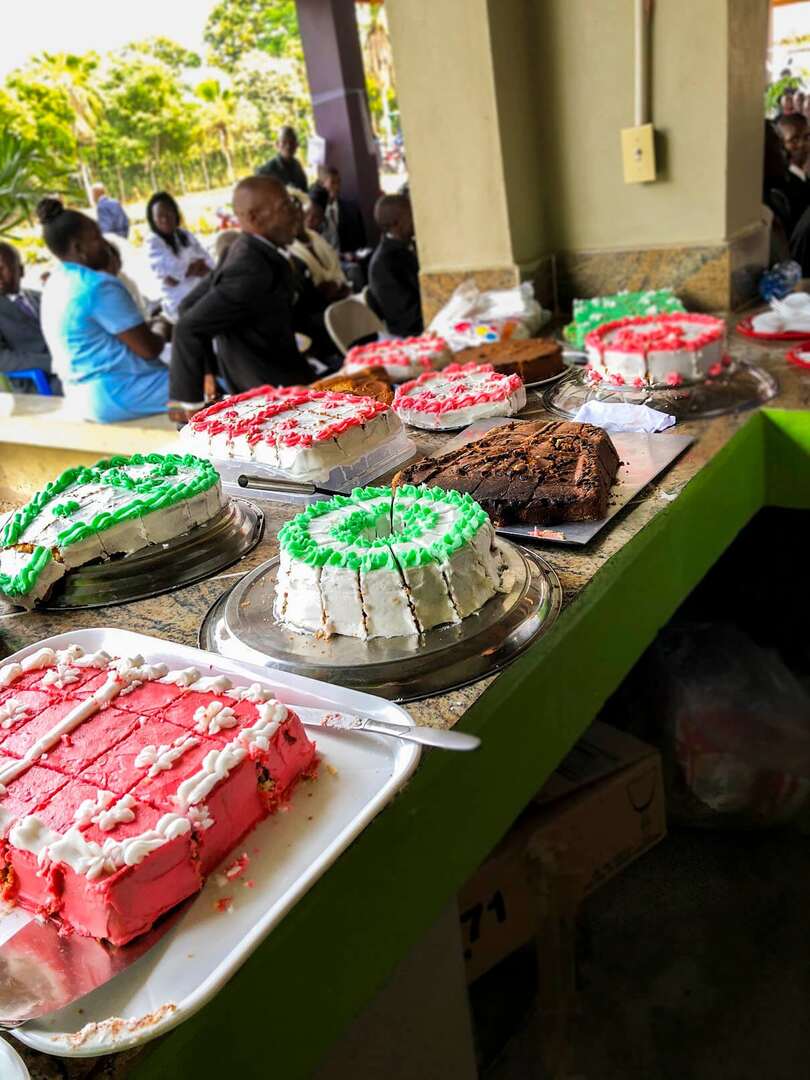 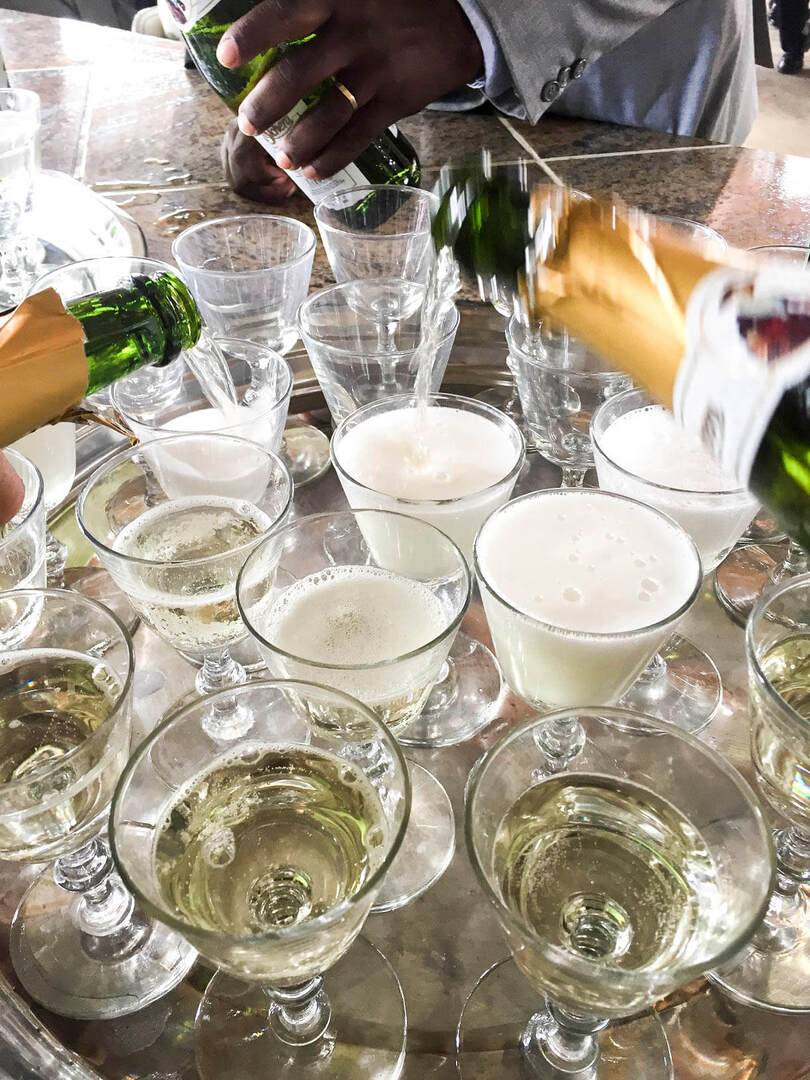 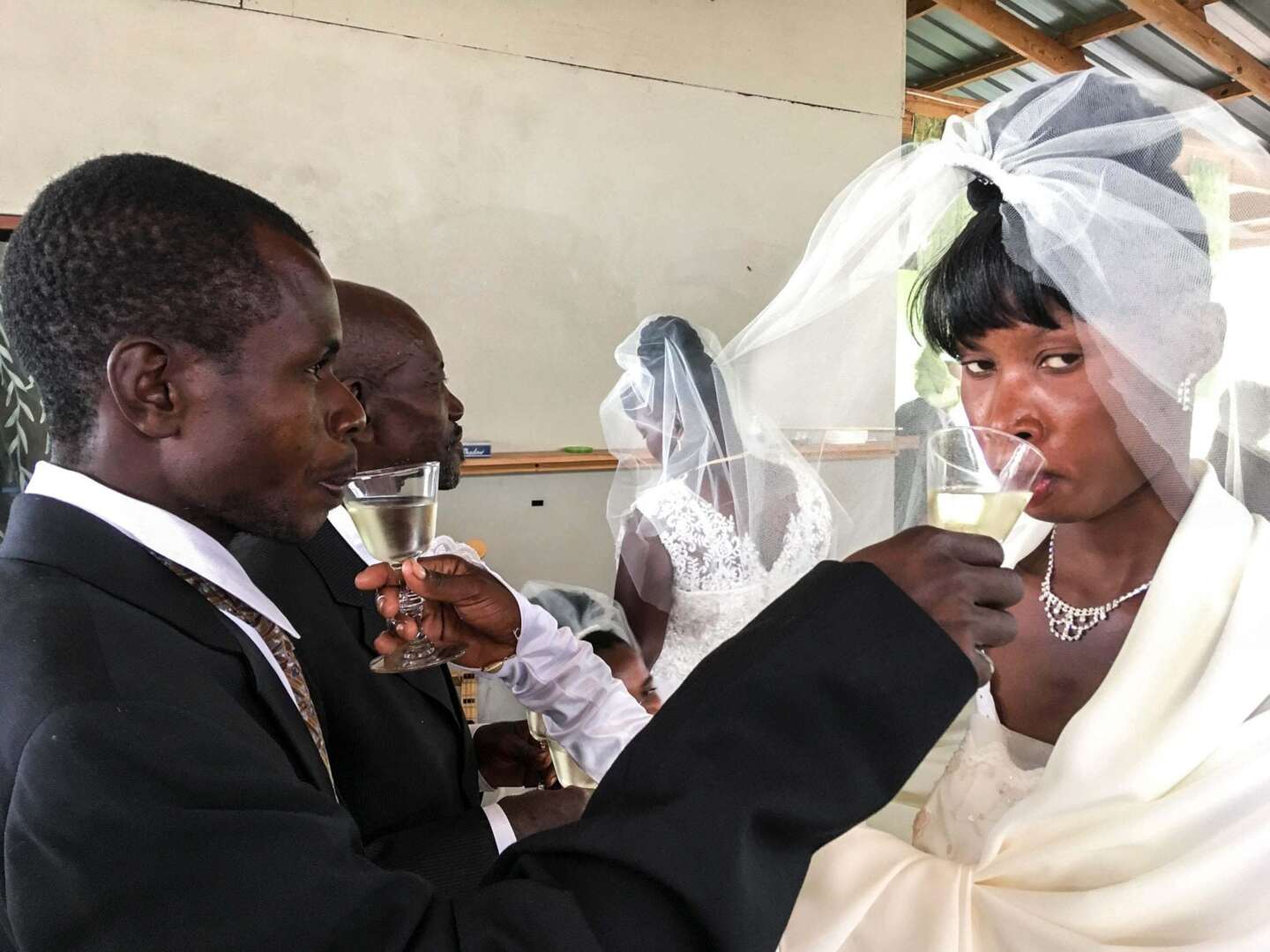 Time for the couples to depart, MH4H provided “limousine” service back to each community. 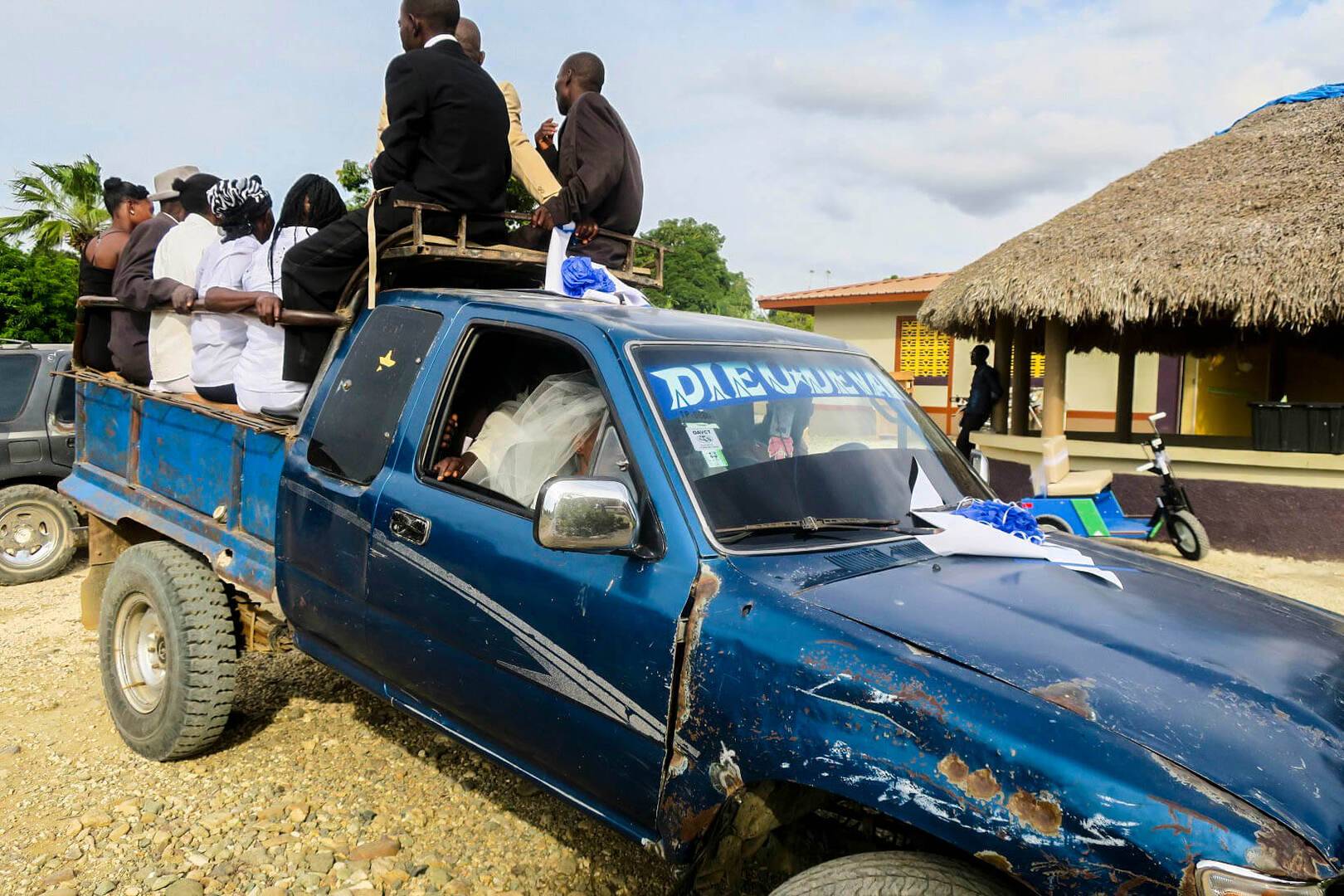 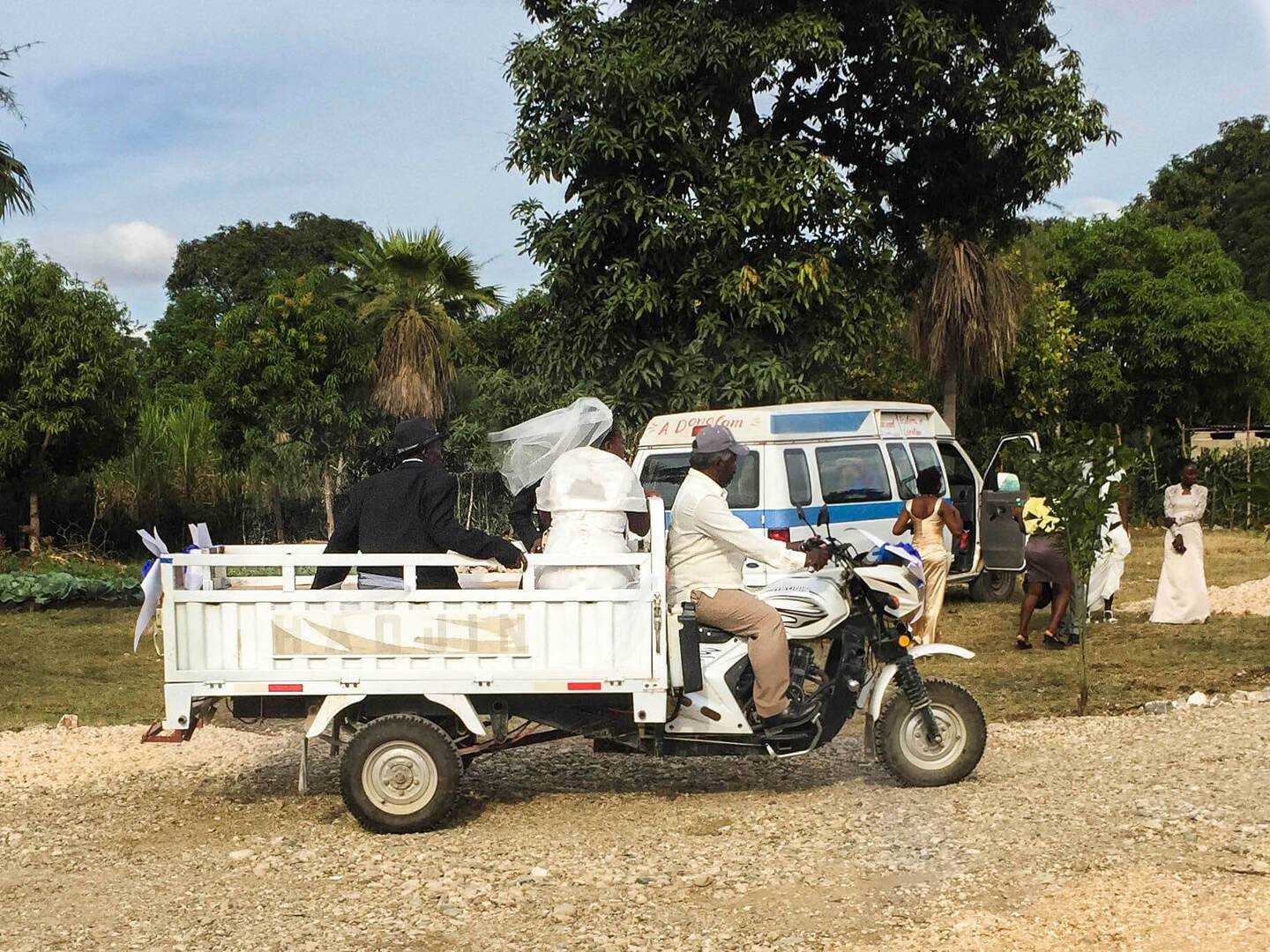 MH4H has provision for two weddings which will be planned for the year 2018. Since it is common to be together as a family but not united in marriage in God’s eyes, many have already approached MH4H Chaplains to be considered in the planning process. To God be the Glory!