The guide knew we were the adventurous type… 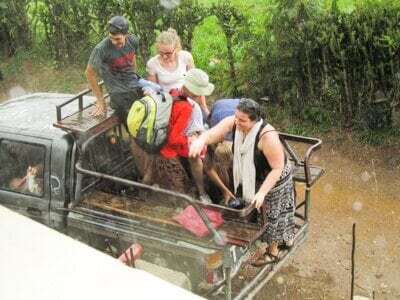 The group at the Citadel

Our day started this morning at 4:45.  We all (with the exception of Terri, who was feeling sick) got up before the crack of dawn and collected ourselves to leave for Citadelle Laferriere.  Our truck was waiting for us just outside the gate laden with benches.  We all piled in with our snacks and water bottles.  Our ride was so bumpy that it started to make our butts numb.  Other than that and the fact that there were seats for us on top of the cab, the ride was mostly uneventful.  We made a quick breakfast stop halfway there in a town called Dondon.  A quick seat change and once again we were off to the citadel.  A few trees sparked conversation about “dog-party trees” and Jurassic Park (the theme of which is stuck in my head to this minute) which kept us occupied.  Upon our arrival we noticed a wall of paintings for sale and a massive palace off to the side of it.  The palace was that of Henri Christophe, built in the beginning of the 19th century.  The site was amazing but we still had yet to reach the citadel.

From the palace, there was a quick drive up the mountain to the trail which would lead us to the citadel.  Here we had the option to ride a horse or go the trail on foot, but only Kyle, Jack, Cadena, and Kristi decided to ride on horseback.  Not to our surprise, the trail was a minefield of horse poop, but we managed (for the most part) to get up the hills unscathed.

Upon reaching the citadel, we could finally see the true splendor of the enormous structure.  The fortress was built not only to be impenetrable, but also to be pleasing to the eye.  The citadel, even at first glance, looked very cool and impressive.  Our tour guide led us through the huge interior, giving us time to adventure on our own at times.  We were very impressed by the views, the cannons (technically cannon, but most people would read that as singular), and the huge piles of cannon balls.  For our first incident, Abigail and Andrea decided to ignore a locked, very penetrable gate with a “no passage” sign and got our attention from on top of a part of the building that was, once again, “no passage.” Needless to say, our tour guide wasn’t happy.  He got them to come down pretty quickly.  Later, we saw what we thought were jail cells.  One had no bars over the window so we asked if we could climb down.  Now that the guide knew that we were the adventurous type, he just decided to let us go in (even though most people aren’t allowed).  Later when we found probably the nicest bathrooms in the entire country (obviously not part of the fort originally), he allowed us to go through a door in the men’s room that most people aren’t allowed through which gave us access to the top of the outer wall.  We took our time here, taking pictures all-the-while, and eventually, for our second and final incident, another tour guide saw us and wasn’t so happy with our tour guide for letting us up there…  Our tour guide decided that we should probably get down (not before we finished taking some more pictures) to avoid further trouble.  As we took our exit from the citadel, we marveled at how much different our experience would have been if the citadel had been located in the United States: we all might have been arrested for going out of the generally accessible areas and the place would have been crowded wall to wall (it was actually fairly void of people).

The group at the palace

Breanna at the Citadel

The group looking out to the sea from the Citadel

We had a lunch break and then descended the walking path.  When we got to the bottom we were swarmed by merchant ladies.  We managed to escape to the truck and leave the establishment (though Bree got some wooden flutes and Abigail a present for Joslyn).  The ride back was still bumpy with even more butt-numbing.  Just before we reached the dorm it started pouring and we all got soaked just prior to entering the house.  We just chilled for a while, had dinner, and celebrated Hank’s birthday with cakes that Terri frosted while we were away.  When we finished eating, Hank started to blow up a giant party balloon which gave us all many laughs until two minutes later when Kyle decided to bounce it off of Jack’s head and it hit the ceiling and popped.  The End.

Back from our adventure to the Citadel, in the rain

Hank (the intern) celebrating his birthday

Today is the day I have been eagerly waiting for….the day I got to meet my sponsored child.  I started sponsoring her after my trip last year.  She is 18 months old.  Her name is Victoria Melissa Pierre.  I pray for her and her family regularly, and her picture is prominently displayed on our refrigerator.  I had brought gifts for her and the other children, and food was purchased for the family.  Since the truck was being used, we had to take the motorcycles.  It was an adventure to load two 10lb bags of rice, a 10 lb bag of beans, misc. other food and a jug of oil in addition to the back pack of gifts.  Our caravan of 3 motorcycles took to the bumpy, rocky, sometimes wet road.  Thanks to the expert driving of Craig, I made it in one piece and so did all the supplies.   I feel truly blessed to sponsor this child.  She is beautiful and truly a blessing from God.  It was a heartwarming experience and everything I had hoped it would be.  I am just glad she wasn’t scared of the blanc!