Always room for one more

Today started early again.  We tried to leave the compound by 5:00 AM to climb Mount Pignon to beat the heat.  We learned early on that a saying in Haiti is there is “always room for one more” in a vehicle.  So we piled 17 people in a Ford Ranger to drive the 4-5 miles to Pignon. It was market day in Pignon so the procession of people selling things was starting their way to town with all their products.

The “highway” is a gravel road full of bumps, mud holes, and tire tracks over a foot deep. About halfway, we ran into a traffic jam because a large truck loaded with bags of rice got stuck. When another truck tried to go around it, it also got stuck.  We could not pass so we turned around.  We also got stuck, but were able to push ourselves out since we had so many people.  After we got back to the compound, we got a plan for someone to meet us on the other side of the stuck trucks.  In order to make that work, we needed an extra person to return the truck, so of course there is always room for one more and had 18 on the second time.

Now up the mountain, it was a very hot hike up to the top where a number of Haitian boys either saw us climbing or knew we were going up there and met us at the top.   The view at the top was great but was made even better with some devotions and singing some worship songs at the top.   One of the guys at the top shared a granola bar with one Haitian boy.   The impressive part was that this boy then took his half a bar and split it to share with six other boys.   (Later, we saw in the market mud cookies that are literally made of mud, only to fill their stomachs with something.)   It was a tough climb, but we were blessed with no serious injuries.  Several cuts and scrapes, but we saw God’s protection with all the people making it safely. 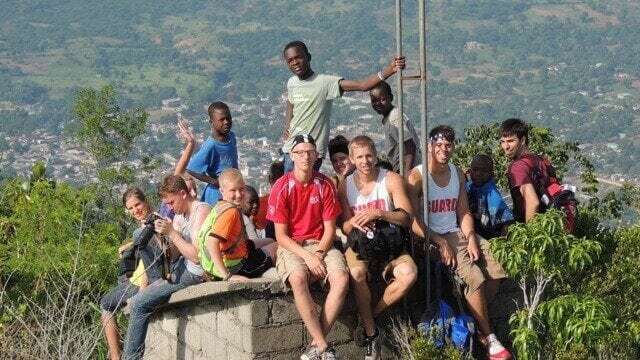 The market was a sensory overload.  It was incredibly crowded with many people bartering and trying to get wheelbarrows or motorcycles through the crowded streets.    There were many stands that were cutting up fresh meat with machetes and leaving it on the table in the sun to sell with flies buzzing on or around the meat.  Rest assured, we didn’t take any of that home.

After running out of water and being really hot, tired, and hungry, we made the trip back to Savanette.   Since the well doesn’t have enough water for all of us to take “American” showers, we were looking forward to going to a spring where we could clean up with lots of water.   We walked the 10-15 minutes to the spring, but it was a bit different than us rookies expected.   It was a small area filled with a bunch of Haitian women bathing.   The guys in the group decided it was outside of our comfort zone and walked back, while the ladies in the group enjoyed the cool abundant water.   The people of Savanette enjoyed watching a number of American women bathing with their clothes on.

(Above) All the women enjoyed bathing in the spring, while (below) all the Haitians enjoyed watching the crazy “blancs”.

Tomorrow we are looking forward to going to a Haitian church and then starting Monday to participate in the Many Hands for Haiti ministries.