Blog is written by Matthew Dalthrop, a junior at Luther College in Decorah, IA. Matthew is at our grounds in Gonaives, Haiti.

This is my first time outside of the United States.  After two flights today, I’ve only been in the air a total of three other times.  Needless to say, I’ve done more new things today than in recent memory. Being in Haiti has been quite the eye-opening experience for me, and I’ve only been here for a mere seven hours.  I’ve been exposed to many Haitian things: cooked plantains, pouched water, and the abundance of tent cities that run parallel to the major highway in Haiti. 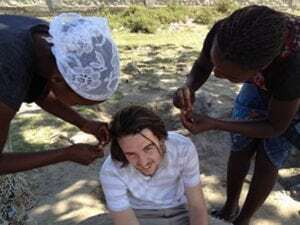 But I’ve also been exposed to many things of inspiration and hope.  The mission of Etoile (which means ‘starfish’ in Creole) is envisioning bigger and better things for its community.  As I was given a tour of the establishment with Woody, sites of a planned school were pointed out; its students – being kids in the nearby neighborhood – would be sponsored and given a free education along with everlasting friendships and security.  Tonight, while eating dinner, the room was filled with noises of little girls singing Christian songs that I once learned myself at church camp.  This, more than ever, shows me that the love of Jesus has no boundaries; that his love is able to transpire through time, through distance, through financial successes or sorrows, and – as the girls shown – through language.  His love goes through all that.  And if we are to love as He loves us, so must ours.

When we landed in Haiti, the airport was filled with a rainbow of missionary teams and their colorful shirts, all here to offer their service, their time, and their hearts.  There, in that place at that time were people who came despite differences in language (one person was from Montreal), differences in distance (from Boston to Brazil, and everywhere in between, it seemed), or differences in time spent here.  And yet all of us were there for the same reason: to spread God’s love and to love others like He loved us.

But loving others means more than just coming and going.  The love that God showed for us is found within the relationships made while we’re here.  Just as God wants a relationship with us, so must we want a relationship with others.  I’m still trying to fully grasp what that relationship looks like, but I think it has something along the lines of finding the hope and inspiration in an otherwise desperate situation.

This new adventure has just begun, and several of new experiences have already happened.  I look forward to this realization of God’s love and how we’re supposed to share that becoming one of the many memorable experiences I have here.

The saying goes that soccer – or footbol – is the international sport.  It is true here in Haiti as well.  After spending the day in Etoile struggling to overcome the language barrier with nearby children, all language walls holding us back came down when the soccer ball was brought out.  A game began, and before we knew it, communication between Haitians began.  High fives came as often as goals, laughter as numerous as the temperature was high, and good times were to be felt by all.  This feeling was epitomized when one Haitian twelve year old said to me in his struggling broken English, “I.  Am happy.”

In the evening, the electricity once again went out, plunging us all back to the dark ages at 9:00 at night.  As I made my way to the roof’s lookout spot – the place to go when you need to reflect was well as look at every star in the galaxy – it occurred to me how simple life is in Haiti.  There is a sense of peace and calmness that is too few and too far in between in the states.  Taking time to count the stars and one’s blessings is something that I’ve grown to enjoy while staying here.