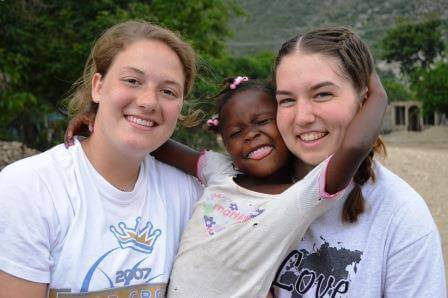 This morning we woke up to the smell of pancakes. These pancakes were not like typical American pancakes, they were close to an inch thick, but filled us up for the long day ahead. Today was similar to yesterday in that one group stayed at the compound to lead the morning session of the conference and the other group went off the Pella Christian School.

The topic for this morning at the conference focused on calling. We began with a skit on the Good Samaritan, sharing about how God calls us to love our neighbors as ourselves. We then shared about the general calling of all Christ followers, to love God and to love people and then moved into how we can use our individual callings for God’s glory. Tim Brand spoke on Nehemiah and how he was called to rebuild his country even though he was in a foreign land. The king allowed Nehemiah to return to his country. However, when he arrived to his country, there were people who didn’t support him and wanted to kill him, but he refused to give up God’s calling for him. This message was powerful as it resonated with the people of Haiti, living in a country that needs to be rebuilt. They were challenged to rebuild Haiti by being a light to others. This was a powerful morning and more than 80 Haitians came up to receive prayer for a new life with Christ.

For the afternoon session, our last session, we planned to talk about freedom and victory in Christ. However, the Haitians had a different plan. The Haitians learned so much in the past three sessions that they wanted to bless us by sharing what they had learned. They told us that they didn’t have any physical possessions to give us as a sign of gratitude, but they had something even more powerful: prayers. They invited us to the center of the room and prayed for us. Although, we couldn’t understand their words, we could feel the Holy Spirit moving through them. These prayers were everything to us. As the Haitians left, they received a bag full of hygiene products. Each Haitian made sure to shake each of our hands as they left.

After a powerful conference, we were given some downtime to rest. The afternoon was filled with competitive games, such as Jungle Uno and Egyptian Rat Slap. Others made bracelets that we could later hand out to the children.

Around 3 o’clock, those who didn’t deliver goats yesterday hopped in the truck along with 10 goats. It was a wild ride with all of the goats, but we made sure to name each one of the goats before handing them to their new family. As we delivered one of the goats to the family a man from the street shouted something to us. Zeke translated what he said: “Thank you for giving them a chance.” We could not believe the selflessness of this man. Though he was not receiving a goat, he knew the opportunity that this family was given.

Josh delivering one of the goats to a needy family. Praying with the families that received a goat.

On our last delivery, there were four children across the street that had been following our truck. One of our teammates got out to play with them and within a minute the children multiplied to thirty.  We ended up singing with them, painting nails, taking pictures and playing games with them for an hour. While we were playing with the children, adults gathered around to watch the fun. They looked like they were having a good time listening to our poor Creole and funny games. We were in awe with how much joy we found in this time. We didn’t want to leave, but we were already late for dinner.

Playing with kids in the city center of Savanette. Megan and Kora made new friends.

Simultaneously, the other group walked around Savanette praying for families and visiting new gardens supported by Many Hands for Haiti. The group made it back earlier than the goat delivery group so to pass time they created a new game. They named it “Our Sweet Game”, where you use all body parts to keep the soccer ball in the circle. We did not get to witness this site as we were delivering goats, but we are excited to play tomorrow.

To end the evening, we enjoyed a thunder and lightning show from our front porch. We were blessed by many Haitians today and can’t wait to see what God does tomorrow. Praise God for the work He has done these past few days in Savanette.

Well, we are off to bed as we are getting up early to hike Mt. Pignon to watch the sunrise.