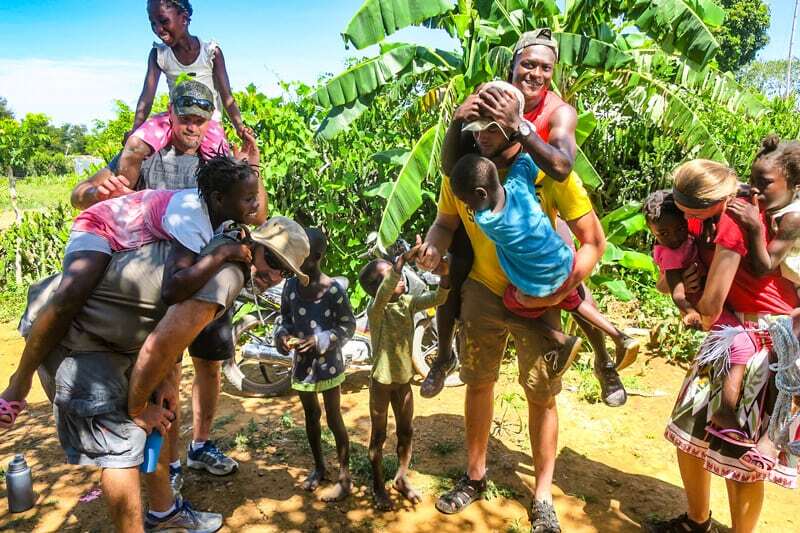 “With all the highs and lows of the day, it was still an amazing day in Haiti with more laughter than tears,” Celebrate Team members, Tracy Bean and Erin Cook, recalled in regard to their day in Haiti.

This morning’s tasks were to paint the exterior of our second house and pour another concrete floor. The house we painted belonged to a woman and her six children.

As we started painting the vibrant colors, neighborhood children kept coming to see what we were doing. We painted their fingernails, gave them beach balls and small cars, and played what seemed to be the Haitian version of Ring Around the Rosy.

Playing “Ring Around the Rosy” with the children Home owner stayed busy by making rope Buying the rope! The finished house!

We finished up with lots of hugs and prayer for the family. Almost all the children followed us home holding our hands before we had to say goodbye.

Group Two helped Jean Rene and the concrete crew mix and pour concrete for a single room and a two room house that were both used by the family. The house had the most beautiful backdrop of the mountain. Using a bucket brigade format, the team quickly finished up and prayed for the family. A few of the neighborhood boys were wearing Knoxville and Pleasantville ball caps as we were pulling out.

After lunch, Claudin, the MH agronomist taught us about the goat program. Families who participate in the Thrive for Five program are eligible to receive a pregnant goat. The only stipulation is they give back the first born female to Many Hands for future distribution to another family. After this, they can keep the kids or sell them when they need money. Four goats were distributed today. We met the women and children as they signed contracts with Many Hands. These women were visibly happy and excited to receive the goats. We delivered them Haitian style on the back of Christi’s scooter!

We also finished painting the bedrooms in the guest house. The phrase many hands make light work was very evident today. Dinner was served by Evenie and Beatrice and was excellent as it has been every day. Legume, a Haitian favorite resembling Gumbo/Beef stew, was served over rice with beans and Judd’s favorite coconut candy, Duece. This was Americanized by Dena and LeeAnn by adding Skippy whipped chocolate – a new favorite staple.

During supper, we ran out to retrieve our laundry from the line because of rain. It was at this time that we realized how much work two women spent hand washing our laundry all day. Something none of us would have had the patience, strength, or skill to do. Devotion by Josie was early as we have big plans for tomorrow starting at 5 AM. With all the highs and lows of the day, it was still an amazing day in Haiti with more laughter than tears.