Celebrate Team – Up Before the Roosters Crow

Today, Celebrate Team experienced Haitian culture through its history and current practices! A visit to the Citadel is almost worth waking up early to the roosters’ crowing. The day’s events will never be forgotten.

En route to the Citadel! Citadel from afar

We were on our way to the Citadel. Our group was up and out of the door before the chorus of roosters began their daily concert. The start of the trip was slow due to the early darkness, many pedestrians, donkeys, goats and motorcycles that shared the road. We noticed a lot of men in route to work in the fields carrying machetes. There were very few lights in the homes as the sun began to rise.

Two goats posing in front of the detailed architecture of a Catholic church in Haiti
We stopped for breakfast in Dondon. Breakfast was warm consisting of fresh roasted peanuts, fresh bread, hard boiled eggs, sweet bananas, and sweet coffee. During our stop, we saw three new puppies along the sidewalk. They looked soft and playful, but we were concerned for their safety because the traffic was heavy and aggressive. We made sure they were safely back on the sidewalk before leaving.
After breakfast, we rode another two bumpy and dusty hours in the back of the pickup. We were ready to be out of the truck. We arrived at the Sans Souci Palace.
Posing in front of Sans Souci Palace!
We were divided into two groups, each having a knowledgeable local guide. The palace showed damage from time, sun and weather, yet it also showed a distinct French architecture. Then, we took a quick ride from the palace to the gates of the Citadel followed by a mile and a half hike up to the fortress. The path was stone and smooth, however it was also very steep requiring some of us to dig down a bit to get to the top. We were impressed with the variety of preserved cannons that were still on display in their turrets.

The fortress’ defense is ready with many canon balls Canon sitting; ready for action
After a quick picnic lunch on the top of the Citadel, we were back in the trucks headed to Cap-Haitien.

Haiti is lush and full of natural beauty Loading the trucks for Cap Haitian!

Cap-Haitien was a very concerning city for public health and sanitary needs. We had not experienced that level of disregard for sense of community in the other outlying areas such as Pignon and Savanette. Even though the rural villages have limited resources and finances, they seem to have a greater sense of concern and pride for where they live and for their neighbors. Some of us saw the ocean for the first time and were disappointed because it was being misused and was not seen as a valuable resource. 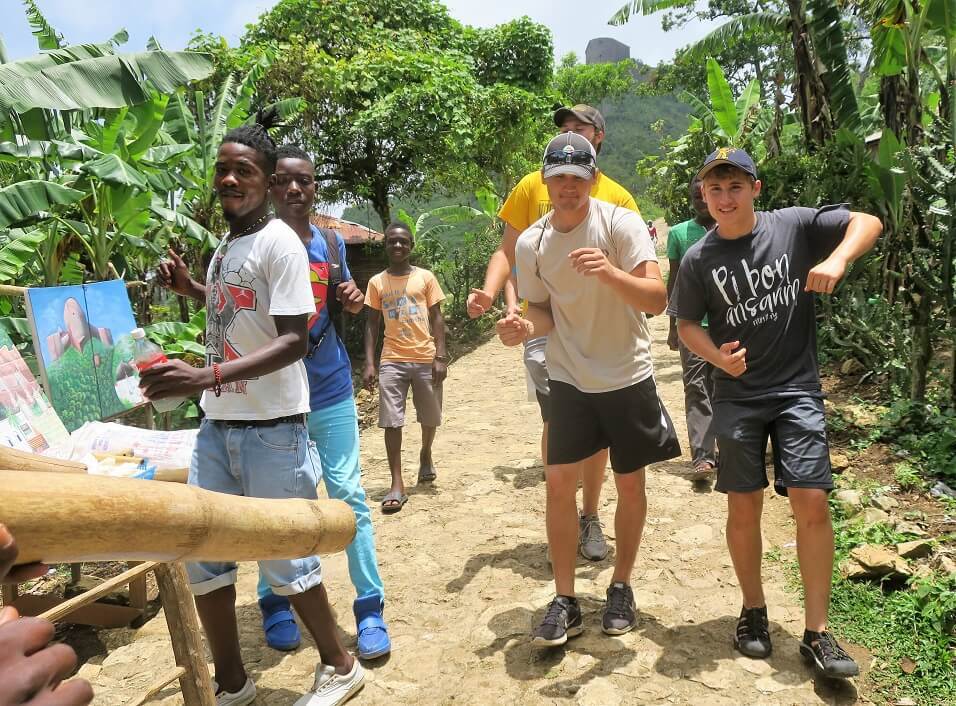 Dancing to the bamboo band!

When in Haiti, you dance Braiding hair is most fun with friends!
Today we saw both history and current events. Historically, we saw community building for a common goal, and down the road we saw the current state of disregard for the Haitian’s homeland.
Our day ended with devotions and prayer.