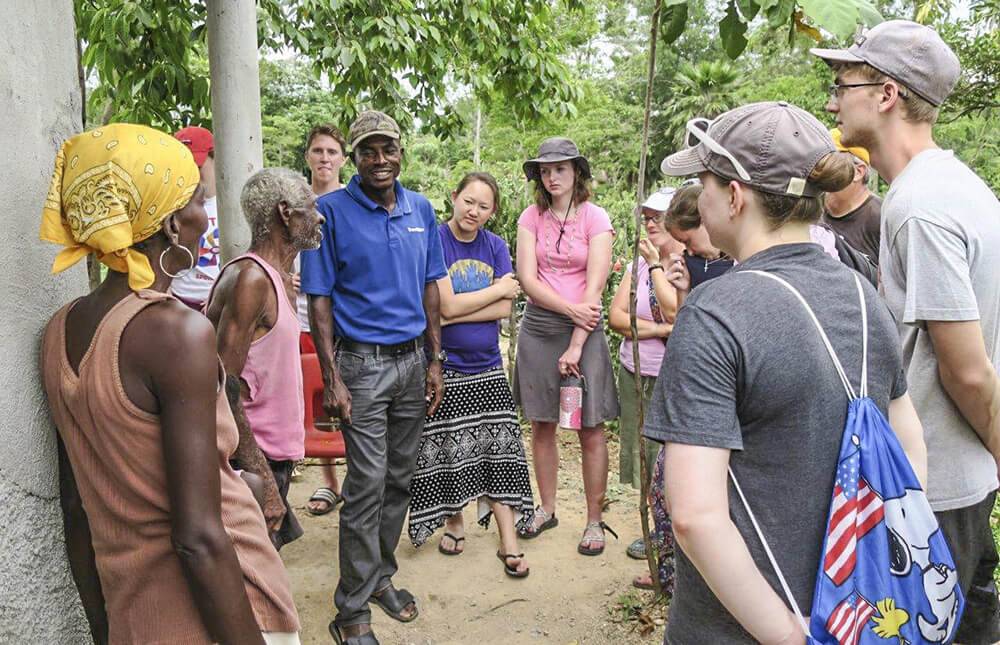 Macy Miner of Central College Team, describes their last two days in Pignon, before they head back home.

Sorry for the delay in blogging. Saturday was an early morning, as half of the group hiked a mountain near the compound at 5 am. The view from the top of the mountain was breathtaking. A few of us felt compelled to quote and act out scenes from The Lion King as we looked over “the kingdom” of Pignon.

-“Simba everything the light touches is our kingdom.”
-“Do you see that dark shadowy area over there? You must never go there.”

We made it up and back down in a little over 2 hours. On the way back down, we played a game of Haitians vs. Blancs. Whoever fell the most by the bottom of the mountain lost. A fall was only counted if your butt hit the ground. Can you guess who won? (Hint: Richelan, Kinzi, and Wilkins were dancing down the mountain like they were walking down the stairs of a house).

Hiking the mountain-started at 5 am

If you guessed the Haitians as the winners you were right. Christi and I both bit it on the descent. I scraped my leg up, along with my ego as I wiped out at least 3 times. Exhausted, (somewhat) bloody, and bruised, we headed back to the compound for a breakfast of egg sandwiches with the rest of the group at 9. Talk about a productive morning! It was such a great start to the day. Looking out over Haiti as we listened to “Amazing Grace” atop the mountain really left me speechless. It was awe inspiring to see the magnitude of God’s creation.

Later in the day, a few group members headed to the market to shop and explore. Others stayed back and napped or rested as exhaustion and heat have really begun to take their toll on a few of us.

After everyone returned to the compound, we piled into Pouchon’s truck and headed out to bless a new home built by Many Hands. The house had been completed for two weeks but the family would not move in until the Many Hands staff came to bless it. The family consisted of a wife, husband, and their two young daughters.

The family with a new house organized by MH, ready to dedicate the house to the Lord

The father of the family looked to be in his seventies, and had difficulty moving around. He was concerned that he would not live long enough to inhabit the house with his family. He explained to us that he was so happy to see the day that his family was all together under one roof again.

We blessed the home by encircling it hand-in-hand and praying. This was an extremely moving moment because we were not only blessing this home but we were bringing a family back together through God’s will. Yes, God gave Many Hands the tools needed to build the this family a house, but God made it a home through uniting father, mother, and daughters once again.

After the blessing of the home, we completed our last food distributions of the trip. How crazy is it to believe that our time here is almost over. It feels like just yesterday that we hopped off the plane in Port Au Prince.

Although our time left is limited, God is far from done utilizing us as his tools of love and generosity. A few group members tagged along to help Liz make a special delivery to a neighbor. A few weeks prior, this man was given a Bible, and was so excited he began quoting scripture right from the Bible. He told the Many Hands staff that he wanted to go to church so badly but did not have clothes to go. Liz decided to buy him a church outfit along with a Creole songbook. When they gave him his gift, he was so overcome with joy that he started singing right away. The joy was contagious, and carried into the rest of the day.

We ended the evening with a private screening of “Into the Woods.” (By private screening I mean Craig rigged up his projector and popped us popcorn) It was a nice change of pace to sit back and relax. Halfway through the movie, we began dropping like flies from exhaustion. By the end of the movie only four of us remained, and the other four had gone to bed. It was after the movie ended that we had our second tarantula encounter of the trip. I must be a tarantula magnet or something because of the two we’ve seen, I’ve found both. This one was on the stairs and I almost stepped on it on the way down. Craig came to the rescue with his fly swatter and killed it. I am beginning to fear every shadow, spot, or discoloration of the floor once it becomes dark. Last night I had to get up to use the bathroom and laid in bed for twenty minutes debating if it was worth it to break the seal of my mosquito net (the only thing protecting me from tarantulas at night). I ended up deciding to get up but not before I shined my flashlight on every square inch of the room, hallway, and bathroom.

Sunday we got to sleep in! We woke up around 7:30 and had a delicious breakfast of pancakes made by Liz and Lindsay. We then headed to church. The church itself was a roof held up by a few posts. With a nice breeze flowing through the church, we listened to Pastor Lumanès and praised God in all his glory. Halfway through the service, the men’s choir sang a few songs for us. Our team also went up front and sang. We sang “Sanctuary” in English for the congregation. After that song, we tried out our creole and sang “Jezi renmen Timoun” (Jesus loves me). The children giggled uncontrollably at our accents as we sang, and we had a blast.

After church, we went and met Lumanès’ 11 day old grandson Orrinn. He is a doll. When I say he was a tiny baby, I mean tiny. They think he was born 7 months into the pregnancy so he was a little early. He was utterly adorable and we could not get enough. Next we headed into Pignon for a lunch of rice, beans, and chicken at a local restaurant.

Right now we are all resting before heading out to the orphanage for the afternoon. We have a soccer game scheduled with the kids, and are conserving our energy. We leave for Port Au Prince after lunch and fly home on Tuesday so this is our last afternoon in Pignon. God has shown us so much grace in the one week that we have spent here, and this experience has been life changing.