Conquering the Haitian Roads – Behind the Wheel

Blog is written by Conner Kelderman, a sophomore at the University of St. Thomas in St. Paul, MN. Conner is at our grounds in Gonaives, Haiti.

Today (Monday), Matthew and I set off into another busy day with Silentor. We were able to experience a Haitian bank, furniture store, and cyber cafe. We visited the school where Silentor’s brother (Leboise) teaches, and took a ride in a TapTap. A TapTap is a Haitian taxi. It’s a pickup with benches in the back and a cover over your head. TapTaps are the most frequent mode of transportation used in Gonaives, the third biggest city in Haiti.

Going to Leboise’s school was a great experience. Even with a language barrier, there are universal things that make being with the kids enjoyable. Without a word being understood from each other, we played a game similar to patty cake with kids and also a game similar to bloody knuckles. If you’re planning on coming to Haiti someday, ask about these two games. They are great ways to have fun with the kids. Instead of bloody knuckles, you slap the tops of each other’s hands. My hands were beat red by the end of it. Even Silentor had to chuckle at the redness.  Still, if you don’t know these games, I’m sure the kids will get plenty of enjoyment seeing a blan (blond/white person) and rubbing your skin admiring the color changes with pressure.

After a fabulous lunch of Haitian spaghetti prepared by the cooks at the house, Matthew and I sat in on some meetings about the school. Only catching bits and pieces of what was being said, it was fun to be around to see the progress for the school. The land was appraised today as well in order to get the final papers started. Once these meetings rapped up, we headed to the site of the school itself, Mission Etoile. In the meetings, there were talks between Silentor, Leboise, and Woody – Silentor’s cousin who works with them – about things they had heard and learned that will help the school succeed.

At Mission Etoile, another game of footbol (soccer) was arranged and Matthew and I took the field with about 15 Haitian kids aging from roughly 8-15. Each of them playing barefoot on the rocky dirt field, their moves were too good for this slow blan. Few words are understood but smiles are good enough to communicate joy to each other. One word is understood though in both languages: GOOOOOLLLLLL!!!! I did manage to score a couple of goals, but it’s the fun with the kids that makes all the sweat and dirt worth it.

I don’t think you can’t fully understand Haiti and how things work until you come down. I told Silentor when we were driving around today that there is only so much you can explain and tell someone. You can see pictures and hear stories, but nothing hits home until you see it, you feel it, and you completely experience it. I praise God for what He is doing through Many Hands for Haiti and allowing me to be apart of it. I’m so thankful for Silentor and how he has chosen to give up the amazing American life he had, to live the way he does now.

So many of us, including me, forget how blessed we are in the States. We have worries that mean so little in the grand scheme of things. Getting to see how much the “180 for Haiti” campaign will mean to these kids and this community has been amazing. I cannot wait to come back and continue to see the progress in May. Matthew 5:16 says “Let your light shine before men so that they may see your good deeds and praise your Father in heaven.” May this be the way Mission Etoile continues to grow and show the people of Gonaives the abundant grace, hope, and love of our Father. 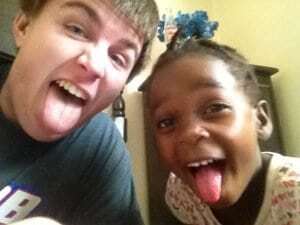 And another day began this morning with a beautiful, cool breeze outside with kids playing before I rolled out of bed. Silentor and I worked through a spreadsheet getting the scholarship kids’ information in order. The printer is now fully functional with Silentor’s laptop and paper has already been hot off the presses for Mission Etoile. Later in the morning, five guys (Silentor, Leboise, Woody, Matthew, and myself) took off for northern Gonaives to a village called O’portal and visited a rural market. All sorts of goods were around, especially things that came from the farms directly.

After lunch, we headed to Mission Etoile’s site. The trip was a little bit different because I was behind the wheel! Silentor asked me if I wanted to drive and I very eagerly took on the busy Haitian roads without a problem. It was very fun but of course I was very careful. When we got to Mission Etoile, we had some questions for the girls in the Girls Empowerment Program. Seven girls faced two blans (Matthew and me) with Mr. E. (Silentor) translating. Matthew and I asked questions just to stimulate the conversation, wanting to learn more about these girls (aging between 16-25) life in Gonaives. Their main point was respect for themselves leads to a better life for girls their age. I found this very interesting because they didn’t want sorrow for the conditions they live in or anything like that. Self respect is an attribute that everyone wants to have, but for some is just hard to obtain. They were very open to their lives and were eager to help girls in their neighborhood not in Mission Etoile find a sort of self respect and better life. I asked what they wanted most out of American groups that came down and they said just to have conversations like the one we were having so that everyone can learn from each other.

Once our conversation wrapped up, another footbol game was waiting for Matthew and me so we joined. Just like the days before, each kid played with nothing covering their feet. I even saw a boy stop, lift his foot up, and pull a thorn that had logged itself into the bottom of his foot. To my surprise, he pulled it right out and continued to play like it was nothing. A little later, I got involved in the bloodiness and had a piece of barbed wire from the makeshift fence surrounding the field stab my arm. But don’t worry mom, I’m ok with just a little dot of scab to show for it!

With the week half over, I pray that God continue to be alive in this trip as He has been thus far. We are slated to visit Silentor’s home village just south of Gonaives tomorrow and go to Mission Etoile again. I’m sure the kids will be more than ready to play another game of football. Just like the girls told us, we may be physically different, but we are all still God’s children striving to love on and help one and other. What an amazing reminder of God’s love for ALL His people.