Donzaleigh Powell , with Cumberland University, shares how serving can lead you to unexpected places.

The second day in Haiti has been a complete adventure etched in my mind. We started off the morning with a brisk hike up the Pignon Mountain, breakfast, and then a trip to the local market. All of which were an adventure in and of themselves but the highlight of the day, in my opinion, was our trip to the orphanage. We did not know what to expect and when we arrived we did not see many children. We spoke with the couple that runs the orphanage and they soon had the children come out to see us. They were somewhat reserved at first but very quickly grabbed our hands as we walked up to the patio.

We opened a bag full of goodies the children could play with and they each lit up with excitement. Most of the younger children went for the coloring books and crayons and we sat together at the table to color together. Some had hoola hoops and were able to imitate us very quickly as one of us demonstrated. Several of the other children were boys and they started off with the guys on the soccer field. Then the girls proceeded with doing our hair in braids and actually did a pretty good job to be so young. Oh but then big fun came out when we pulled a colossal parachute from its case. It was a sight to see, large brightly colored fabric being held around the edges by young and old. On three, we said and we all would bring the parachute from the ground straight up in the air where the wind would catch it and the children could run under it from side to side.

Closer to the end of our stay at the orphanage, we swung on the swings and played basketball with a couple of the older children. These were not any ordinary basketball games; these were full fledged competitions once we saw how good they played. It started off two on two and the “bet” was whichever team reached 10 first won candy. We thought we would take it easy on the children and have no trouble winning but boy were we wrong. The final score of the first game was 10 to zero and we had to fork over the candy. The second game was even more intense as we added two female players. Only those there that day will understand how the teams were chosen and forever have a fond memory of how quickly roles reversed. The game wasn’t finished and we heard the TapTap start and we tried to ignore it because we weren’t ready to go, however; the time had come and we had to stop and prepare to leave. We told each other good game and both us and the children looked a little disappointed but both happy to have had the chance to meet.

Day two was a day to remember. A day that taught us not only how physically strong we are but also how mentally strong we have to be. We are still in the beginning stages of processing all the information and emotions that comes with a trip such as this. We are thankful to God for showing us the beauty of the land, the determination of the people, and ability for a smile to be universal.

We began the next morning by attending a traditional Haitian church service. It was very moving watching the pastor speak so passionately about his sermon. After he spoke, we were honored to sing along with Kenzie, Liz, Dr. Inman, and Brandon. 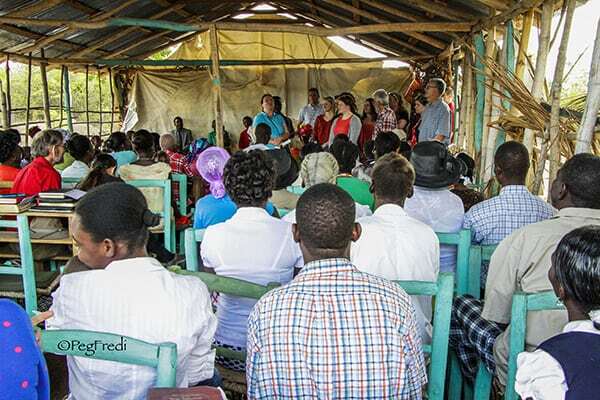 After church we all enjoyed lunch at a local restaurant. Our meal at Pas a Pas Bar Restoran was delicious and came with a live audience of chickens.

Lunch at a local restaurant

Once we finished our lunch we bought supplies for the food distribution. We traveled to a poverty stricken town named Bi. Here our team dispersed rice, pasta, beans, cooking oil, and bouillon cubes to eight families that were in desperate need. The families that were chosen by their local community leader did not have access to resources such as clean water and proper food. Before passing out the food we would get to know the families and their background stories. Once we gave them their food, as a group we would all pray with them. This was a very humbling experience to be able to see gratitude in its purest form. It is such a blessing to know that these eight families will be able to go to sleep tonight with a sigh of relief. Our team is thankful that we were able to bring good news to a broken community.

Day three has come to an end and it was quite an emotional roller coaster.

Catch up on Cumberland’s days 1 and 2 here.