Katlin Eakes, of Cumberland University, describes how God moves in her heart, through the many experiences of Day 4.
Today was a whirlwind – the likes of which I’ve never seen. I first woke up at 04:30 to what was surely a freak accident, but I woke up freezing cold in Haiti! When I woke back up at 06:30 (still somehow freezing), the compound was buzzing. Haitians were already arriving to the Leadership Conference out of sheer excitement, team members were scrambling with last minute details, and I was trying to figure out what it was I was eating for breakfast.
We all walked over to the equipping center to a joyful noise. If you’ve never seen Haitians sing God’s praises, then you’re really missing out. You can truly feel His presence in the air.
As the bunch of “blancs” were smiling and dancing around and Haitians were smiling and just exuding joy, something extremely cool occurred. They began singing a hymn! I thought to myself, “wow, this sure sounds familiar.” As it turns out, they were singing “Nothing but the Blood of Jesus” in Creole. I was able to sing along in English, and all we were singing about was “What can wash away my sins? Nothing but the blood of Jesus.” How beautiful of an experience, to praise God when you had no idea what each other was saying, but at the same time you still understood exactly what was occurring. We may come from completely different worlds, but we all praise the same God.
Praising God and dancing is nothing short of joy
We then decided to kick off the conference with an example set for us in John 13. In this chapter, Jesus washes His disciples’ feet to humble Himself before them. We decided to do the same thing. We washed everyone’s feet. I’m not going to lie, I was a little leery of this process at first but when it came time to do it, I just knew what to do. The very last woman whose feet I washed laid her hand on my shoulder and said in English, “thank you so much, really. God bless you.” As I worked to choke down tears, I was so humbled. This woman did not know me from Adam, but she was so appreciative of everything we were there to do.
The conference started and I was only there to be a sideline player and help the group who was presenting first. I honestly saw the students in a way I had never seen them before. They were very awe-inspiring and held the audience’s attention captive. Katie finished her part with a poem by Mother Theresa called “Do It Anyway.” If you have no idea what this poem is, I heavily suggest that you look it up. In the midst of all the different kind of barriers we experience, be kind, forgive, and love anyway. Haitians were literally finishing the lines for her with “Anyway.”
After the group finished we had another worship and praise session. It took lunch awhile to finish, so the worship continued for quite some time. When the food was finished we served the attendees lunch. Jessica, Sam, Chelsea and I worked alongside the Haitian cooks piling up plates and again I was humbled.
After lunch the afternoon session began and my group went out to Pignon to distribute food to six families. We did this on Sunday, but I can honestly say I felt so much more connected today. We had a much smaller group of six, and we were able to make some personal connections.
We did have an extremely difficult moment today while visiting with one of the families. Christi always asks whoever we’re serving if they know Jesus as their savior, and this woman just straight up said No. She didn’t know when Jesus would come. She did not believe in Him. She thought it was too late for her and her household to decide to follow Christ. 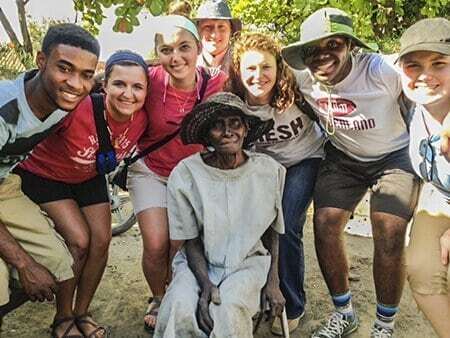 As I was struggling to understand what I was hearing, I saw a God moment happen right before my eyes. Our two translators began preaching to them. Now at the time, we had no idea what was being said but afterwards we got the general idea of what had transpired. They had explained to the family that it is never too late to make that change, to repent, and begin a new life with Christ. The man of the house asked them if they would come back and talk with them further about God, and a woman in the house assured us that she would make sure everyone would be at church this upcoming Sunday.  I felt extremely privileged to have witnessed such an occasion.
At a different house, Katie, Sam, and I were outside and all of these little girls ran up wanting to play with us. The six of us began a very intense “Patty-Cake-Off.” It was so much fun just seeing how happy we were making them. When we had to say bye, they looked distraught. When we arrived at the next house we were amazed because these children and their fellow neighborhood kids had cut streets to follow us. We played together again, and we had to say another painful goodbye. It was wonderful seeing their happiness during our short time together.
We picked up the rest of the crew after the Leadership Conference concluded for the day. Let me tell you, fitting 12 people into the back of a taptap is quite a job. That’s not even counting the 5-6 people inside the actual can. In case you don’t know, a taptap is essentially a pickup truck with a couple of benches and bars thrown in the back. Now imagine a Toyota with 12 people piled up in the back and literally on the hood of the truck driving down a dusty, EXTREMELY bumpy road. If nothing else, it was an extremely intense team bonding moment.
Snuggle up close in the Tap Tap
We headed down to go cross a suspension bridge settle peacefully across a river nestled in the mountains. It looked like the setting of a fairytale. Although this fairytale view was hard won after climbing to the summit of Mt. Pignon yesterday – my muscles cried the entire way there and back. We all crossed the bridge (some of us more forcefully than others) and just all looked out over God’s beauty. To say any of this world could happen by accident is honestly just foolishness. This world was created by an artist with only the purest intentions. None of this could have occurred by accident.
We stand in awe of His beauty!
After we finished looking out at His work, we hastened our way back across the bridge because there were many of us getting anxious about the motorcycles waiting for us to move out of the way. We all piled back up in the taptap singing “Olay, olay, olay, olay” at the tops of our lungs for literally no reason at all.
We were asked tonight what the biggest challenge of the day was. I could say something like I had no idea if I was washing feet correctly, or even that overloaded taptaps are uncomfortable on one’s dairy air. But the hardest part of today was hearing someone say they did not know God. To me, He is such a monumental part of my life I cannot even begin to imagine any other way, because without Him I would have no life. Not knowing Him would be to have a life with no hope. I cannot begin to imagine what it would be like living everyday thinking this was it, that this was the end game. This may be my opening act, but my main event is spending eternity with Christ. That is what I strive for each and every day. I don’t know the struggles of these people, and I cannot even begin to  fathom living this way every day. But if I did, I cannot imagine thinking this would be it. A life lived for God gives life purpose and something to truly live for. Some people are alive 100 years without ever really living a day. I want to live every day for Christ.
We were also asked what our greatest blessing was. Today was honestly such a blessing all in all. If I had to pick a “greatest moment” it would have to be realizing a growth in my walk with Christ. I’ve been struggling for awhile now with wondering if I’m doing enough. One of my main reasons for wanting to make this trip was to strengthen my relationship with God. Yesterday climbing Mt. Pignon, I felt it was a metaphor for so many things – nursing school, relationships, life, etc. If I could overcome that mountain, I could overcome all the other obstacles in my life. Yesterday I felt a sense of peace come over me, but today I felt a sense of true growth. That is something I’ve been longing for, for quite some time. Today, I am truly blessed!