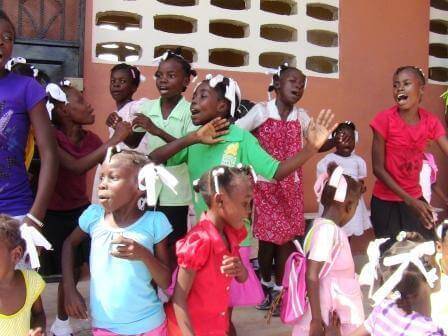 This is written by Kyle Pals, a member of the ISU trip. He is serving in Gonaives, Haiti this week. This is his first time in Haiti and serving with MH4H.

Today, for our second day at the school, we started out by doing a Goliath vs. David skit for the kids which they seemed to really like. Dave played the part of Goliath, Allison played the part of David, Colt played the narrator and Katy, Emily, and I played the parts of King Saul and his army. Afterwards, we split the kids into two groups for sessions of English. Group 1 was led by Colt, Dave and Katy; they taught 1st and 2nd graders. Group 2 was led by Emily, Allison and I, and we taught the3rd graders. My group taught the kids their colors, body parts, days of the week, months and other items you would find in a classroom.
Girls dancing after school at IMEG.

Once we finished the first part of our lesson, we split our 3rd graders into two separate teams and played a game. Next, we got all the kids together and brought out Frisbees as the sport of the day. We had each leader take a group of kids and teach them how to throw a Frisbee and eventually play a game.  I was lucky that I had a translator in my group and he thought of a nice game to play which consisted of throwing the Frisbee around and if you were to drop it, you were out.  I looked around and saw everyone playing and having fun which was very exciting to see. Then eventually, it was time to pass out the food to the kids and then we went back to the mission house to chill for a couple hours before going back to the school.

The ISU group picking weeds at the farm.

Once we got back to the school, we went to the small farm and picked weeds for about an hour. We then walked back to the school to begin our second class of Creole 101. We seemed to have learned twice amount of phrases as we did yesterday. After our class, we hung out, played, and danced with the kids for about an hour before heading back to the mission house. For supper, we had delicious Haitian spaghetti, watermelon, and mangos. Katy put way too much hot sauce on her spaghetti and ended up with a numb mouth. She then proceeded to break a chair which was the great laugh of the night.